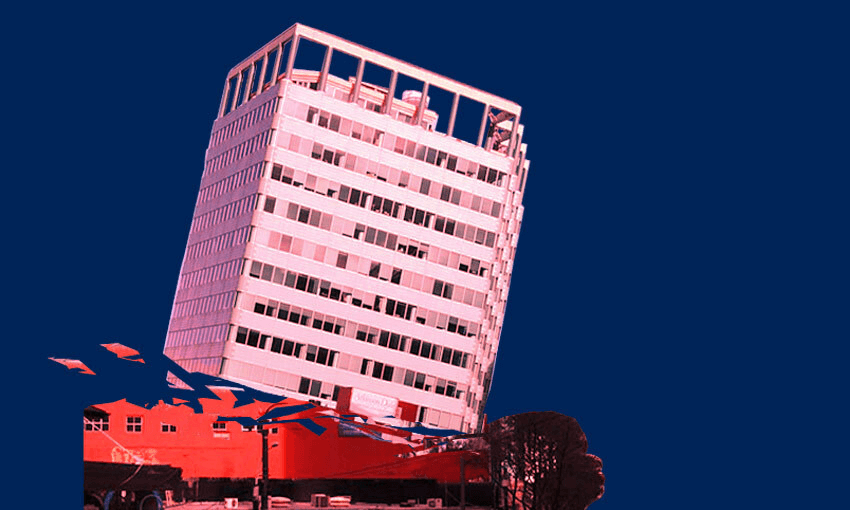 Bernard Hickey: What comes after ‘Greed is Good’?

The proudly avaricious era of business is ending, but will what comes next save capitalism from its self-destructive spiral?

It was a nondescript tweet that I would normally scroll past, but for some reason I stopped and let it sink in when I saw it earlier this week. It screamed “emperor’s new clothes” to me, a sign of of our warped and dangerous times:

I had just watched some wild footage of Hurricane Ida wreaking havoc in New York and America’s South, including a man floating down a water-filled subway tunnel. While smoking a bong. And US president Joe Biden had linked climate change to Hurricane Ida and the never-ending bush fires ravaging America’s western states in recent months, including one that has burned for 32 days in Idaho that is called ‘Scarface’. So I was attuned to America’s climate malaise.

Of course Microsoft had sent its thoughts and prayers to those facing climate ruin. Of course it had pledged to be carbon negative by 2030 and had donated $1m to the Red Cross to help the victims… But what was it actually doing to ensure climate change policy action? Emily Atkin, who publishes a climate newsletter called Heated, had followed up to see where Microsoft’s political donations are going while it offers its “thoughts” to the victims of climate change. Atkin found that in the previous three months, 62% of the political donations made by the world’s second most valuable company went to politicans who deny climate change .

“The majority of Microsoft’s 2022 midterm contributions this summer went to Republican individuals and PACs, many of whom are outspoken climate deniers and climate policy obstructionists, according to an analysis of Microsoft’s latest round of political giving,” she wrote.

This reeks of the cynicism we see so often from large companies pledging to do the right thing by the environment, society and those left behind by the massively widening wealth gap. There is now a thriving consulting industry (expected to generate US$37b in fees by 2025) that helps corporates buff their ESG (Environment, Social and Governance) credentials and appeal to the funds under management labelled “ESG-friendly”. By 2025 those funds are expected to be worth US$53b, or a third of all managed funds.

“Where we put our money has the power to change futures,” KPMG gushed in its 2019 publication on sustainable investing. It’s worth reading the full quotes to marvel at the emperor’s new clothes in full effect:

“Today, with a growing awareness of the social impact of financing decisions and in the context of climate change and resource scarcity, this idea has begun to shape the investment landscape,” the report reads.

“Embedding environmental, social and governance (ESG) factors into financing decisions is now a core concern. Investors want to balance risk and return and ‘doing the right thing’. Governments and regulators are concerned for long-term economic and social stability. Asset managers and asset owners see ESG and responsible investment as a smart way to achieve competitive advantage. As the younger generations become more active in the market, demographic shifts are creating a growing community of responsible investors.”

The trouble with all this performative corporate activism is it’s changing nothing and only feeding the cynicism of a generation who are working out they are the biggest losers of a post-GFC and Covid era. They’ve watched agog as their governments printed money to pump up asset values and bailed out corporates, rather than investing in helping the poor and lifting up the young, many of whom are struck with long Covid.

The wave of ESG enthusiasm appears to be mere virtue-signalling that actually does little to change the facts on the ground. The share of US GDP going to the owners of capital has almost tripled in the last 30 years to 15%, including another massive spike in the last year since Covid.

There was a time when the masters of the universe wore their capitalism on their sleeves. They preached it would save the world from the inefficiencies of socialism, or even worse, the dictatorships of communism. Now those days are over, but what will replace shareholder capitalism?

This week on When the Facts Change I spoke to University of Chicago finance professor Luigi Zingales, who hosts the Capitalisn’t podcast with Bethany McLean, the investigative financial journalist who exposed the Enron scandal. Recently Zingales has been writing about how to reform capitalism, including editing a collection published to mark the 50th anniversary of economist Milton Friedman’s clarion call to focus exclusively on creating value for shareholders.

If you haven’t read Friedman’s 1970 article in the New York Times, ‘The Social Responsibility Of Business Is to Increase Its Profits’, you’ll get the vibe by watching Oliver Stone’s 1987 movie Wall Street, and in particular the scene where Michael Douglas’ Gordon Gekko appeals to fellow shareholders to approve his proposal to kick out the board and carve up Teldar Paper.

“I am not a destroyer of companies. I am a liberator of them! The point is, ladies and gentleman, that greed, for lack of a better word, is good,” a slicked-back Gekko tells the annual meeting.

“Greed is right, greed works. Greed clarifies, cuts through, and captures the essence of the evolutionary spirit,” he says to applause.

“Greed, in all of its forms; greed for life, for money, for love, knowledge has marked the upward surge of mankind. And greed, you mark my words, will not only save Teldar Paper, but that other malfunctioning corporation called the USA.”

In a way, Gekko was right. America went on to win the Cold War two years later and embarked on a frenzy of End of History triumphalism that ultimately led to the global financial crisis. Yet that was resolved by US$10t of money printing and the rescue of America and Europe’s biggest banks and corporates. No CEOs went to jail.

The same thing is happening again. Another US$11t of money has been printed since the eruption of Covid-19 in the western democracies in February 2020. Asset prices are up 60% and even in New Zealand the rich have done spectacularly well, seeing their household worth rise $400b to $1.5b while disposable incomes for renters have fallen. The top 15 global corporates are now sitting on US$1.1t of cash.

Zingales used to be hopeful that democracy would rectify the excesses of capitalism, but has seen in the last decade that powerful corporate interests have screwed the scrum of the world’s biggest democracies by launching culture wars to distract from massively widening inequality.

He proposes restraining the most egregious abuse of monopoly powers through anti-trust authorities and the regulation of large firms to prevent the abuse of power.

But he is now more sceptical, noting the growing influence of the largest companies within democracies, and in academia. He points out that the only times in history when massively wide disparities between the rich and the poor were removed was during wars and pandemics, where the majority of wealth was destroyed.

We have a pandemic. Let’s hope we don’t need wars to do the job.