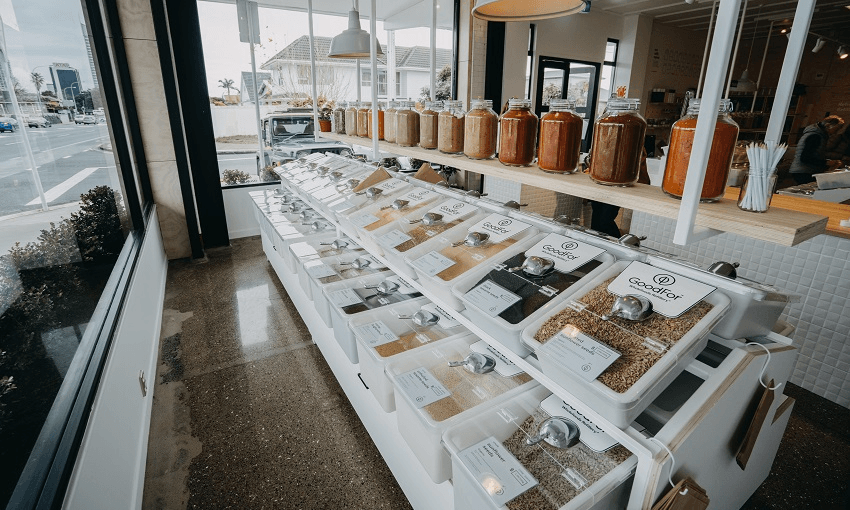 Plastic-free refilleries such as GoodFor are also capitalising on the trend of experience retailing. (Photo: Supplied.)

Out-of-packaging experience: The rise of the plastic-free retailer

Plastic-free refilleries such as GoodFor are also capitalising on the trend of experience retailing. (Photo: Supplied.)

Refilleries such as GoodFor and Be Free Grocer say their time has come, with consumers from Ponsonby to Palmerston North seeking a zero-waste option.

Horror stories such as sea turtles being found with hundred of pieces of plastic in their gut are shocking people into realising the planet will slowly strangle if we don’t stop using plastic packaging.

This awakening is leading to increasing demand for plastic-free shopping options, and retailers such as GoodFor are capitalising on the trend.

The wholefoods refillery already has four stores in Auckland, and is set to open another five this year including in Wellington and Christchurch.

GoodFor sells bulk organic staples such as grains, beans, herbs and spices, cereals and coffee, and customers can bring whatever kind of container they like to fill up. They can also purchase online with the goods delivered to them in paper bags.

The company’s vision is to help clean up the planet by making sustainable shopping easier for the everyday customer. Founder James Denton concedes this has meant beginning at the affluent end of town. GoodFor’s existing stores are in the more moneyed Auckland neighbourhoods of Ponsonby, Takapuna, Parnell and Mt Eden, because the company felt it was necessary to build a premium brand first to give bulk food shopping a different feel, he says.

“Our whole goal has been to make bulk food shopping quite trendy and very trustworthy. That’s why the aesthetic of the stores is so clean and design-focused.”

Because GoodFor’s products are organic it also makes them pricier than standard fare. But when you compare like-for-like, the stores are more affordable than you might think, he says. For example, a 250g bag of organic quinoa costs 30% more in a supermarket than the same amount bought from a GoodFor bulk bin.

“If you shop smartly in our stores you can get away with spending not much at all,” he says. “That’s something we’ll start to push once we get a bigger footprint of stores.”

While it does plan to widen its appeal, GoodFor also sees its role as being a beacon for change.

“The whole basis of what we’re doing is we’re not going to change everyone’s behaviour. But we’re making a name in an affluent part of the market and that filters down to other companies.

“I don’t think it’s too much of a coincidence that we’ve opened up and made a lot of noise about plastic pollution in the last two years. All of a sudden, the big players in market have also started to put their hand up and go ‘hey, we’re going to get rid of these parts of plastic consumption as well’.

“It’s just a slow filter. At some point, supermarkets might give that larger section of the market the ability to shop plastic-free.”

Kiwibank business manager Mike Mangino says GoodFor is at the forefront of a new business model, and it’s the kind of up-and-coming enterprise the bank wants to be working with.

“With GoodFor it’s not all about making money, there’s a big focus on plastic-free and the environment and giving something back,” he says.

That’s meant a learning curve on both sides. “Traditional banking I suppose has been very focused on understanding profitability and the ability for a business to repay debt and grow. But if that’s not their only focus it’s a different way of operating,” he says.

Having said that, he and GoodFor’s accountant whom he’s been working with closely have been able to bring their older heads and experience to the cause. “James is an entrepreneur, a marketer. He’s got a great concept, a great idea, and we’re balancing some of that up.

“At the end of the day businesses only survive through cash, and if they’re not turning whatever great idea they have into a profitable, cash-making business then eventually they struggle,” Mangino says.

“There are only so many levers a new business owner can pull. Sometimes they get a bit over-complicated with everything they’re doing, but the reality is they manage two or three key aspects and that’s a bit of what the accountant and I are looking at now.”

Mangino says GoodFor’s ultimate challenge will be to take the plastic-free message to a wider segment of the New Zealand market.

“Your average Kiwis aren’t necessarily quick to change how they operate things. So there’s an element that they’re targeting a particular demographic that’s probably quicker to change than most.

“But how do you take it to the next level where it becomes almost the norm?”

Be Free Grocer is aiming to bring that message to a wide-ranging provincial audience.

The zero-waste bulk foods, personal care and homewares retailer opened in Palmerston North just before Christmas and has been pleasantly surprised by how well locals have embraced the concept.

Managing director Bronwyn Green did an informal survey of around 170 people via social media before launching, and one of the questions she asked was whether affordability or going organic was more important to them. “Overwhelmingly, people came back with affordable,” she says.

The family-run enterprise is already seeing all walks of life come through their door. “Our goal is to donate a significant percentage of our profits to conservation once we get underway, and I think our ‘why’ is really resonating with people.

“Sometimes with regional New Zealand, there’s this perception we lag behind and it’s like ‘are we ready for this concept?’ What I got back is ‘yes we are’.

“I know this is really hard to achieve, but I didn’t want to have a ‘type’ of person who comes into the store… which is why I focused on having our price point affordable.”

Retailers such as Bin Inn have been around in the regions for a long time, so shoppers are used to the concept of bulk buying, she says.

Be Free Grocer sells everything from bulk pantry staples and packaging-free shampoo bars to reusable lunch boxes and straws. Green’s hope is that customers will come in for one thing, and then see other zero-waste options they hadn’t thought of.

The increasing demand for plastic-free purchasing runs alongside two other significant retail trends, James Denton says: the rise of online shopping, and the desire for experience-based retail. It makes sense for people to have food delivered directly to their door, and the online market will keep advancing. But equally, people aren’t robots – they seek human interaction and interactive experiences.

“That’s where these wholefoods concepts and out-of-packaging concepts are going to continue to grow. GoodFor is building an experience-based environment where you go in there and you’re really close to your food, you’re scooping it yourself, you’re grinding the flour or the coffee yourself.

“I think that’s where retail has to go.”