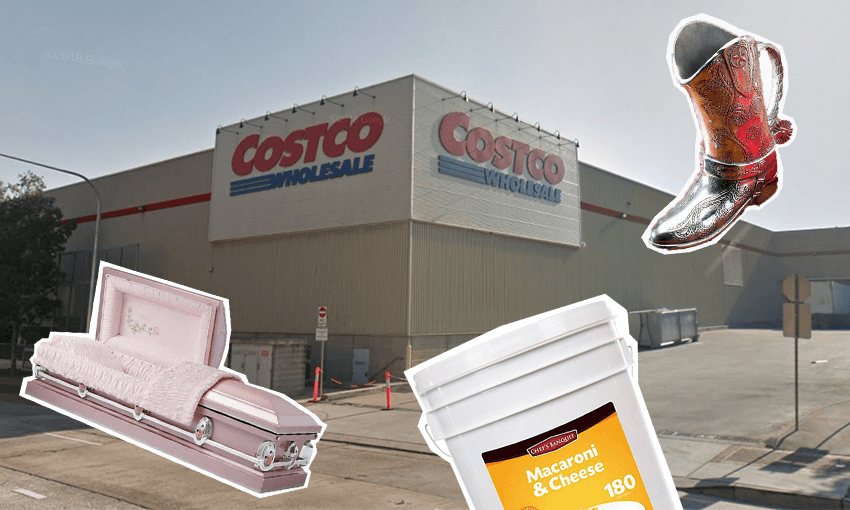 Costco is on its way to New Zealand, parking up in Auckland’s Westgate shopping centre, and offering locals the chance to shop for petrol, groceries, homewares and tyres in one building.

New Zealanders love a bargain, and the world’s second-largest retailer promises to deliver better bargains than even the red shed can offer. So what’s the catch? What is a Costco? And will it work here?

Not to be mistaken for the South Island’s premier Asian supermarket, Kosco, the US company built its brand on the truism that people don’t like spending money. In cheap-goods market that seems like it’s already saturated here with Kmart, The Warehouse and PAK’nSAVE, Costco’s niche is in wholesale.

Competing next to brands like WalMart overseas, Costco makes its money from being a subscription service, charging an annual price to reap the savings benefits of buying 12 kilos of peanut butter in one go. In the USA, this subscription costs $60 per year, and for this the company claims customers get 25-30% off their weekly shop.

In America, Costco has been both praised and ridiculed for its incredible range of products. From coffins to flat pack saunas, groceries to life insurance policies, it’s a dream store for someone who likes to tick every errand off their list in one place.

We can expect that the New Zealand branch will have a petrol station, electronics store, grocery store, tyre station, optometrist, food court and more, according to Tuesday’s announcement.

Will it be good for New Zealand?

Costco says the new Auckland store will provide around 350 full-time jobs. The company is known for good wages, too, paying workers (in 2013) an average of US$20.89 an hour, compared to the legal minimum wage of US$7.25.

Company directors have been quoted arguing that paying good wages helps the economy, while ensuring staff stay in the company for longer. The company also say over 80% of their employees are under company-sponsored health insurance.

CEO Craig Jelinek told Bloomberg Businessweek in 2013 that the theory behind these benefits is simple. “I just think people need to make a living wage with health benefits, It also puts more money back into the economy and creates a healthier country.”

But what about Costco’s prospective NZ competitors, big-box stores like The Warehouse and PAK’nSAVE?

Foodstuffs external relations manager Joanna Braeckel told The Spinoff that while the company welcomes competition, there is more value in local brands who invest solely in the New Zealand market.

“We’re confident we can compete, particularly with PAK’nSAVE… Critically, we are committed to New Zealand manufacturers, growers and suppliers, helping them innovate and thrive. Unlike our existing Aussie competition or a new kid on the block like Costco, our earnings are reinvested in the New Zealand economy, people and community.”

If the experience across the ditch is anything to go by, Costco is pretty good at expanding its empire. It’s been in Australia for 10 years and now has 10 stores there, so if it goes well for them in West Auckland that store could be just the beginning.

When can I get my hands on these juicy deals?

The store won’t be opening until 2021, potentially beating Ikea which has been promising a New Zealand store for what seems like 1 million years. The Costco announcement said construction would start on the approx. 5,000sqm building as soon as consents, which have been applied for, are granted.

The old king of NZ big-box retail, The Warehouse has lost some of its influence over the New Zealand el-cheapo market in the last few years as it’s struggled to keep up with the growing number of online shoppers, and the arrival of Costco could either make the red shed tighten its bootstraps and re-join the fight, or – worst case scenario – kill it completely.