After the current mammoth effort, New Zealanders’ patience for more lockdowns will be wearing thin. But as long as we can get on top of three crucial factors, there won’t be a need for them, argues Pattrick Smellie for BusinessDesk.

Barring another Covid outbreak before Christmas, and if all goes to plan – a very big if – the latest lockdown can be New Zealand’s last nationwide sacrifice.

The key to this credible expectation stems from three main factors: one positive, one negative, and one missing in action for now.

First and positively: by early next year, every New Zealander who is both eligible and wants to be vaccinated will have had the opportunity to do so. While vaccination doesn’t fully protect against catching or transmitting the delta covid variant, it is effective at preventing serious illness and death and reduces the likelihood of transmission.

Second, and negatively, the delta variant means New Zealand’s elimination strategy is no longer viable. It worked well against less infectious strains of the virus. It is worth maintaining both to encourage and allow completion of a mass vaccination push.

But delta – and perhaps strains yet to emerge – has overtaken the discussion about whether or not we need to “learn to live with the virus”. We are effectively doing so already, with random cases of Covid infection showing up in recent days at Middlemore Hospital.

The only choice we have – as individuals and as a country – is on what terms that coexistence will occur.

The third, missing factor is therefore crucial to being able to live with the virus on acceptable terms: widespread surveillance testing.

This cannot be provided at scale or with sufficient compliance using only nasal pharyngeal testing – the old ‘”stick-up-the-nose” weekly swab test.

With delta’s capacity to spread so fast, the far more pervasive use of non-invasive, frequent saliva testing should be a no-brainer, as should a re-examination of the place that rapid antigen testing – for all its tendency to produce false positives – could have in containing future outbreaks. There are two other major issues to be tackled. The first is a moral dilemma created by the current inability to vaccinate children under the age of 12. They are less likely to get sick and die from Covid and with delta’s inevitable incursion, and elimination cannot practically be preserved for their sake anyway.

However, they have rights just like everyone else and cannot currently be vaccinated. This may be the government’s toughest issue.

The second is the fact that New Zealand does not have enough intensive care beds and nurses to handle a delta outbreak. Surely it must be time for ministers to reach over the health ministry, which did not prioritise this need, and tell district health boards that money is no object for investment in negative pressure rooms and intensive care unit (ICU) equipment. Priority and funding to upskill locals and attract trained ICU nurses to this country should be considered urgently.

The cost of both these measures is minuscule compared to the cost of another lockdown for a largely vaccinated country, where the fully vaccinated majority’s patience will be running very thin for more lockdowns.

Compliance with enforced isolation and job-killing, school-wrecking economic turmoil for weeks at a time is not just a health question. It is a political and social licence phenomenon.

While public opinion in New Zealand remains overwhelmingly supportive of the government’s handling of the pandemic to date, there is also a great weariness – felt most acutely in Auckland the largest population centre – with this prolonged, severe lockdown.

The only upside is that the current outbreak is driving up vaccination rates.

The government wants that to continue. That is why you won’t hear any explicit talk of how the next phase of the publicly trusted “health first” approach involves abandoning the elimination strategy some time early next year.

That is what is being planned, right now, in what one close observer astutely describes as an endless, stressful and imprecise process since March last year of “surviving and getting ahead of the curve without all the information”.

The sheer unknowability of the future course of the pandemic globally and in New Zealand makes it perhaps the most challenging peacetime policy challenge a New Zealand government has faced.

Because of that, it must also lean on the few things that are certain in making its decision. People waiting for their turn at the drive-through vaccination centre at The Trusts Arena, Auckland (Photo: RNZ/Nick Monro)

Trust in a time of uncertainty

One such certainty is that New Zealand can learn from other’s experiences.

We know that locking down late against delta means losing. That is the lesson from New South Wales.

We know that two somewhat similar countries to ours – Denmark and Singapore – have achieved high vaccination rates in populations that, like ours, have high levels of trust in their governments.

We know from Singapore that, within weeks of relaxing restrictions because of high vaccination rates, a delta outbreak has occurred, but that the city state’s ICU wards appear to be coping with a relatively small number of acute covid cases.

In Denmark, vaccination rates have led to a complete opening up in recent days. Our reopening timetable is running a couple of months behind both Denmark’s and Singapore’s. Watching how both countries deal with outbreaks will be instructive for New Zealand policymakers.

However, nationwide level four lockdowns are unlikely to remain the go-to solution, although localised lockdowns may still come and go.

There will be more masks, more scanning, more booster shots, and maybe a lot fewer fun places to dine and be entertained, but a new normal will start to emerge.

For now, however, the government will lean hard on its current high trust levels and seek very high vaccination rates as an offset to underinvestment in ICU capacity.

It will do that by example and persuasion rather than targets or mandates, reasoning that forcing the vaccine hesitant to get their jabs will drive many into the arms of the hard core, 5% or so of the population who are committed anti-vaxxers. 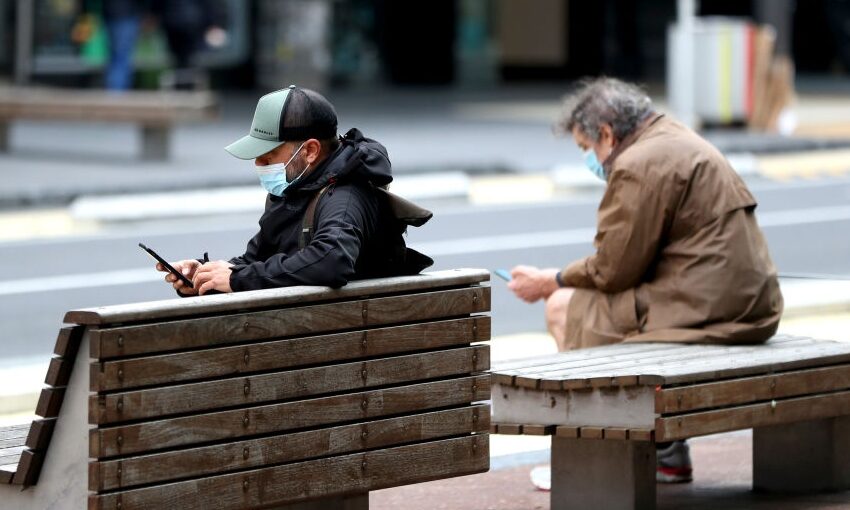 There will be more masks, more scanning, more booster shots, but a new normal will start to emerge (Photo: Getty Images)

In the process, however, the government must negotiate a change in the entrenched “zero Covid” mentality many New Zealanders not only believe in, but are rightly proud of to date.

If it did, it would risk both weakening resolve for the current lockdown and discouraging some who may hear the abandonment of elimination as defeat and choose not to be vaccinated accordingly. That would be a massive own goal.

However, let’s be plain about it. In the Beehive, elimination is no longer regarded as a long-term viable strategy.

So, ignore those who are saying otherwise, mostly by misinterpreting comments by the Covid response minister, Chris Hipkins, that seemed to suggest the “reconnecting NZ” strategy needed to be rewritten because of delta.

All Hipkins meant was that delta is changing how to think about the border.

Once there was talk of “green, amber, red” countries, with gradations of isolation and quarantine possible for arrivals from each based on levels of risk. Now, the whole world is now “amber”, with patches of red.

New Zealand is joining those ranks as we speak, not because we chose to, but because delta said so.

For those who were proud as a “team of five million” that this country experienced an 18-month reprieve that most of the rest of the world did not get, a new collective target might be this: to be the most vaccinated, and therefore safest, country in the world as this ever-shifting pandemic grinds on.