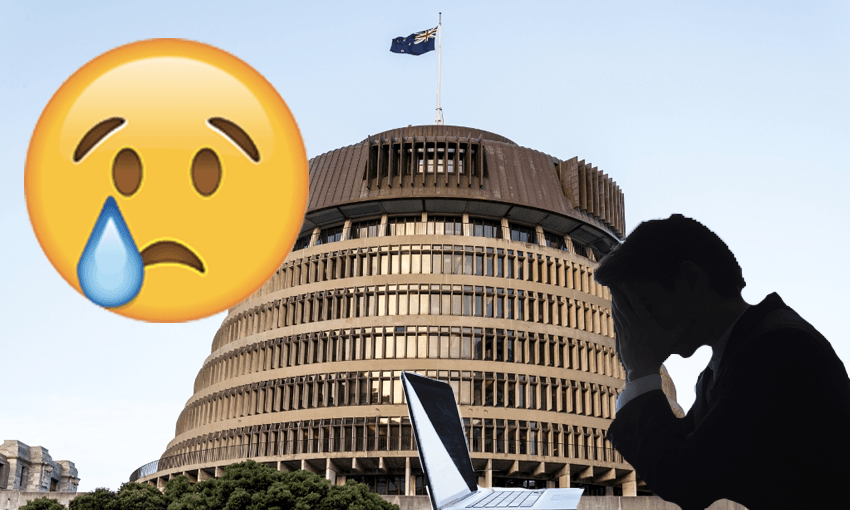 Why has business lost its confidence? And can we help?

GDP came out today, and it was fine – but that’s yesterday’s sales. The real question is, how does business feel about the future?

It sounds a bit like one of those earnest startup pitches. Gross domestic product (GDP) provides a snapshot of the performance of the economy. GDP is New Zealand’s official measure of economic growth. GDP grew 2.7% over the year ended March 2018. GDP.

Then exports are added to domestic consumption (the stuff we use), as they represent goods and services produced in New Zealand. And imports are subtracted, as they represent stuff that wasn’t made here. And that’s it, really. A bunch of different numbers come together in a glorious soup of statistics, which we then concentrate down to this; the New Zealand economy grew 0.5% in the March 2018 quarter.

Behind the headline number (which also comes in a yearly version, 2.7% for the year ended March 2018), we can see how smaller lumps of the economy have fared; service industries’ activity grew 0.6% in the quarter, “easing” (cough) from 1.1% in the previous quarter.

And then, looking even further into the stats, we find that overall growth in service industries was driven by a 1.0 percent increase in business services, and “information media and telecommunication services also contributed, up 2.3 percent this quarter, the largest increase in this industry since the June 2015 quarter”. Woo hoo, go information media! And yay! Agriculture activity was up 0.4%, following a 2.8% fall last quarter, on increased milk production. And so on. And so forth. There are also lots of data-heavy tables, if you’re so inclined.

Household spending, that’s you and me buying stuff, was a big zero. Gains were found in increased spending on services (which is good because we’re a service heavy economy) but the goods weren’t getting our money, with a fall in spending on new and used motor-vehicle purchases “likely the result of the reduced availability of cars after stink bugs were detected in car shipments,” the government statistician says. More worryingly, up until the March 2018 quarter, household spending had been growing every quarter since September 2012. Hmmm.

So the overall vibe today was meh. Things were broadly where they were expected to be, but the big Krakken in the economy right now is business sentiment, and that undefinable je ne sais quoi, or confidence (or the lack thereof). And it’s been like this for a while. Business has been feeling a bit weird about government ever since not a single soul from the Beehive turned up to its big party just after the election.

And everyone has been talking about it, and then oil and gas was canned, and Shane Jones started taking shots at Fonterra, and Winnie had his back, and there’s been a bunch of other things and in the background a string of surveys since, silently screaming that business is just not happy, you guys.

So do we need to worry about these surveys? Do we need to find out what’s going on with business, and ask them: are you OK? Industry group boss Kirk Hope of Business NZ told media today business perception is not currently matching reality. Things may look alright on the outside, but inside, business is being torn apart. And confidence, Hope says, dropped to an eight-year low in November when the new government took office, and is yet to recover.

Kiwibank senior economist Jeremy Couchman says business confidence surveys are valuable, but if you want to look to the future they are “far from infallible forward indicators of economic activity”. Like looking into a crystal ball, Couchman says, some survey questions can help gain a sense of firms’ future decisions on price setting, hiring and investing.

But headline business sentiment is often referred to by the press, and commentators, as an indication of the health of the economy, and he says firms’ overall confidence has been stuck in the doldrums since late last year.

So lets look at them. Couchman says there are two main business confidence surveys, ANZ’s monthly Business Outlook Survey and NZIER’s Quarterly Survey of Business Opinion (QSBO). According to ANZ, a net 27% of firms in May were pessimistic about the general economy over the coming year, down from a net 25% that were optimistic last June. Ruh roh. It has to be said, that Economic Development Minister David Parker dismissed ANZ’s most recent as “junk”.

And Couchman says questions related to views on the general economy provide firms with room for interpretation – compared, for instance, to asking a firm if they intend to add to headcount in the coming months. For example, NZIER asks firms: “Do you consider that the general business situation in New Zealand will improve, remain the same, or deteriorate over the next six months?” He says political views can creep into these answers.

“Part of the recent fall in confidence is likely to be due the 2017 change in government, as business confidence has shown a bias away from Labour-led governments in the past. This is not to say that headline business confidence should be ignored, just that political biases can skew things a bit. If firms are feeling a bit blue this can translate into decisions to delay say investing until firms feel the commercial environment is more conducive to green-lighting major business decisions.”

He says a better indicator of future activity measured in business sentiment surveys’ are readings of firms’ own trading activity, and these metrics turn out to be more closely correlated with – you guessed it – GDP growth. Now, firms own trading activity has also eased since last year’s election, but by a far lesser extent, Couchman says.

“The QSBO survey for the March quarter showed that a net 16% of firms expect to see an increase in domestic trading activity over the coming three months – just above the QSBO’s average reading. This suggests that far from falling off a cliff the economy is likely to grow around average over the middle of 2018.”

So yeah, it’s still meh. Finance Minister Grant Robertson painted the slowing growth as transition from an economy based on population growth and speculation in the housing market, to one where we’re more productive and sustainable. We’re big and standing on our own two feet. We’ll have to see how it pans out.

But what can we, average punter on the street do, to help our unconfident businesses? Just the usual folks, stay calm and buy (preferably made in New Zealand) stuff. Or book and use a service. We have lots.