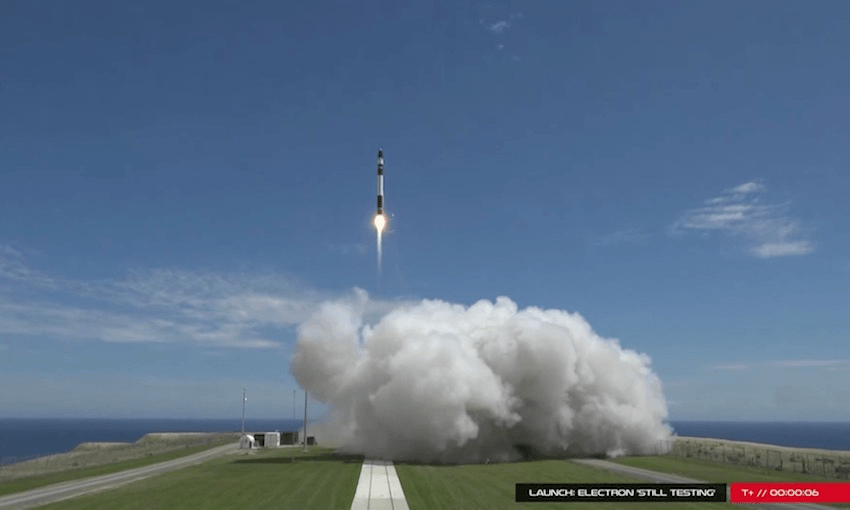 On Sunday, a rocket was launched into orbit off the Māhia Peninsula by Rocket Labs, an aerospace manufacturing company founded by New Zealander Peter Beck. Madeleine Chapman watched the full livestream and reports the highlights.

I love a space movie. Anything that involves people emotionally trying not to die in the incomprehensible expanse that is outer space, I am there and I am weeping. In all these movies, there’s an intense lift-off sequence filled with suspense and tension. Watching a rocket launch at the movies is a thrill. Sadly, watching a rocket launch in real time is incredibly boring. Here’s a breakdown of what actually happened outside of the ten exciting seconds you saw on the news.

We begin our broadcast with some undeniably New Zealand landscapes and a ballpoint pen of a rocket looking out of place – or should I say out ;) of ;) space ;) – on the coast. Rocket launches are supposed to be surrounded by dry American desert, not the hilly Windows ‘98 screensaver. A man begins commentating in an American accent and a semblance of balance is restored.

American man is back on the air and announcing an ad for Electron (the rocket) and Rocket Lab (the company that built it). They’re the best in the biz, according to this employee.

Silence. Sometimes the view changes to a much wider angle which is nice.

Now it’s time for the history of Rocket Lab and some classified ads. There’s a job opening in the propulsion manufacturing engineering division. The job site is Huntington Beach, California, right next door to Orange County of The O.C. fame. My cousin lives in Huntington Beach where the vibe is chill but housing is more expensive than in Auckland. Keep that in mind before applying to this position as advertised seven minutes before a rocket launch.

Speaking of inappropriate ad placements, the Spinoff is now hiring.

Five minutes of silence, presumably giving you time to check out the careers page on the Rocket Lab website.

The real men in charge are now on the wire and speaking in all sorts of different accents. American, New Zealand, a caricature of a German accent. It’s truly the UN of space expeditions.

Thank god there’s a countdown, just like in the movies.

One guy was still counting down to zero when another guy announced “ignition” and the rocket took off two seconds ahead of schedule. Seems like these routines should’ve been practised beforehand.

People are still talking but I can’t hear them because I’m now deaf. Sound levels are all over the place.

Some polite clapping can be heard as the rocket doesn’t implode. This suggests a lack of brown people in the control room.

Lack of brown people confirmed. Potentially a room full of 3D models of the same one man in various stages of adulthood.

The best part of the video was in the final second when these two sober men hesitated before hugging each other. Get Tom Hanks and Ed Harris on the phone, this needs to be a movie.