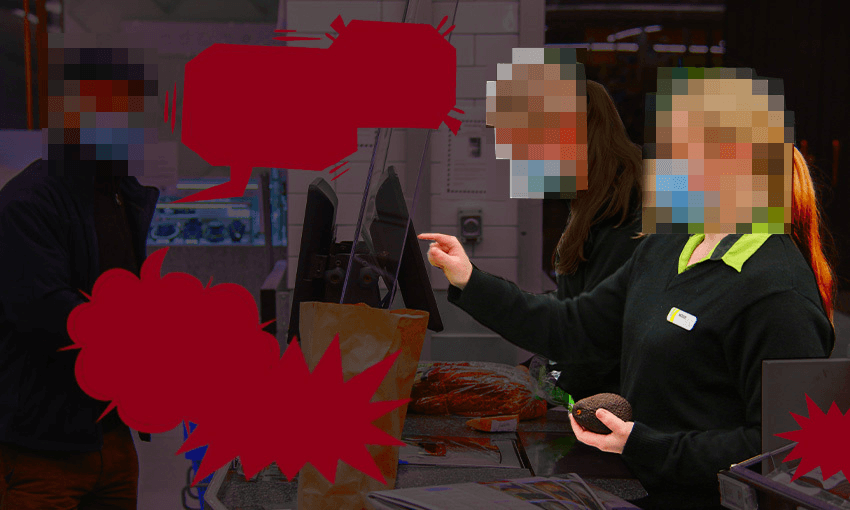 Supermarket staff on serving protesters: ‘It’s scary … I just don’t want to go in there’

A few days after the parliamentary protests began, Carrie* arrived at New World Thorndon to begin her work day. Once there, she was given the task of door duty, whereby staff stand at the front entrance and check customers adhere to the store’s Covid-19 policies. She’s young, employed part-time, is immunosuppressed and suffers from asthma. Getting Covid-19 would not be good for her. “I’m likely to be hospitalised if I get it,” she says.

Yet, with the supermarket just a five-minute walk from the Beehive, protesters gathered at parliament have quickly become regulars, using their nearest supermarket to stock up on supplies and alcohol. With omicron case numbers rising, working door duty puts Carrie in close proximity to unmasked, potentially unvaccinated people. “It’s nerve-racking,” she says. “I’m not the most anxious person [but] this definitely makes me anxious.”

Tension has been high at Thorndon New World since the protests began two weeks ago. Two staff members with customer-facing roles told The Spinoff protesters arrive at the supermarket to shop in groups of three or more, and can be loud and aggressive. Anger also comes from masked customers who want to know why unmasked protesters are being allowed to shop alongside them. Shoppers confront staff and each other, at checkouts and in the aisles, debating mask rules, vaccine statuses and exemptions.

Confusion over the rules hasn’t been cleared up by store management, those staff members claim. Both say communication has been lacking. For Carrie, it affects her ability to do her job. “I had no idea whether or not I was supposed to force people to wear masks, or force them to show me an exemption, because I’ve heard so many different things,” she says. “When I did ask someone for an exemption and they got angry at me, the workplace was like, ‘Yeah, you weren’t meant to ask them that, you’re not meant to press on about it.’”

Emma Wooster, Foodstuffs’ Corporate Affairs Manager, called it a “horrible and stressful situation”. In a statement, she said store’s management were doing “absolutely everything within their control” to manage recent escalations in abuse. “While the full-time security on the door at New World Thorndon are present at all times and doing all within their control, it’s still distressing for our team members and regular customers to witness, or be around this unacceptable behaviour.”

Wooster said denying protesters entry to the store was against Ministry of Health guidelines. “One of the biggest challenges is our teams, or external security staff, can ask customers if they’re able to wear a mask, but in line with MoH guidelines we have to accept claimed exemptions at face value without verification,” she said. “We absolutely accept there are some customers who’re legitimately exempt, and they need to shop safely too. ”

Despite the presence of security, Carrie says any staff member can be asked to have a turn on the door. She remembers a conversation with two co-workers, aged 16 and 17, who told her: “I don’t like being put on the door. It’s scary.” Without advice from management, Carrie says she’s developed her own techniques to de-escalate interactions with protesters angry at being asked to wear a mask. “I don’t give into it. I don’t feed into it. I calmly talk to them. I try not to let people know I’m against the protests because it’s not worth it. You don’t know when you give your opinion if they’re going to flip out on you.”

Sometimes, though, those situations get out of hand. When two protesters told her, “Take off your mask – I want to see your pretty smile,” she immediately moved to stand closer to co-workers. Speaking an hour before her next shift, Carrie is hesitant about returning to the supermarket, and has considered quitting. On her previous shift, she’d been “bombarded by a few nasty people” and felt drained afterwards. “I literally just wanted to cry when I got home,” she says. “This is the first shift that I’m dreading. It’s scary … I just don’t want to go in there.”

Craig* also used to look forward to going to work. “Now it’s just more of this crap. It’s just another day of people without masks coming in and me being yelled at by people with masks thinking that they shouldn’t be allowed to break the rules,” he says. “We are the ones that get the brunt of it … we are the ones that have to deal with people going batshit crazy at us.”

Like Carrie, he blames management for refusing to enforce the store’s mask policy. New World Thorndon’s hired guards, hired after the protest began, are toothless, he says. “Security is … asking people to wear a mask and sanitise, but that’s all they can do. If someone says, ‘No,’ they can ask to see an exemption. More often than not, people go, ‘No, don’t have one,’ and walk into the store. At that point, they can’t do anything to stop them. The majority of security I’ve spoken to don’t know why they’re there.”

That means staff are being blamed for the store’s policy. “The confrontation I had with a customer the other day was him basically arguing that it’s not right. I told him, ‘Sorry sir, there’s nothing I can do.’ He said, ‘Yes there is, there’s a mask mandate, kick them out.’ I said, ‘I can’t do that.’ He cut me off and said: ‘Yes there is. Do it.’ I’m getting blamed personally for not doing anything about it.”

New World Thorndon isn’t the only business struggling with fallout from the ongoing anti-mandate protest. Down the road, the Backbencher pub across from parliament has been forced to close, while the owner of another small business told RNZ turnover had dropped drastically since protesters arrived. Rahaul Arona, the owner of vape store Shosha, told Stuff he felt intimidated by protesters entering his store.“They were asking: ‘Why are you wearing a mask? Why did you get the vaccine?'”

At New World, more complaints seem to be coming from masked shoppers over the maskless protesters. “They’re the ones following the rules and they see other people not following the rules. They are understandably upset and they take it out on us,” Craig says. Dealing with that tension all day is exhausting. When he’s addressed his concerns with management, he’s been told to ask a manager for help when it happens. In the heat of an argument, there’s no time. “They want to yell at you there and then.”

Craig’s accepted that going into work as the protest continues to gather steam means he’s likely to be exposed to Covid-19. “I’m genuinely expecting I’ll probably get it any time soon,” he says. His coping method? “When I get home I have a shower and a very big drink.” He knows it isn’t healthy, but it’s his way to forget about the events of the day. “I don’t think of work or the people there or the stuff I have to deal with. It’s my solitude from potentially getting sick for two weeks or having my co-workers laid up in bed because some dickhead couldn’t put on a mask for 10 minutes while they’re in a supermarket.”

*Names have been changed and identifying details withheld to protect privacy.