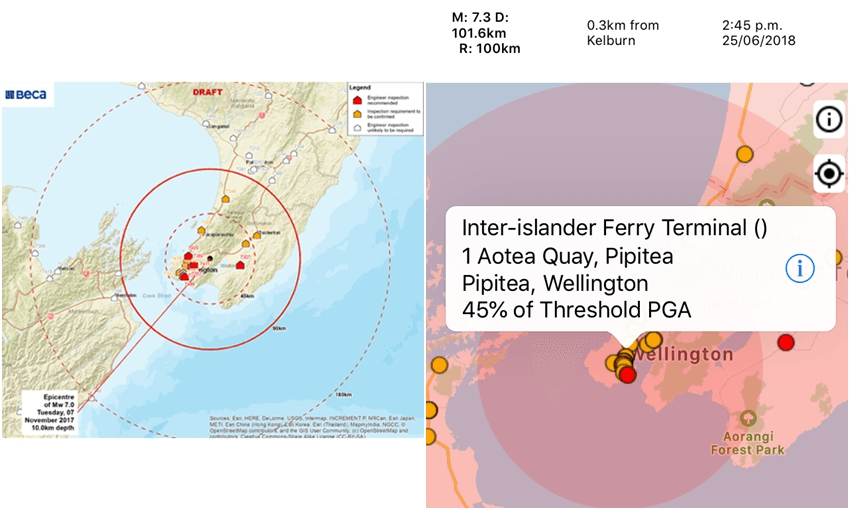 Praised for its ability to deal with “human anxiety in times of great distress”, the winners of the Most Innovative Hi-Tech Service award for 2018 is using technology and engineering to help businesses make informed decisions after an earthquake hits (and it only takes two minutes).

From Kaikoura to Canterbury, New Zealand has had its fair share of earthquake experiences over the past few years, and if research presented by two US scientists in November is anything to go by, the number of severe earthquakes is only set to get higher.

While we can’t stop Mother Nature from doing its thing, we can however devise solutions to safeguard against its effects using modern technology and engineering. In Canada, a new “quake-resistant concrete” has been developed that can make walls “bend”, while engineers in Japan have invented a way to “levitate” buildings off their foundations using a cushion of air. In the US, a team from the University of California have created an app that detects and records an earthquake’s tremors all while running in the background of your phone.

Closer to home, a team from the University of Canterbury has been conducting research into a new method for assessing earthquake damage in steel rebars (the steel reinforcing rods contained within concrete slabs) which it hopes will allow engineers to get faster, more reliable information.

Working towards that same goal is the Beacon System, one of the winning solutions at the Hi-Tech Awards last month. Developed by engineering firm Beca, the Beacon System is a real-time alert service that assesses the impacts of an earthquake on buildings and other infrastructure. The service is primarily aimed at businesses – particularly those with multiple assets, like a bank with branches across New Zealand – who can then use that information to make informed decisions around what to do next.

“We started off doing [some desktop-based analysis after events] by hand, which meant that on occasion, people were getting up at 2:00am to do engineering calculations for our client,” says Sam Fielden, commercial manager for new ventures at Beca. “We quickly got feedback that it was a very high-value service for them. We were giving them a much better understanding of how their assets were likely to have performed and they really appreciated that.”

Fielden says that the aim of the Beacon System is to speed things up in a post-earthquake situation where time and resources are scarce. After all, there are only a certain amount of engineers, and they can’t exactly be in two places at once, which is why the Beacon System is an easier way to prioritise tasks.

By running information about the earthquake (ie location, magnitude) and the asset (ie design, construction) through a proprietary algorithm developed by seismic engineers, the system is able to provide an assessment within just two minutes of the earthquake happening. It then notifies the client via the system’s mobile app, alerting them that a earthquake has occurred, and which assets (if any) it would recommend for inspection.

Currently used for assets in the retail, logistics, corporate, banking and public sectors, Fielden says the system currently has around eight clients. One of these clients is ANZ which, in the aftermath of the 2016 Kaikoura earthquake, used the Beacon System to make decisions about the majority of its buildings within the first three to four hours of the event.

Ultimately, the aim of the Beacon System isn’t just to help businesses open their doors again as quickly as possible, but to alleviate some of the stress and anxiety commonly associated with such a devastating event. It’s what handed the Beca the win for Most Innovative Hi-Tech service last month, with the judges praising the company’s “passion and commitment for dealing with human anxiety in times of great distress.”

“From talking to our clients, we know there’s a high degree of anxiety after an earthquake. They start thinking about their family, friends, staff, and customers. That anxiety has historically been allowed to run for a long period of time,” Fielden says.

“We recognised there was a lot of contemporary technology out there that could speed that process up. That was really the idea for the Beacon System – accelerating the time between the seismic event and the ability for the client to make confident decisions.”