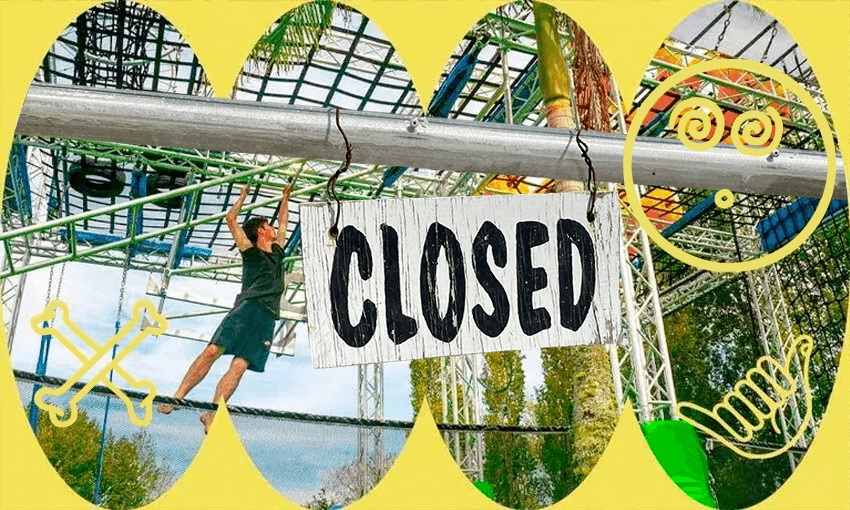 Why has New Zealand’s best theme park been closed all summer?

Thousands of kids should have spent their summer holidays training to become trapeze-swinging action heroes. What happened?

It should have been a summer like no other. After spending its first year in action suffering Covid-enforced closures, a brand new theme park north of Auckland was ready to swing into 2022 in style. Trapeze swings were set up. A ninja warrior course was imported from China. Climbing walls, Zorb balls, inflatable trampolines and a huge water slide were ready for punters eager to get hot and sweaty.

Matakana Country Park’s excellent Action Ninja World was waiting to entertain Aucklanders emerging from a five-month lockdown. Plans were in place to limit numbers to stick to social distancing rules. But there was still room for plenty of kids — and many adults — to swing, jump, run, bounce, climb, fall and climb again until their limbs begged for forgiveness.

Instead, the gates are locked, the “closed” sign is up, every available blow-up obstacle is deflated, and Zorb balls sit still. From afar, all that can be seen are frames and scaffolding. Venture closer and you’ll find red flamingo statues keeping watch over an empty park. The screams of happy, tired punters paying $25 to $35 a pop to become real life action heroes haven’t been heard here in months. No end to the park’s closure is in sight.

On December 1, I published 1000 words raving about Action Ninja World, Auckland’s newest and most exciting theme park. I praised its variety, its versatility, and the hold it had on my children after a brief visit turned into a five-hour exercise marathon. Those same kids have talked about it ever since, demanding to return. That’s normal, say organisers. Some kids return so often they’ve been asking for season passes.

In the rave review, I called it a “brilliant, addictive and occasionally scary experience” and concluded: “In a world awash with copycat playgrounds pared back to be as safe as possible, maybe that sense of danger is what makes Action Ninja World so good.”

The following day, less than 24 hours after that story was published, Action Ninja World was shuttered. In a message still visible on its website, “unforeseen circumstances” were blamed. It reads: “We are working hard behind the scenes with the Auckland Council to make this experience available as soon as we can.” Requests at the time for more information went unanswered.

The High Court ruling was released at 4pm on December 1, just hours after The Spinoff story was published. In it, Justice Mark Woolford quashed the park’s resource consent, originally granted by Auckland Council. His decision was based on a complaint from the owner of a neighbouring property, 85-year-old William Freeth, who argued the park was bigger and noisier than the one he’d been told about.

To uncover more detail, you need to dive into the fine print of Justice Woolford’s 18-page, 62-point decision. At question is a meeting between Freeth and Matakana Country Park owner Brendan Coghlan in November, 2020. There, Freeth claims he was given a site plan “without showing the extent of the 3,850 square metre area and its proximity to the boundary”.

Freeth thought Coghlan was setting up a park in the style of “a children’s playground at a primary school” with equipment connected by pathways. Based on that plan, he signed an approval of affected persons form, which was included in the park’s resource consent application. The council granted consent without public notification.

Once the park was open, Freeth objected. He claims he was “quite simply astounded” at the size and scale of it. His High Court complaint says he didn’t know entry fees would be charged, that the structures would be so big, and that so much noise would be generated from the park. Coghlan rejects this, saying they had a “long discussion” about the park’s noise. They also talked about “the sound of children having fun”.

The noise is a sticking point. Freeth doesn’t live on his neighbouring property, but his adult son does. Freeth complained that the noise from park visitors and air compressors impacted his son, who suffers from a “traumatic brain injury and … is badly affected by the constant noise from the adventure playground”.

In his decision, Justice Woolford ordered Auckland Council to restart the resource consent process. He blamed the council for granting consent without fully considering the impact on Freeth’s property. “In the circumstances, I am of the view that Council failed to properly consider whether or not Mr Freeth had consented to the application as lodged,” he wrote. “That is an error of law.”

A new resource consent application has been “accepted for processing and is currently under assessment,” says Auckland Council.

Is it a case of neighbours at war? Of one person halting the fun of thousands of kids because, as Coghlan claims, it does not “now suit him?” Without talking to them, it’s hard to know. Freeth couldn’t be contacted for comment, and  Coghlan turned down an interview request, saying he’d agree to an interview once the park was back in business.

His daughter, Action Ninja World’s marketing manager Annalise Coghlan, answered several questions via email. She told The Spinoff the park’s noisiest obstacles had been moved as far away as possible from the neighbouring property’s boundary. As well, noise cancelling fences had been installed to limit the sound coming from the park and affecting Freeth’s property, and his son. The park remains closed as “Auckland Council is having big delays with processing,” she wrote.

For the thousands of kids, and many adults, wanting to return to the park, it is a waiting game. In the meantime, fans post forlorn messages on Action Ninja World’s Facebook page. “Any updates to when you will be opening please?” said one recently. Sick of my kids pestering me for another visit, desperate for some news to tell them, I asked Annalise the same question. She replied: “Hopefully soon!”