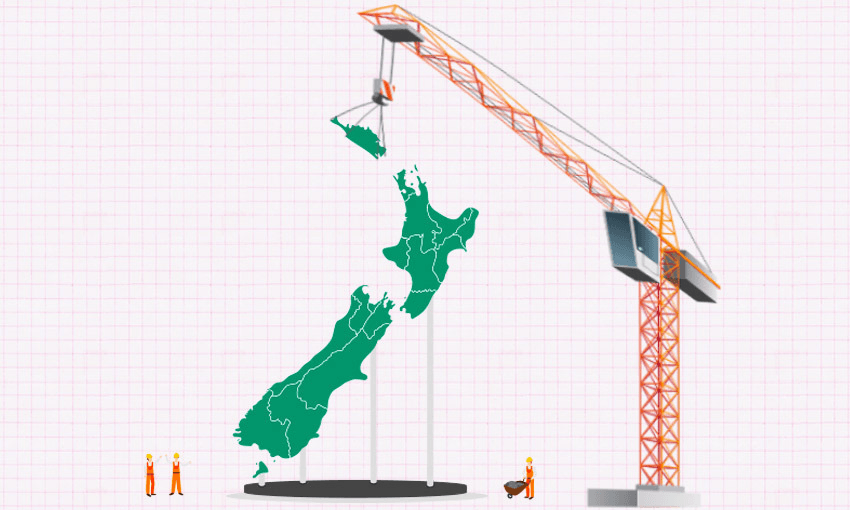 Looks like we’ll be staying home a while longer. Maybe we should do a reno?

The Skegg report and a delta outbreak revealed what we already knew: our borders are staying shut. Seeing as we’re all stuck here, we might as well sort the place out.

As the whole country sits locked down and nerve-jangled, it’s natural for our minds to wander to those heady days of early last week, when we were living that good normal life. Working, playing, seeing whānau, generally doing all the pre-pandemic stuff, except even contemplating leaving the country. It was pretty good! Then a fast-spreading local outbreak arrived, and we returned to our homes once again to wait it out.

Delta’s transmissibility had been a little abstracted prior to now – we saw it on the news and in bouncing infection curves without feeling it in our lives. But its local arrival and spread viscerally backs up the Skegg report of a couple of pre-outbreak weeks ago. It says that opening up will come haltingly, with countries that have similarly stringent public health measures, and will be contingent on high vaccination rates on both sides. Michael Baker, Siouxsie Wiles and the other prominent academic experts largely approve of this strategy. And, based on long-established polling trends, including our latest Stickybeak survey, the public does too.

Which is to say that while we got a reminder of how profound the pandemic remains last week, we all largely knew where this was going, and how long the road ahead remained. In some respects, more than surveys, the best evidence of our sense of the new reality is behavioural – what people are actually doing.

As the virus has ravaged large parts of the globe, New Zealand has seen a flood of money into what you might call personal infrastructure improvements. You see it in the achingly inflated housing market – with house prices up more than 30% over the past year. You also see it in the building boom and the corresponding dearth of basic timber supplies. You see it in record sales of new cars, shortages of recreational boats and surging e-bike sales numbers. Essentially, the parts of New Zealand that can afford to upgrade their home and transport are doing so.

This is what economists like to call rational behaviour: when faced with radically changed circumstances – in this case the inability to travel leading to more time at home – people are choosing to make their homes and systems better. What is somewhat less rational is that Aotearoa as a nation is still not making the same choices, despite facing essentially identical circumstances.

As households and as a nation, these factors are broadly true:

Where households can, they’re doing something about that. But as a country, we seem frozen in time, still largely operating under pre-pandemic strictures in a world and political economy that has been radically changed.

The Skegg report and its acceptance as essentially a commonsense response to our current circumstances by both government and the wider public is a reminder of just how fast sentiment has moved. It also shows how fast-moving this pandemic remains – just a few months ago case numbers seemed to be steeply declining in many areas, before the true speed and transmissibility of the delta variant became appallingly clear.

It’s also not inconceivable that a worse variant – faster spreading, more capable of breakthrough infections, more deadly – might emerge, adding another layer of doubt to our reopening plans. Australia this week abandoned the elimination strategy entirely, meaning our borders are closed with our largest neighbour for the foreseeable. Already the smart consensus seems to be that Covid-19 is endemic, here for the long haul. And the way out is made much trickier by the anti-vaxx movement, aided and abetted by powerful information transmission systems across social media, which remains aggressively pushing its agenda.

All of which is to say that as a nation, we will certainly be behind the walls of MIQ a while yet, and there is clear potential for that length of time to stretch out further. With all that in mind, maybe it’s time we punched out the back of our metaphorical villa. Pulled down the gib and insulated those imaginary rooms. Upgraded the inefficient pretend car. Just actually got around to fixing all the big problems. You know, seeing as we’re all here.

There remain formidable barriers. Building supplies are in extremely short supply. There is a finite amount of capacity in the major engineers and construction houses that can complete large scale infrastructure projects. And current MIQ capacity and lack of a population policy means our ability to bring in workers to do a big build is severely constrained.

Yet for all that, the factors in favour of a big build remain unprecedented – it hasn’t been as urgent or as saleable since Muldoon was in power at least (and the case is far stronger now than it was then, when we had a closed economy, no housing shortage, high borrowing costs and inflation). There is widespread public disquiet at chronic homelessness, overcrowding and our unwelcome topping of the OECD’s price-to-income ratios for housing. Our roads, particularly in our cities, are close to full. We’re travelling in the wrong direction on decarbonising our electricity. And the money to fix those problems has never been cheaper – government borrowing costs are far lower than inflation, and have been for some time.

To be clear, this isn’t an original thought. In fact, the Labour government could say that’s exactly what they’ve got planned. “The Big New Zealand Upgrade” has its own fancy logo and video, and a page on Labour’s site details its $12bn in spending priorities under areas like education, roads and healthcare. Only, it was announced just before Covid, and now seems extremely lacking in ambition, given that its $12bn is less than was spent on the wage subsidy in a matter of weeks. It has also been plagued by cost overruns, criticised for its emphasis on roads (some of which are now not happening) and just in general seems anchored in another fiscal reality.

It feels ripe for a 2.0. One which might include a massive and purpose-built MIQ, like that Australia has built in Darwin and the likes of the University of Otago’s Nick Wilson have long called for, which could be converted into quality, fit-for-purpose emergency housing on the other side (and thereby break our dependency on redeployed motels). A bigger spend could add a major upgrade to our health infrastructure, with a specific Māori health emphasis, to go with the already-announced systems change in nationalising of the DHBs and a Māori Health Authority.

The muddled drift of our transport progress surely needs resolving with something more ambitious than a harbour cycle bridge that already feels doomed. Our electricity prices are spiking to insane levels, and admirable energy startups are giving back customers. We’re burning more coal than we have in years, while state-controlled power companies decline to build huge consented wind farms. When you’re trying to electrify your car fleet but lack ambitious plans to power them, there’s a problem.

Then there’s the most pressing issue of all, the enormous, aching sore that is our housing crisis, now sailing into a second decade with no salve in sight. Is there a road back for Kiwibuild, a policy that might have spooked the government away from ambitious pronouncements, but remains as necessary in volume as when it was announced?

It’s been a long winter, the second in a row we’ve largely been inside our borders, and one we’re now spending the tail of in our homes. A significant chunk of our population has invested in upgrading their personal accommodation and infrastructure. Isn’t it time we as a country did the same? Because what is true for them is true for the nation as a whole: money is cheap. We’re stuck here. We might as well do something.