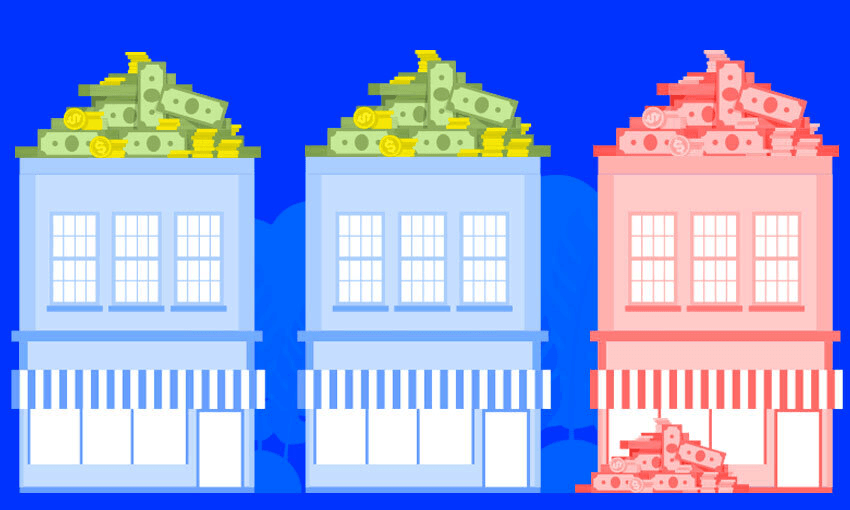 During last year’s lockdowns the government gave businesses billions of dollars they didn’t eventually need and deliberately boosted asset owners’ wealth by even more – all while the poor were left behind. Ready for version 2.0?

How on earth is this happening again? Last March’s scramble to stop the collapse of our economy meant all sorts of boondoggles and scandals got through the policy system, through cabinet, through the media, and into the bank accounts of the already rich. Fair enough. It was a chaotic and desperate time and any public servant or politician could be excused for policies that were dumb in retrospect, but worked in the moment.

And they did work as intended to stave off 30% unemployment. The government’s emergency economic measures gave over 900,000 businesses employing as many 1.76m people a $14b shot of cash into their current accounts to stop a cascading series of job losses. At one point, 62% of workers were in theory supported by the wage subsidies. That included 240,000 sole traders who got $2b of the $13.8b paid out in total as of the end of September 2020.

Almost immediately upon application, and with few questions asked, business owners got the cash. On one day in late March 2020 there were 70,000 applications to MSD. The money was paid out in an average of 3.5 days. On another single day that same month, $1.8 billion in cash was paid out in wage subsidies.

The scheme was the envy of the world. Panic was averted. Backs were patted and some business leaders even said some nice things about MSD’s speedy and easy money-shovelling. Phew. Crisis over.

Within weeks, the eftpos terminals were beeping away merrily again and the economy rebounded faster than just about anywhere else in the world. By mid 2021, business owners were actually short of staff and worried more about product shortages than a shortage of demand. Unemployment fell to 4.0%. Job done.

So why wasn’t the money that was needed in a hurry paid back in a hurry? Or at all? Some businesses were shamed into repaying their wage subsidies through mid-2020, including The Warehouse, Briscoes, Ryman Healthcare and Vector. Others hastily repaid the money slightly earlier when they realised their customers, staff, regulators and competitors could find out here the names of which large companies were paid and how much. There were some embarrassingly high-end names who had to scramble to give the money back, including blue-chip law firms such as Bell Gully, Simpson Grierson, MinterEllisonRuddWatts, Meredith Connell and Lane Neave.

Others took the money, recovered to make good profits, and then refused to repay all or, in some cases, any of the money, including Hallensteins Glassons, Fletcher Building, Harvey Norman, the Norman family’s James Pascoe Group (Pascoes the Jewellers, Stewart Dawsons, Goldmark, Whitcoulls and Farmers) and Fulton Hogan. Some refused to pay the money back on both sides of the Tasman, including Michael Hill Jewellers, Kathmandu and Harvey Norman. Then there were the luxury product and services businesses, often owned by rich-listers, that took the money and never repaid it, including The Wellington Club, The Northern Club, the Kauri Cliffs golf course and the Millbrook resort and golf course in Queenstown. The luxury lodges, wineries and golf courses owned by US hedge fund billionaire Julian Robertson claimed more than $1.2m in subsidies and didn’t return them, despite making hefty profits by the end of the year.

We’ll never know how many of the sole traders and small unlisted and family firms claimed the cash and never repaid the money out of the profit rebound. Many were small enough to argue they would be personally identified and therefore their privacy would be breached if they were included in the MSD database. Others were private or family firms that don’t have to report their results or dividends. Tens of thousands slipped through without notice, or accountability.

In the end, the total repaid by last month was just $730m. That’s despite IRD figures showing businesses were 19% more profitable overall in the first nine months of 2020 than the same period a year earlier. That’s despite Reserve Bank figures showing the deposit accounts of non-financial companies rose from $89.8b at the end of February 2020 to $106.0b at the end of February 2021.

Let that sink in. Businesses had $89b of cash in the bank for a rainy day. Instead, taxpayers at large gave them $14b, they made bigger profits, and had $17b extra in their accounts a year later.

Seems unfair? Many people agree. And not just those who work the closest with beneficiaries, renters, students and the working poor, who received around $50 a week extra in benefit increases and winter energy payments over the year — which was easily gobbled up by a 5% increase in rents and drops in part-time and odd-job income.

Some in the business community were stunned, and are now worried the government has learned nothing from the exercise. I spoke to Auckland University accounting professor Jilnaught Wong and Peter Vial, NZ head of Chartered Accountants Australia, about the resumption of the wage subsidy for this week’s When the Facts Change podcast.

After the recording, I also spoke to Christchurch philanthropist Grant Nelson, who made his millions in manufacturing business years ago, and now works with his wife in Christchurch through the Gama Foundation to help those less fortunate and point out policy mistakes to stop more people getting into poverty.

Nelson has launched a legal challenge to MSD’s apparent inability or reluctance to either launch prosecutions against those who kept the money illegitimately, or to at least send them a letter asking them to give the money. Various advisers, including in a detailed report from the auditor general’s office, recommended someone in the government simply ask those who received cash to prove with GST receipts that they needed the money, and if not, to repay the money. Neither has happened. There has also never been proper audits of how the money was sent, used, and not repaid.

“What has happened is a big contrast to the way the MSD deals with beneficiaries who have been overpaid,” Nelson said.

“In the last year for which figures are available, 65 beneficiaries were prosecuted. Most prosecutions were for relatively small amounts and the total cost of prosecuting was four times higher than the  total amounts awarded.

“In contrast to this, wage subsidy prosecutions will pay huge dividends and should have started long ago,” he said.

“Hopefully, public pressure and  the recent report by the auditor general will result in enough corrective action being taken to ensure that all those who wrongly obtained or retained a wage subsidy make repayments. These repayments should amount to thousands of millions of dollars and will benefit all citizens.”

The social licence issue is a real one, more than a year on from the lockdowns.

The government’s handing over a net $13b in cash and its approval of the Reserve Bank’s $62b of money printing to deliberately inflate asset values by $400b has dramatically widened inequality and has sent tens of thousands more children into poverty and homelessness.

Now it’s happening all over again, and without any apologies to beneficiaries, the young, the working poor and renters in general who lost out over the last year. They received comparatively little help from the government and had to watch their remaining hopes for rental security and the “Kiwi dream” of home ownership shattered under the weight of a 30% surge in house prices and a 5% rise in rents.

Facebook founder Mark Zuckerberg had a saying that he wanted to “move fast and break things” to build his social media network, and that it was better to ask forgiveness than permission.

The government hasn’t asked for forgiveness before doing it again, let alone permission.