When the wealthy businessman who’s attempting to fund a cup defence in Auckland – against Team NZ’s wishes – was copied into a controversial email last week, all hell broke loose. Writing for BusinessDesk, Pattrick Smellie lays out the background to the scrap, and what Grant Dalton could do next.

If Mark Dunphy has any sense, he will say nothing for the next few weeks about his attempts to race the 37th America’s Cup in Auckland.

The atom bomb dropped by Team New Zealand on Wednesday evening is a salutary reminder that its chief executive, Grant Dalton, doesn’t just take no prisoners, but revels in a spot of public dismemberment.

Such was the scorn heaped on the Dunphy camp when Dalton released a damaging email to the New York Yacht Club from long-time America’s Cup lawyer and Auckland sailing identity Hamish Ross – on which Dunphy was cc’d – that most media immediately wrote off any chance of a revival.

If ‘Dalts’ says communication on whether Auckland will host the regatta is at an end, then his excellent track record as a ruthless winner would suggest that that’s the end of that. Except for one thing: he doesn’t – yet – have anywhere else to go.

Remember, it’s only a little over a week since Team NZ had to postpone its previously unshakable deadline of September 17 for announcing an international host venue. The Irish government has gone cold on funding the 2024 regatta off the coast of Cork, the bid from the Spanish city of Valencia has collapsed, and undenied rumours about Jeddah, Saudi Arabia, suggest key Team NZ sailors and sponsors don’t want a bar of it. So, what are Dalton’s options? Firstly, he can try to revive one of the two European bids. The Irish objections sound very similar to NZ government sensitivities – committing a pile of money to an elitist sport on the basis of consultants’ reports that always seem to assume a pot of gold for the host country and nebulous benefits from visits by very wealthy potential investors.

Cork could yet bob up again.

An Irish bid would almost certainly attract a serious, big money audience from the Irish-American and sailing communities of the east coast of the United States. After all, the New York Yacht Club is the original home of the cup itself.

To the extent that Ireland is pitching itself as a high-tech investment venue, hosting The America’s Cup would have many of the same benefits as those touted for Auckland.

Valencia, as well, could come back. The three-headed consortium pushing the bid may have faltered, but if venue selection is still months away, a new bid might be stitched back together. Valencia has hosted the cup twice before, although as its mayor has pointed out, it’s still paying off the debts from 2007 and 2010.

There may yet be another venue we don’t know about.

One thing a betting person would wager is that Auckland remains last on Dalton’s list, no matter what he says.

For one thing, he has a vision for the cup as a moveable global event akin to Formula 1 or, more comparably, the SailGP series established by his America’s Cup nemesis, Russell Coutts – the turncoat skipper who won two Team NZ cup bids before becoming a gun for hire and winning it for Italian and American teams.

Also, Dalton doesn’t appear to have either the aptitude or the appetite to run another defence in Auckland if he has to answer to government departments – or any funder really – in the way that last year’s findings found that he should.

While Team NZ insists, correctly, that the inquiries into the team’s governance found no wrongdoing, it did find that having Dalton as chief executive of both the team and the company running the event was, charitably speaking, sub-optimal. The government, Auckland council entities and key private donors have all made it clear they will not support such poorly governed arrangements again.

For his part, Dalton has very little interest in being, as he sees it, hog-tied by pen-pushers’ processes when he’s got a multi-million tiger by the tail and a cup to win.

So, when Dunphy appeared with his local funding offer a fortnight after Team NZ had turned down the government’s $99 million cash and in-kind support package, Team NZ’s attitude was far from welcoming.

Firstly, Dunphy’s interest in helping fund a local defence was branded a “takeover”, which says more about Dalton’s proprietary approach to the cup than it does about Dunphy’s actions. If anyone has taken over the cup, it is Dalton, who appears to have wrested control of all significant decision-making away from the Royal NZ Yacht Squadron, which is technically its official holder.

With a “legacy payment” said to be as high as $3m on offer to support the cup going offshore, the squadron’s job appears to be little more than to ask “how high?” when Team NZ says “jump”.

The team also briefed journalists about the existence of a financial “wiring diagram”, which couldn’t possibly be shared, showing Dunphy planned nothing short of a typical merchant banker’s tax rort.

When the wiring diagram finally emerged, my reaction was to think: “my tax return’s more complicated than that”. It showed no more than a structure to achieve two things: create a governance structure that would channel money to Team NZ and the event, but would not give Dalton the chequebook. And potentially allow tax deductibility for private donations – something Team NZ had offered for nearly two decades before losing its tax donee status in April last year for reasons that remain unclear.

In short, if Team NZ now says Dunphy’s efforts were made in bad faith, then Team NZ’s initial rejections of those efforts were in equally bad faith. While Dalton says the race must go offshore because the money’s not here and that Covid-19 makes it inappropriate to seek government funding, the reality is that he has been seeking that outcome.

It is now a problem for Team NZ that Dunphy insists the money is here and the government offered a generous package of support.

This is particularly the case since the public investment to date in the team and the infrastructure on the Auckland waterfront was not fully realised last summer because of the pandemic. By 2024, with the world emerging from Covid, a repeat event in Auckland might see a better return on that investment.

The government and Auckland funding bodies are certainly open to an Auckland re-run. They are fully briefed on the events of the last few weeks and are simply declining to engage in the current unseemly scrap between giant egos involved in Auckland commerce and yachting. 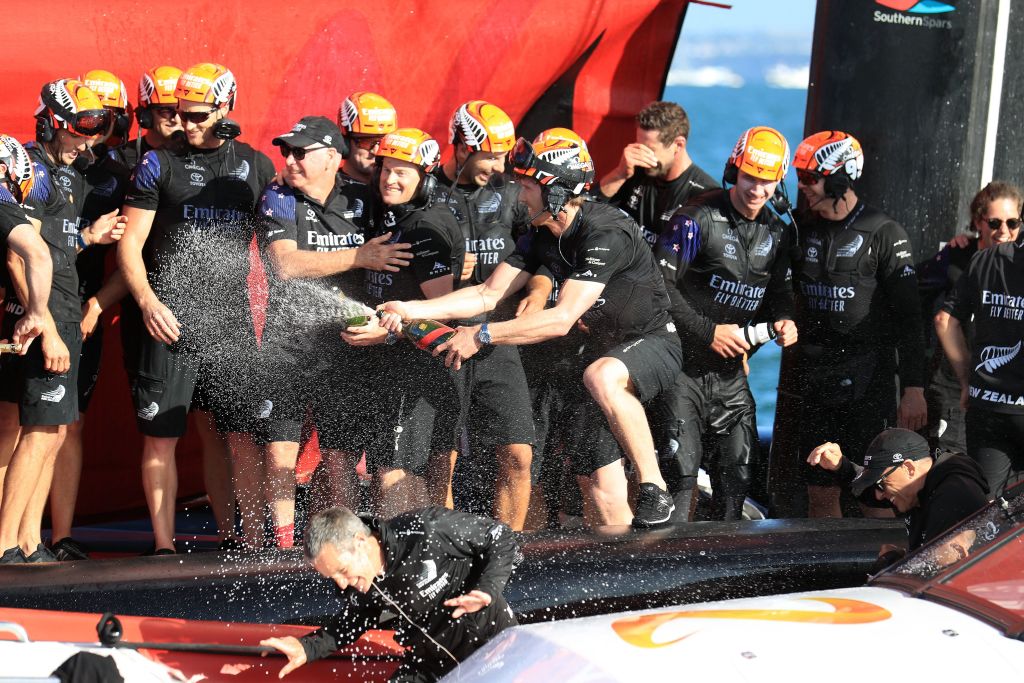 There is no question that missteps by Dunphy have played straight into Dalton’s hands.

Dunphy may be wealthy, successful and as intensely competitive as Dalton, but he has been religiously low-profile throughout a career in which he has amassed a large personal fortune as the founder of Greymouth Petroleum, one of the few remaining players left in NZ’s oil and gas sector.

He has, at times, been a possum in the headlights under media scrutiny and no match for Dalton’s PhD in media wrangling. It’s also clear from interviews in the last six weeks that Dunphy had his arm twisted to do the job by others, some of them with deep personal agendas when it comes to Dalton.

However, it is almost laughable to suggest, as Team NZ and some of the overheated international blogs that feast on cup gossip are doing, that his whole agenda is to get his hands on the secrets of Team NZ’s super-boat, Te Rehutai, and flog them to the competition.

Dunphy may have been a bit naïve. He may also be fairly ruthless in his commercial dealings. But there’s nothing to suggest that he or anyone near him is a traitor.

However, by creating that narrative, Dalton has bought himself time and space to scrabble for his missing venue.

Firstly, he could choose to go underground and firm up the monetary offers he says exist. Only when those are tied down should he re-emerge. If the money can’t be tied down, he can quietly retire from the fray.

And secondly, he might look for a successor. Dunphy’s inclusion in the NYYC email from Hamish Ross is an own-goal that will haunt him, whether or not Ross was right or wrong to include him in that communication. Interest in that level of forensic detail is nil. He has been damaged by that revelation.

But there are other wealthy, ambitious New Zealanders with the desire to attach their names to this big-name event that, love it or loathe it, has wormed its way into the NZ psyche.

Some of them may even know something of how to manage the mercurial aggression of leaders in the dinosaur mould of Grant Dalton. Some may also have learnt a few tricks about handling the media.

It will take that kind of combination to revive an Auckland bid for the cup. But until a credible international host venue turns up, it’s too soon to read last rites on the Auckland option.