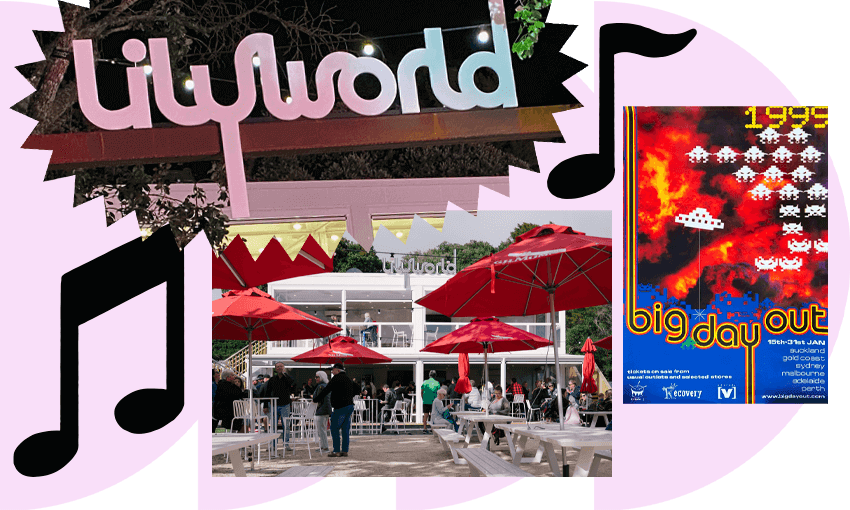 With Lilyworld, Mt Smart Stadium wants to bring back the Big Day Out vibes

“This is the VIP area,” says Scott Couch. He’s marched me past a pizza cabana and up some stairs, onto the second story of a repurposed America’s Cup bar being scorched by the afternoon sun. The view in front of us, of an expansive and empty concrete arena, isn’t great right now.

But Couch, head of commercial at Auckland Stadiums, is going to great lengths to explain his vision. “We’ll have decks on top of the toilets, and another deck on top of another bar,” he says, pointing and waving his arms around, trying to paint the picture.

He points to our left, the site of a beach volleyball court. “If you’ve got decks there, decks over there, and a new bar, then this becomes an amphitheatre.”

It’s a big, bold promise. We’re standing in a small pocket of Mt Smart, the Auckland stadium complex these days known primarily as the home of rugby league battlers the New Zealand Warriors (though thanks to Covid they haven’t actually played a game there since 2019). A few times a year the main stadium also accommodates music fans who venture out to Penrose to see A-list pop stars like Ed Sheeran, Taylor Swift and Adele perform.

Apart from that, there isn’t really any other reason for punters to make the trek out to Mt Smart Stadium. But, as all Couch’s hand gestures are trying to prove, that’s about to change.

A decade ago, when a circus tent called the Supertop covered the concrete forecourt in front of us, Mt Smart was known for something bigger, louder, and a little smellier.

For 15 years, this was the site of the New Zealand leg of famed Australian music festival Big Day Out. Every January the masses converged to get sunburnt and silly at a multi-stage event headlined by some of the world’s biggest rock and alternative acts. But declining ticket sales and some big name cancellations saw the 2012 event scaled back, and after it returned for one more go at Western Springs in 2014 the plug was pulled – seemingly for good.

Seared by nostalgia and desperate to experience live music again after two years sitting out multiple lockdowns on a couch, I’ve already covered the Big Day Out twice this year, pleading with promoters to bring it back, then ranking its top 25 performances. I have had too many conversations to count with others who feel the same way.

That’s how Couch tempted me out to Mt Smart. But this is no mere nostalgia trip. Couch is actually doing something about it. For three years, about the same amount of time he’s been in his job, Couch has been trying to open a new multi-purpose venue called Lilyworld, named after the cult Big Day Out stage starring a rotating line-up of wonderful weirdness.

On February 14 this year he finally launched Lilyworld with “phase one” of a progressive opening. Phase two? That’s what all the pointing and waving is about, but it depends on how phase one goes. “I don’t think I’ll get a phase three,” he laughs.

The new incarnation of Lilyworld will be more family-friendly than its predecessor, with a garden bar filled with white picnic tables and red umbrellas. Kids will be able to lounge on bean bags, play ping pong or enjoy a nine-hole mini-golf course while their parents drink coffee or beers, take in the big screen playing music videos, or, at night, sports games. A full menu will offer fish tacos, smoked brisket croquettes, a Big Mac pizza, and on Fridays, 50 cent chicken wings.

Whether you’re there for 7am coffees or 7pm drinks, you’re likely to find chill vibes and a friendly atmosphere. What you probably won’t find is MCs smoking up on stage or offering bogans $100 to shave off their mullets like the year Lilyworld’s hosts baited Metallica fans into wearing pink t-shirts.

But it’s exactly these kinds of moments that have made Lilyworld live large in punters’ memories. “It’s baked into the venue,” says Couch. Venue staff have always referred to this space by its Big Day Out name. “That’s how big the Big Day Out was for this venue; it’s always been called Lilyworld.”

Using the same name and even going so far as to borrow the same font from old Big Day Out posters — which Lilyworld needed permission to do — isn’t about living in the past, Couch insists. “We’re trying to celebrate a great event that used to be here, [but] we’re not trying to recreate that event. It’s its own space with its own purpose.”

Why is Mt Smart doing this now? “It’s dead space for 300-odd days of the year,” explains Couch. He wants to defy the stadium’s limitations, making it more than just a music and sport destination. It’s also about the bottom line: “The less dependent we are on ratepayer funding, the better for everyone,” he says.

It’s the same reason Eden Park offers overnight glamping, ziplining and golf activities when it’s not being used for rugby or cricket games.

At Mt Smart, a car racing circuit has been set up on the old Supertop site, complete with seating. The concrete concourse has already been used for several events, including an Audi showcase, and a car rally that had 800 classic cars and more than 3000 people on site. Couch talks about hosting corporate events and promoters, using Lilyworld to entertain VIP ticketholders.

Then there’s the music. Lilyworld officially opens with Lilypad, a free gig for 2,500 people on May 8, featuring performances by Bic Runga, The Veils and Nadia Reid. That, says promoter Reuben Bonner, is when the venue will really start living up to its name. “Mt Smart has such a legacy, but it’s obviously associated with massive shows,” he says. “Lilyworld carries some of that legacy … but it can host things on a much more intimate scale, so it brings Mt Smart to life in a whole new, much more intimate way.

There’s also room to grow, however: by pushing the stage across the old Supertop site, the venue can accommodate up to 10,000 people. The views from the VIP bar and decks would be unbeatable. Couch also walks me up to the area behind Lilyworld, where food trucks used to feed the Big Day Out masses. Today, grassed areas and wooden steps built specifically for the Big Day Out sit unused – they’ve been this way ever since the festival left in 2012. Couch’s vision is for festivals to set up multiple stages, like mini Big Day Outs, across this area.

He’s had promoters out to show it off and entice them to use it. Yes, that includes former Big Day Out promoter Campbell Smith. Smith has always said bringing back the Big Day Out isn’t up to him – it’s up to the festival’s owners, American concert promoters C3 Presents. “I haven’t had any conversations with anyone about doing it again,” he said in January.

Still, Couch is clearly a dreamer. He knows better than anyone that things evolve, times change, and the word “never” doesn’t always mean never. After all, Lilyworld’s already taken care of, and Couch is ready to lay out the welcome mat. He’s even had a new Supertop covering costed out to replace the old circus tent, just in case.

“We would love — we would love — the Big Day Out to come back,” says Couch. “I never got to go to one. I have massive FOMO about that.”