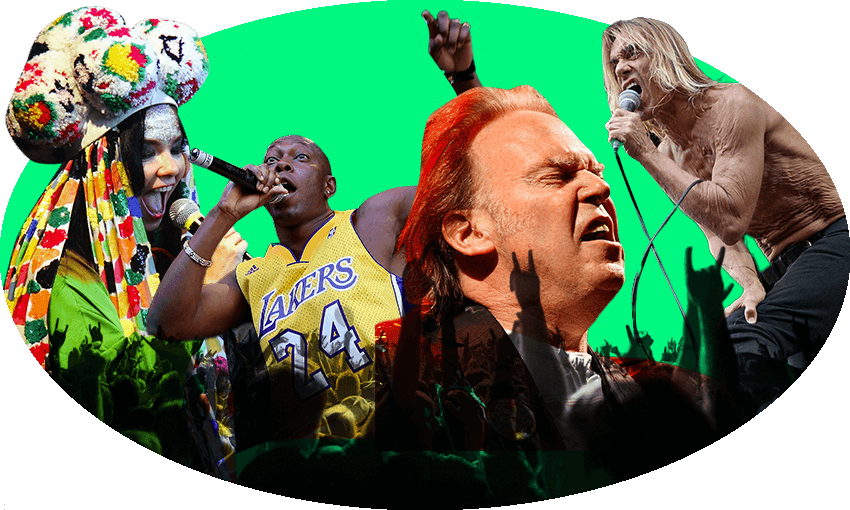 Nostalgia for Auckland’s alt-rock festival is at an all-time high. Eight years after its demise, we ask the Big Day Out’s New Zealand promoter if it could ever return.

“Hang on a second,” Campbell Smith says when I call him on a recent Tuesday afternoon. “I’ll send you something … call me back.” True to Smith’s word, a few moments later, my phone pings. It’s a photo album containing six quick snaps of his current surroundings: the music manager’s Morningside office, where a collection of new posters hang on the wall.

With colourful circus-themed artwork, and names like Pearl Jam, The Killers, the Chemical Brothers and System of a Down embedded in big bold fonts, they’re instantly recognisable from billboards past as posters from the Big Day Out, the long-running, now-defunct, much-missed Australasian music festival.

Smith found the posters in his shed recently and decided to get them cleaned up. They’re a constant reminder of his past promoting the New Zealand events, something he describes as “the most fun thing I’ve ever done”.

“If you came to our office you’d see the esteem in which the Big Day Out is held by us,” he says. The posters are a sign he’s finally recovered from the constant grind of running a huge annual music festival every January. Now, he only remembers the good times. “It certainly is a hugely important part of my career. I’m very fond of it,” he says.

For nine festivals over 10 years, Smith helmed the Auckland leg of the Big Day Out, which began in Sydney in 1992, expanded to include an Auckland leg at a sprawling Mount Smart Stadium site, including a circus tent, in 1994, and was held there for 18 festivals until 2014, when it moved to Western Springs for one final show.

For many, the Big Day Out became a rite of passage, an annual pilgrimage to see the biggest and best rock acts, electronic artists, rappers, DJs and homegrown bands perform on the same stages across a hot, humid, heaving Friday in mid-January.

Yet, ever since that 2014 festival the Big Day Out has been awol. It hasn’t happened since.

Eight years on, two of those spent in lockdown, with many major concerts and music festivals blighted by Covid-19 restrictions, nostalgia for the Big Day Out’s glory years is at an all-time high.

An ABC podcast detailed the show’s incredible highs – and a few terrible lows. A recent Audioculture feature gathered memories from performers and punters, as well as an incredible collection of photos. Every week, someone mentions their fave Big Day Out memories in the popular Facebook group, Lost Nightlife of Inner-City Auckland, sparking a flurry of like-minded comments.

Right now, the post-Christmas air in Auckland feels thick and muggy. Real Groovy is packed with punters. Music blasts from speakers in cars blatting down Queen Street with the windows down. As someone said to me at a work Christmas function: “What we need, right now, is another Big Day Out.”

They’re right. It feels like the city is ready for a mid-January post-New Year’s party. With the Big Day Out gone, there isn’t one to be had.

Smith agrees there are plenty of happy festival memories floating around. “What’s happened is, you’ve got a whole lot of people who are feeling nostalgic who went to the shows,” he says. “You’ve got a bunch from a younger generation who never got to go to one but know about it.

“I think now most people’s memories of it are really fond, and there are kids who never got to go.”

That’s not all: some of the younger acts Smith manages ask him about his days running the festival. “They know what the Big Day Out out is and have heard stories about what it was like and how good it was and never got to go,” he says. If it ever came back, they’d be super keen to play.

“While we intend to bring back the festival in future years, we can confirm there will not be a Big Day Out in 2015,” that statement said. “We love working on BDO and are excited about the future.”

Later that day, a 1 News film crew came to interview me, and I appeared on the 6pm news that night looking angry, distraught and disheveled. That’s exactly how I felt. Despite Auckland’s 2014 Big Day Out going off, a fractured festival market catering to niche audiences, as well as poor ticket sales across Australia, meant the dream was over.

But I still think about it all the time. That smell of sunscreen and sweat that hit your nostrils as you walked through the front gates; the overwhelming noise bleeding between stages; the camaraderie between screaming fans; those Fatima’s rolled pitas fueling moves between stages. And the music: Tool, Rage, Deftones, Bjork, M.I.A, the Chemical Brothers, Slipknot, Rammstein, Soundgarden, Hole, Nine Inch Nails. I experienced my first moshpit when the Prodigy performed in 1997, and have chased that feeling ever since.

Smith’s had life-changing moments at the Big Day Out too. “I remember standing at the back of Mount Smart when The Beastie Boys were finishing off,” he says. “There were 50,000 people in there and I remember thinking, ‘To have something to do with this, this is a highlight of my life, to have all these people in here having such a great time.’ I still remember that feeling of being there that day.”

Is that feeling over? Is the festival dead? Could the Big Day Out come back? When I ask him that question, Smith is quick to point out that he hasn’t had those conversations. Any discussion about the festival’s future is building “a make-believe world,” he says.

My brow furrows, but I press on. Smith says he’s moved on. He’s still promoting shows, including two legs of Auckland City Limits, a spinoff of Austin City Limits made with help by C3 Presents, the Big Day Out’s owners. He’s also working on a new festival, Outerfields, an all-New Zealand one-day event headlined by Benee, Ladyhawke and The Beths, in December, along with tours by Rufus du Sol and My Chemical Romance.

He’s clearly still in the game. So I ask Smith that if there were to be discussions, would he want to be involved? Yes, he admits. He’s not over it. Those posters in his office are a daily reminder that, just like the fans who went, the Big Day Out gave him some of the best times of his life too.

“You never say never,” he relents. “Anything can happen. Look at the last few years with Covid.”

Finally, Smith’s admitted he misses the Big Day Out as much as I do. “I would absolutely do it if we could.”