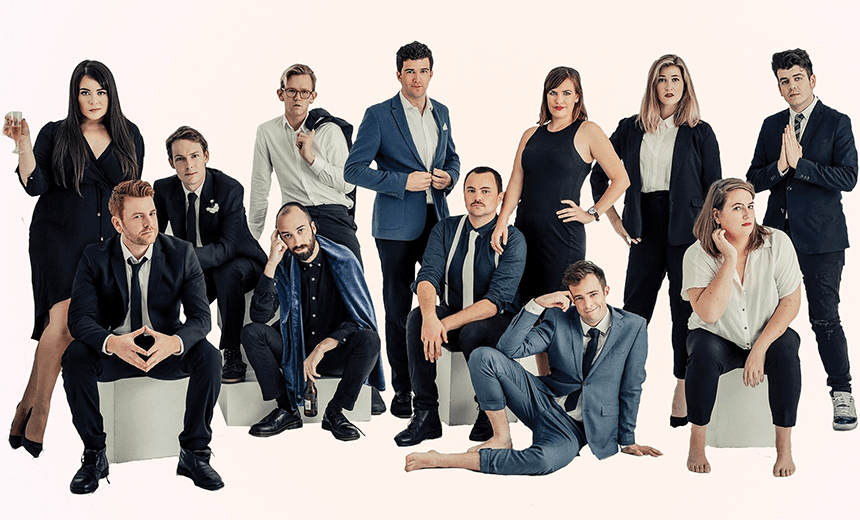 Andi Crown on how an archaeologist becomes a comedy festival photographer

Comedy co-editor Natasha Hoyland talks to Andi Crown about how she creates some of the most loved marketing images of the festival.

You may have flicked through the Comedy Festival programme and spotted an array of beautiful faces and stunning imagery. You may have even spotted some posters starting to pop up around town and online. A lot of these photos are by Andi Crown, who is becoming the go-to photographers for comedians and actors alike. When anyone needs new headshots or a poster image for their latest show, she’s often the first one they call up. I’ve always been curious about how some of these stunning images came to be. So I went to the lady herself.

How long have you been a photographer? Have you always photographed comedians or did you start with something else?

I learnt the basics of SLR photography and film development in my last two years of high school when dinosaurs roamed the earth, so I suppose it all really began for me way back then.

I was essentially working two full time jobs and the photography was going so well that I wanted to try and pursue being my own boss for a while. I worked as a contract archaeologist for seven years after I graduated with my masters, so I was looking for more of a creative challenge. I still like to get my dig on when I can though as the archaeology in Aotearoa and the Pacific is amazing.

It wasn’t until May of 2016 that I made the switch from full time archaeologist to full time photographer after building up my portfolio over a couple of years and teaching myself how to use Photoshop and Lightroom. I guess you could say that I’m predominantly a performing arts photographer with a particular interest in taking headshots, shooting rehearsals, live performance, and collaborating with artists to create publicity and marketing imagery – but really, anything to do with photographing people is my jam. Photographing comedians was kind of a logical progression as a great deal of the funniest people I’ve ever met come from acting backgrounds

You’re quite the photographer of choice for comedy festival imagery. How many comedians did you photograph this festival?

I think I worked with maybe eight or nine comedians this Comedy Fest? *scans Comedy Fest brochure* – ooh! actually it looks like 10 if you count the Snort guys. Result!

What’s the shoot environment typically like? Are people awkward? Is there constant laughter?

Given most people’s propensity to look forward to having their photo taken about as much as going to the dentist/gynaecologist, I try to make it as relaxed as possible. Let’s just say a lot of mindful breathing and eye-closing goes on during one of my sessions.

Where do you shoot most of the photos?

The large majority of my work is done from my house and using natural light so that tends to put people at ease pretty quickly. Back when I was first starting out I used to offer alcohol to my particularly anxious clients but once you’ve downed half a bottle of wine each, productivity tends to flatline and the incidence of pissy-eye increases so I don’t really do that anymore. I think I’ve found the best way to get people to enjoy the experience is to take the pressure off them as much as possible and just blather on incessantly about whatever. Things are often a bit awkward at first, but everyone’s always bringing their A-game by the end. I love working with people who have a strong concept for what they want to do but are prepared to riff on an idea during the session to come up with some gold.

Do you have a favourite shoot?

I love me some Donna Brookbanks, and the fact that she used her own cat Stevie in the poster shoot for her show Cat-Lady-in-Waiting cemented my love. Anyone who wants to try and be photographed with a live animal is alright with me.

What has been your favourite image that you’ve shot for a comedy festival show?

For sheer outrageous use of photoshop, I would have to say the image for Laura Daniel and Joseph Moore’s show Two Hearts: Auckland World Tour. I shot Laura and Joseph individually in my living room then compiled and edited the image myself. They came to me with some really strong reference ideas and then put their own spin on it – that one’s on my to see list.

I hear you’re doing an exhibition with the comedy festival at Q theatre – can you tell us about that?

Oh MYLANTA! This I am excited about! This year marks 25 years of the NZ International Comedy Festival – and to celebrate, I get to point my camera at lots of comedians who have pitched ideas for a portrait photo shoot. The final images will be blown up real big and hung on the walls of the Q Theatre foyer as an exhibition. Can’t wait to have a play!

Here are some more of Andi’s favourite photos of comedians that she’s taken:

You can view more of Andi’s work over on her site here.

You can book tickets to see the shows and comedians featured in this article here.