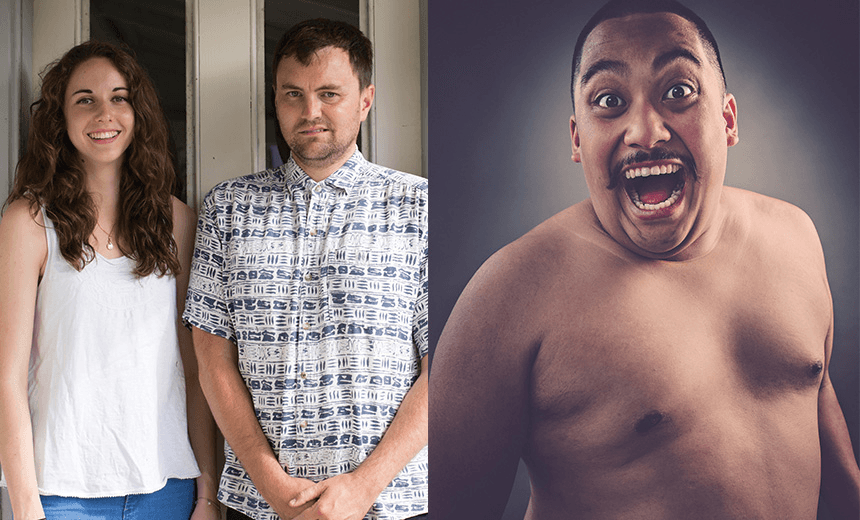 One of the most memorable moments in comedy in New Zealand over the past five years has been seeing David Correos win the Billy T Award. It could’ve easily gone to any one of the other nominees – Correos’ gross-out humour and balls-to-the-wall clowning was the definite dark horse of the five. And somehow he won. Upon winning, he promptly took off his clothes and went completely nuts onstage while hapless host Paul Ego looked on.

It felt like a changing of the guard in New Zealand, like a watershed moment. Comedy was no longer some dude standing on a stage talking about how much his wife/girlfriend/generic female relation was nagging him to do his chores. It was now whatever made the audience laugh.

Correos’ second hour is a rough one, undeniably. He admits it straight up, more than once. He goes off on entirely enjoyable and completely hilarious tangents. Seeing Correos do an hour of stand-up is like watching an expressionist deal with a colouring-in book; you know he can colour it in beautifully but what you really want to see is him attacking it with everything he’s got. The show is called ‘David Correos Going Full Correos’, and that he does.

My only experience with Correos’ work so far is seeing him in line-up shows, where he is a beautiful destabilizing element, an excellent counterweight to people who just stand on stage and tell jokes. It’s hard to describe it as anything other than gross-out humour, but the beauty of what Correos does, and what has made him a thing in the comedy community, is how far he pushes his own limits and pushes an audience’s limits. This is a guy who once drunk a litre of milk onstage and blew a condom out of his nose.

And he can colour within the lines. When he stands there and tells jokes, he’s as good as anyone. He’s insightful, he’s observational, and he has a beautiful understanding of how he’s landing with his audience and how to modulate to warm them up, or more usually, drive them further into an awkward appreciation.

But it’s when he’s scribbling all around, when he loses himself in his comedy, when he’s forcing the audience to engage with a bizarre Othello-esque monologue, that’s Correos at his best. It’s a rough hour, and whether that’s the nature of being his first show or a nature of the comedian himself, but it proves that he’s a worthy Billy T winner. Regardless of anything else, nobody else in this country, nobody else in the world, is capable of going full Correos.

You can book tickets to David Correos Is Going Full Correos here.

Bridget Davies and Tom Sainsbury: At The Drop Of A Mic

Lineup shows can be death for an audience. Sometimes you’re left with one comedian being starkly better than the others, or three people with three entirely different styles of comedy doing twenty minutes on the same bill. But when they work, they can a delightful sampler of what is the next great thing in comedy.

This lineup show, thankfully, is the latter.

Bridget Davies is the unknown quantity to me. Davies has a disarmingly warm presence and an easy confidence to her jokes about growing up in the country, and moving to the big city. It’s well-trodden material, but Davies’ take on it is refreshing. The entire 20 minutes is refreshing, actually. When you’re 11 shows deep into comedy fest, it’s genuinely great to see someone who seems stoked to do 20 minutes of solid comedy and make people laugh. It made me want to see an hour of Bridget Davies.

Thomas Sainsbury is the known quantity, at least for most of the audience, and definitely for me. Whether you know him from Snapchat, from TV, from Snort or from the literally dozens of plays he’s had produced at The Basement, Sainsbury and his style of surreal comedy is probably familiar to you.

His stand-up stretches him in a different way, while still staying in the New Zealand gothic territory that he occupies so well and so fruitfully as he spends his time riffing on his high school years. It showcases both Sainsbury’s talent for structure, as he seeds little jokes and callbacks all the way throughout, but the sheer amount of relatable material he’s able to glean from being a high schooler in Matamata is immense. I’ve already seen hours of Sainsbury material, but this made me want to just sit there for hours and listen to him talk about his life. There’s not a lot of stand-up comedians who can generate that, and to find one who does is very, very special.

Lineup shows can be hard on an audience, but this not only is genuinely delightful and easy, but it makes me keen to see whatever these two do next.

You can book tickets to Bridget Davies and Tom Sainsbury: At The Drop Of A Mic here