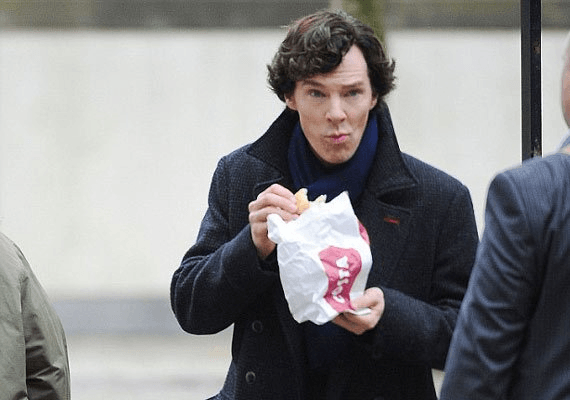 By Rose Matafeo
Guest writer
Made possible by

There’s a growing cult building around Sherlock star Benedict Cumberbatch, and Rose Matafeo has fallen under the actor’s spell. Here she attempts to decode his appeal.//

Late last year, I was flown down to Wellington to interview the cast of The World’s End at its New Zealand premiere. It was the fanciest media thing I’d been invited to in my time at TVNZU, and I was making the most of it.

My pass allowed me to walk down the red carpet, but I couldn’t imagine anything worse. I was wearing a bright pink jumper that I’d bought in the kids section of The Warehouse, and I didn’t have a convincing lie handy if asked ‘who’ I was wearing that night. I darted into a side entrance of the Embassy Theatre and followed the smell of free food.

In between inhaling as many miniature pies and white wines as possible at the pre-screening drinks, I tried my hardest to spot celebrities. I was mostly trying to figure out how tall they were compared to me, since I clock in at a towering 1.77m, which basically makes me Andre The Giant by comparison to most film stars.

As the crowd began to file into the theatre, I stood alone by the door, waiting for my friend Paul to find one last tiny pie. And then Benedict Cumberbatch walked past. I was surprised at how small his head was. We made brief but meaningful eye contact and he headed inside.

As we took our seats and started to unwrap the free Cornettos distributed at the door (fancy), Paul noticed that we were sitting about three metres away from Benedict. So, for the ensuing four minutes, I stared at Benedict Cumberbatch as he ate a Cornetto ice cream.

These dull memories of my brief brush with fame have come back to me recently because I’ve finally started watching Sherlock – one of those shows that people love to recommend, but with the warning that “the middle episodes of each season are weird but it’s still SUCH a great show”.

SIDENOTE: I really hate it when people recommend shows like that. It’s like saying, “Try this cake! It’s so delicious. I mean, there’s a piece of dog shit somewhere in there, but the last couple of bites are EXCELLENT. And everyone else here has eaten the cake and we want to be able to talk about the cake and not spoil it for you.”

But back to B-Cumbs. See, I never found him attractive. I couldn’t figure out what it was about this strange-looking man that had inspired hordes of shy and introverted people to willingly refer to themselves as ‘Cumberbitches’. And then I watched Sherlock. And then I watched Parade’s End. And then I watched every video of him on Youtube. And guys, I’m here to tell you – I get it. I finally get it.

Clearly I am no stranger to intense emotional fangirl involvement. I’ll be the first to admit that there was a period of my life where I would visit a ‘Fuck Yeah Christoph Waltz’ tumblr account a couple of times a day. And yes, I saved a few of the gifs to my desktop, but since when was that illegal?

What’s fascinating about Cumbers, and what sets him apart from others of his category (‘charming accent men’) is that his appeal is abstract and often hard to define. He’s not a conventional hottie, but then again, the best heartthrobs aren’t. My brother thinks his face sort of looks like the creepy goat man from Pan’s Labyrinth, and he isn’t entirely off the mark. Thick brows, steely blue eyes, striking cheekbones, cupid’s bow lips – if you’d never seen him before and tried to draw him based on this description alone, you’d end up with a pretty nightmarish sketch.

So apart from his looks, what do we have to work with here? He’s good at his job, is single according to my Google searches, has a great speaking voice (despite not being able to pronounce ‘penguins’), and he’ll punch someone if they talks shit about Keira Knightley. Yet all of these characteristics fail to articulate the pure essence of his attractiveness. But you know what, I think I’ve cracked it.

He just looks nice. He just looks real nice. He seems like the kind of guy who wouldn’t be a dick to you and would really adore you and respect the hell out of you and who might be real good at sex. Or something. I don’t know, I haven’t thought about it that much.

As Sherlock, he’s the exact opposite; in some ways he’s the ultimate PUA, the hard-to-get genius negging both men and women into adoring him (and I know this makes me sound like a very bad feminist, but I’m… kind of into it? I don’t know! I’m so confused!) Of course, I’m in no position to say whether or not this is actually true, but in most of his public life he seems charming and non-threatening – two very important characteristics if you want to achieve Tumblr swoon status.

I often think back to that night where we shared the same air at the Embassy Theatre and kick myself for not trying to talk to him or cut off a lock of his hair or whatever. But whenever I do, I remind the fangirl inside me of this: Benedict Cumberbatch is just a guy, eating a Cornetto, asking you to stop staring at him.

Watch Sherlock on Lightbox (with a 30 day free trial) here.