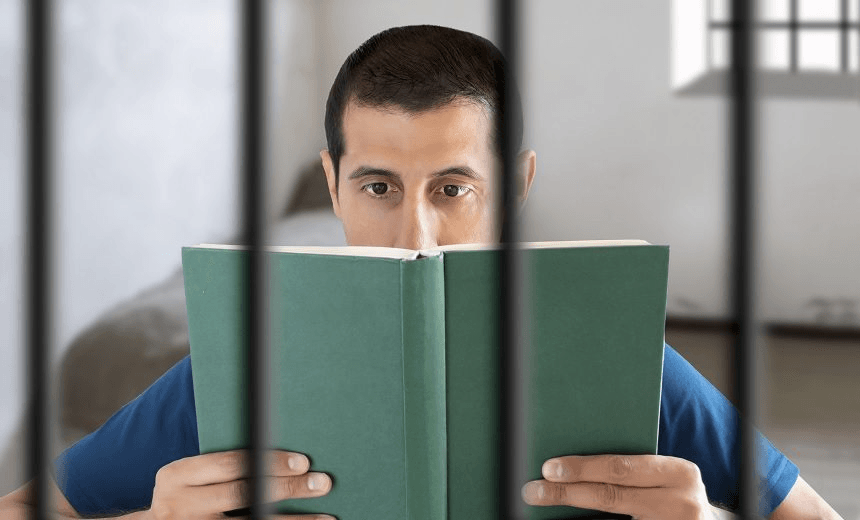 ‘You’re not a bad @#%! for a Pakeha’: A gang member reviews a Kiwi crime novel

By Craig Sisterson
Guest writer
Made possible by

The giant driver of the battered Bluebird didn’t need to screech the tyres or slam the door to announce his presence as he parked on Pukuatua Street in Rotorua. Unfolding himself from the front seat, his strides devoured the pavement between his car and McLeods Booksellers.

Moses in an oilskin vest and combat boots, the sea of customers parted before the gang member. It was at a book launch for author Ray Berard.

“I was outside chatting to people,” he said. “The others scattered, and I was thinking, ‘Is this guy going to bash me?’”

The giant smiled, bent down to press his nose against Berard’s, and said: “I don’t fucking read much, but I’m gonna read your book.” He bought a copy of Inside the Black Horse, got it signed, and then Berard gave the gang member his email address. He was curious to hear what this unexpected reader would think of his novel about the aftermath of an armed robbery that gate-crashes a drug deal.

“A few weeks later I got this great review in colourful language,” he said. A snippet: “Liked your book. You’re not a bad cunt for a Pakeha, but Kingi was too nice to be real.”

Berard’s character Kingi is the volatile, ruthless leader of the Assassins gang who has a fondness for violence and the meth his gang distributes. Too nice?

Inside the Black Horse is a snapshot of modern New Zealand, unmistakably Kiwi in flavour and tone, and packed with real-life contemporary issues. At WORD Christchurch Writers & Readers Festival this weekend, he’ll be among the finalists waiting to hear if they’ll receive a Ngaio Marsh Awards trophy. Uniquely, he’s in the running for both categories: Best First Novel and Best Crime Novel.

He was born in Canada. Ever since his tough childhood in an impoverished farming community in rural Quebec, Berard hungered to be an author. A few decades later, and half a world away, he’s finally broken through. The overwhelmingly positive response to Inside the Black Horse has been wonderful, he admits. But the reaction of that gang member matches any accolade he could receive. “Getting that guy to read and get something out of my book is the best reward I could ever have as an author,” he said. “And he was right about Kingi. The real Kingi was a terrible man. I only stole his physical embodiment for my story.”

Berard’s earlier attempts at writing didn’t have such positive outcomes. “I was born in the wrong place to be a writer,” he said. “Dairy farming was my father’s passion, but he lost his herd to disease when I was a baby. My parents worked outside jobs just to stay on the farm, and it was always a struggle. They raised pigs for fattening farms to pay bills, and my brother and I were farm hands by default. Even when I was six, life was school and work. My only stimulation was my father’s library. I read Dumas, Churchill, Shakespeare, anything to get my mind away from slopping hogs.”

Berard scribbled down stories, trying to copy the styles of authors he read. He devoured a history of the Civil War and refought every major battle in the backwoods alongside his dog. Then when he was 11 he won a writing competition at school with an emotional tale about his pet cow. “It was a big deal. I think I won $100 and it did two things, one very good and one bad. The good was my teachers took an interest in me and I started to understand that education was a way to another world. The bad was my neighbours, my peers, even my father ridiculed me. I got called ‘the educated fool, the faggot’.”

Exhorted by his father to “harden up”, bullied at school, an adolescent Berard snapped in an incident that would haunt him for years. One day on the school bus, the town bully pushed him too far, and he smashed the bully over the head with a steel lunch pail. “I really hurt him. Looking back, it was terrible what I did. My life was a lot better than his, his father was a terrible man. There were a lot of those people where I grew up. That experience left an apprehension about showing my writing to anyone. It would take years for me to get over.”

In his second undergrad year at Champlain College, Berard took a creative writing class. A professor praised one of his short stories, and invited Berard to join a writers group. But that merely set up another fall.

“I was so different to everyone in the group. Most were affluent academics and they were afraid of me, probably for good reason. I showed up dressed in an old army coat with a black eye from some bar fight. I had a habit of using my physical presence when I got nervous. I was blunt and angry and I never went back. It took many years for me to get over that.”

Moving to New Zealand in the mid 1990s finally allowed him to let go. “A new place, new possibilities, I’d learned how to live, how to respect others.”

Leaving behind his Canadian advertising career, Berard became involved in the New Zealand equestrian and racing industry, eventually rising to area manager for the TAB, first in Auckland and then the Waikato and Bay of Plenty. He kept a detailed diary for his work because he had to deal with lots of legal issues, including dozens of armed robberies.

“At first it was just notes so that if questions got raised later or when it went to court I had a record,” he said. “As my writing urge grew, the diary expanded. I started doing character studies. How events affected people’s lives – my staff, witnesses, the police, even the criminals. Violent crime completely alters lives. I remember one night this mother was bawling as the police took her son away. She knew he’d done this robbery and she called the police. That look on her face, all of her hopes gone as the police car drove off. The power of that was one thing I wanted my reader to feel, the humanity of those events.”

Berard has always been interested in how extreme stress reveals character, and is a big fan of the Coen brothers’ movies Blood Simple and Fargo. In 2008, he drew on his TAB experiences to outline a story based on the aftermath of a kid robbing a bar. In late 2009, he retired from the TAB for consulting work and to concentrate on writing his first novel, expanding the outline and drawing on real-life characters and incidents from this TAB diary.

Berard recalls how when he introduced Kingi the first time, he went into the gang leader’s history, along with the history of the Kaingaroa, the local economy, the gangs. It was about six pages long; he was encouraged to bring it down to three paragraphs. Many subsequent rewrites led to a fast-paced and engaging tale that still has plenty of layers when it comes to character, setting, and social issues.

Having grown up surrounded by poverty, and seen it up close again in New Zealand, Berard understands how inequality can affects people’s outcomes, the desperation it fosters, and how that can be overlooked by others. “I believe humans are the same everywhere. The only differences are cultural norms, economic opportunity, or the lack of it. If I hadn’t got off that farm, I might have been the guy with the gun walking through the door.”

Ray Berard will be reading from Inside the Black Horse at the free Murder in the Gallery event at 2pm in the Christchurch Art Gallery on  August 27 as part of the WORD Christchurch Writers & Readers Festival.

Inside the Black Horse (Mary Egan, $30) by Ray Berard is available from Unity Books.

From belts and zippers to short-sleeved dresses and wraparound tunics – this is how the nurses' workwear has changed in the last 30 years.
By Reweti Kohere
Staff writer
24th May, 2022