A bar planned for Auckland’s St Kevin’s Arcade is facing opposition from locals concerned about the character of the owner, former Married at First Sight contestant Chris Mansfield – who still faces outstanding domestic violence charges in the US.

The two lots inside St Kevin’s Arcade where Chris Mansfield plans to open his bar, Tomfoolery, were until recently occupied by vintage shops. Now, the windows are covered in brown paper with imagery and words advertising the proposed “drinkery and pantry”. The bar describes itself as a place “for those that like their drinks proper, and their yarns the opposite”.

Through his company, Front.Left Ltd, Mansfield has applied to the Auckland District Licensing Committee for an on-licence allowing Tomfoolery to serve alcohol between 8am and 3am, seven days a week. Mansfield has previously worked as brand ambassador for DB Breweries and account manager for Hancocks, a liquor wholesaler.

In 2019, Mansfield was fired as a contestant on the Three reality show Married at First Sight after it was revealed he had outstanding domestic violence charges against him in the United States. Production sources subsequently told Stuff Mansfield had been “aggressive and volatile” during shooting, and edited him out of the show before it went to air. 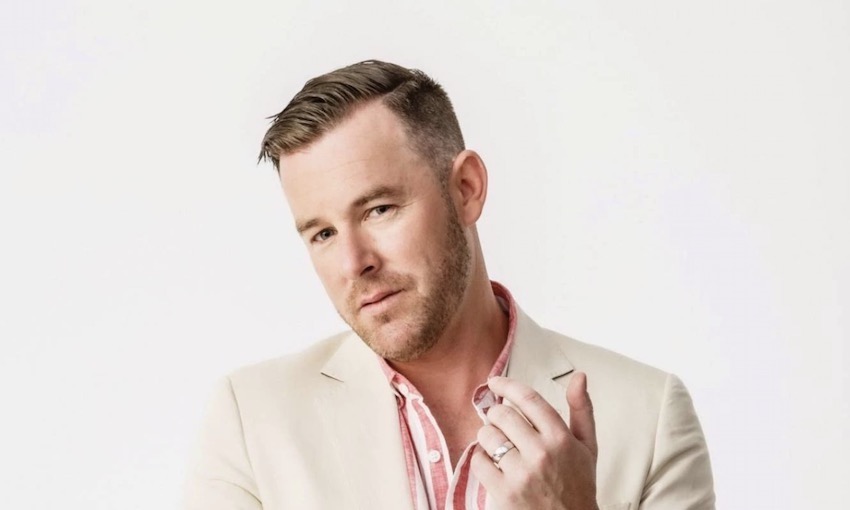 Chris Mansfield, who has applied to the Auckland District Licensing Committee for an on licence for Tomfoolery. (Image: Supplied)

Those wishing to object to an alcohol licence application have a 15-working-day window starting after the day the notice is first published online. Tomfoolery’s application was published on February 15, meaning this coming Monday is the final day for objections to be filed. Grounds include the suitability of the applicant, the opening hours of the bar, or the belief that the licence could lead to irresponsible alcohol consumption.

Auckland Council confirmed 31 objections had been lodged to date.  One of those objecting is Stella*, who works at a nearby retailer and plays in a band that regularly performs at Whammy Bar in St Kevin’s Arcade. They say they feel a responsibility to the community to object to Tomfoolery’s alcohol licence application.

“I spend a lot of time around St Kevin’s Arcade, I’ve been familiar with it my whole life,” says Stella. “I’m all for licensed spaces, I love bars, I live in bars. [But] Tomfoolery is very concerning”.

Stella says the biggest worry is Mansfield’s character, with his domestic violence charges and alleged behaviour during the filming of MAFS ringing “alarm bells”. They don’t have faith that Mansfield will protect customers’ wellbeing as a bar owner, having shown disregard for the safety of others in the past.

Stella is also worried about the density of alcohol licensing in the area. Not long ago, St Kevin’s Arcade was primarily a retail space. There was a travel agent, vintage shops, local designer boutiques and a couple of cafes. Whammy and The Wine Cellar, the bar and venue in the arcade’s lower level, were the only venues that served alcohol. Since former Shortland Street actor Paul Reid purchased the arcade in 2015, the number of licensed establishments in the arcade has more than doubled. According to the Tomfoolery website, the bar is set to open early this year (Photo: Jean Teng)

Tomfoolery is located in the middle of a space where gig-goers typically gather before, between and after gigs at Whammy, a music venue that tends to draw a young, non-mainstream crowd. Central Auckland has lost a number of live music venues over the past few years, and Whammy remains one of the last spaces for alternative music in the city. Now Stella worries the old St Kevin’s Arcade community is under threat. “It feels more like someone coming in and dominating. I don’t see any attempts to be integrated.”

Stella is also concerned about Tomfoolery’s design and layout: namely, its lack of bathrooms. They question whether the bar expects to rely on the toilet cubicles that sit at the back of the arcade, next to Bestie Cafe, and think there’s also a risk that drinkers may use Myers Park, which backs onto the arcade, instead of making the longer walk to the shared toilets upstairs.

Isobel* has lived and worked in the arcade over the years, and now lives across the road from it. They’ve also made an official objection to Tomfoolery’s alcohol licence application, but now worry about possible recriminations. Because objections are passed on to applicants, Isobel has contacted the council and asked for their signature to be removed unless they can ensure it remains anonymous.

Like Stella, Isobel’s objection rests largely on Mansfield’s character. While they don’t think he should be “written off for life”, and feel somewhat uncomfortable about the online pile-on he’s experienced, they think “it’s concerning that he hasn’t admitted fault or been repentant”.

Local antagonism towards Tomfoolery has been fed both by Mansfield’s lack of engagement with the community and his apparent lack of remorse for his previous behaviour, Isobel says. It’s also a sign of how protective people are of the arcade and the surrounding area – a feeling heightened by locals’ sense of powerlessness about the ongoing gentrification in the neighbourhood.

The issue is wider than just the owner’s past deeds, Isobel says. “If you’re a publican of a bar, you attract people like yourself. I don’t think I want someone who mistreats women, and refuses to be held up for it, opening something like this.”

* Names have been changed.