After literally thousands of requests, we’ve finally caved. We’ve decided to rank beans in an arbitrary yet unequivocally correct fashion.

A-mung the current chaos of the world we live in, there’s an inherent desire to create order. Some found that order in the first lockdown by cleaning their house or exercising routinely, but for others it’s bean a lot harder.

For me, ranking things has been the only source of order. I’ve ranked the leaves on my houseplants, ranked my housemates (cat, then boyfriend), ranked my limbs (shoutout to my right leg), and ranked the sun showers that have hit Auckland over the last week (1.24pm Wednesday wins).

As I reached my third-favourite limb up into the highest shelf of my pantry recently, fumbling for a can of whatever beans we had accumulated, I realised I was hoping for butter beans. What I got was kidney beans, and while also fine for the meal I was creating, I was hit with a wave of disappointment. This ignited a passion in me, and now, for the first time ever, and no doubt to the delight of millions, I’ve come up with an OFFICIAL ranking.

For a bean that sounds like a glamorous Italian opera singer, I’m surprised I’ve never heard of it. It has a wonderful pink speckled pattern and would make a good bead. The problem is bead is not bean. Last place.

These two are friends, and they hate being called by their physical attributes. It’s like when people call me Hot Alice. So annoying!

I thought this was the same as a common green bean, but after a quick search realised they’re slightly different, in that French green beans are skinnier and longer and cost more. Like baguette is to bread.

I love tomatoes as much as the next person but if you’re not just buying the cherry toms that are on sale, you’re losing, son. I expected these tomatoes to give me a toothache via being so sweet but they didn’t and I’m taking them to the Advertising Standards Authority.

They beat the lying cherry tomatoes, but only just, because I’m a vegan and most jelly beans have gelatine and/or shellac. Go for it if you’re into that, but this is MY ranking.

An absolute STAPLE in the nachos of my childhood, I can’t give kidney beans too low a score. I also can’t give them a high score via being floury and otherwise flavourless.

Easily the best-named bean, conjures images of a long-limbed lady going for a jog. Delicious cooked with butter, but so is everything. What lets these beans down is the slight fuzziness of the outer skin, which grips the tongue like the soft side of velcro.

Unfortunately for cannellini, it has a hotter cousin, the butter bean. If butter beans didn’t exist, this would have a much higher placing, but they do.

The kind of beans that fancy cafes use in their “house made smoky beans on sourdough”, which is a great breakfast option. Though I know nothing about horses or cars I respect that this bean lent its name to a type of both.

I racked my brain for thoughts about Sean Bean, but I have nothing. He was the subject of an early meme, his name should really be pronounced Seen Been or Shaun Baun, and I like the Lord of the Rings. Nothing more to say.

Mr Bean was apparently revolutionary television, but I have to be honest: I missed the boat on this one. Rowan Atkinson is cool though – when I was about 10 I thought Johnny English was the funniest shit ever.

The one in the orange can with the lady on it is the best refried bean on the NZ market. It’s great in a taco or a burrito, but it’s often an unsettling shade of grey, which bumps it a few places down. 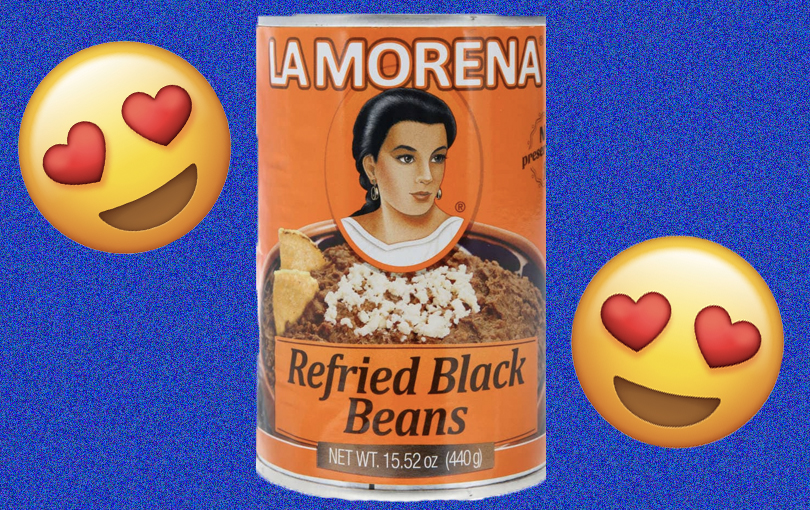 La Morena, the key to my heart (Image: Alice Webb-Liddall)

They’re cute kidney beans. A black bean sauce over sauteed Asian greens? Get OUT it’s so yum. Probably the most versatile canned bean, and for that it makes the top 10.

I’ve had the phrase “Butter bean, badaboom” written in my Twitter drafts for two years. Do you know what that means? I don’t.

As a kid I had boiled green beans about twice a week and I’ve never been bored with them. A classic, no-frills bean, but if you want to give it some frills cut it diagonally like they do with the frozen version – now that is class.

Eating these as I type and considering yeeting the edamame into first place, but I’ll hold myself back. Just try to tell me that any other bean would be perfect with only a sprinkling of salt. Impossible.

Chocolate, sure. The bean itself, pre-sugar? I’ve definitely tried to eat chocolate cake batter before mum put in the sugar and hoo boy that’s bitter.

Better than spaghetti. There, I said it.

I’ve never touched an actual vanilla bean, but I have seen one on a cooking show and prayed that the day would come where I too could run a sharp knife over the delicate brown pods to extract the seeds. I’m crying.

Look me in the eyes and tell me you’ve never dreamed about leaping into a room where the floor is made of bean bags. I’ve never been in a bean bag and not fallen asleep. As far as chairs go, they’re EASILY the top chair with “bean” in the name.

This bean makes up about 40%* of my diet in all its various forms. Without it I would be weak. With it I am still weak, but less so.

*edit: 50% of my diet, now I’ve discovered that edamame and soybeans are the same thing – all the more reason it should feature in the top 10 twice)

In the most predictable turn of the century: a journalist likes coffee. I’ve only had two cups today but I made the first one so strong accidentally that my left eyebrow has been twitching for an hour.