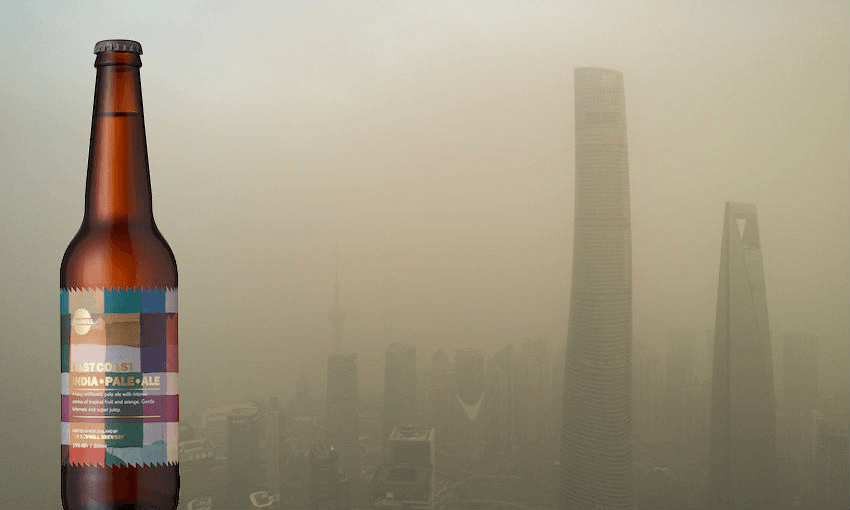 Hazy in love: Is the West Coast IPA about to be dethroned?

A new release from Sawmill has Alice praising the haze, and Henry plans his Christmas around an excellent-value, full-flavoured pinot.

Hazy IPAs are so hot right now. Well, to be frank with you, they’ve been pretty hot for a while, but the trend is showing no signs of abating.

I, for one, am pleased about this. Because like pizza and rosé (that’s the second week in a row I’ve got that reference in, which I’m pretty sure means it’s going to go viral any minute now), even the bad ones are still pretty good.

This here hazy IPA, however, is not a bad one. It’s a bloody good one. So good, in fact, that I can’t believe I hadn’t had it before now.

In simple terms, hazy IPAs are thus called because they’re unfiltered, giving them a hazy appearance as opposed to a clear one (there are all sorts of more complex reasons for this haziness, but let’s all agree we don’t need to go into them right now). The level of haze varies from beer to beer, and some are downright murky, but this Sawmill number is definitely on the lighter side of haze. More Urewera mist than London pea-souper, if you will.

Hazy IPAs were popularised in the area of the north-eastern United States known as New England — you know, where the people seem less brashly American than the rest of the country, and it’s all old buildings and autumn foliage and whatnot — hence, are often known as New England IPAs, or NEIPAs. Personally, I reckon that’s a clunky acronym that means sweet FA to us here in Aotearoa, so I much prefer when they’re labelled hazy IPAs or East Coast IPAs, as ol’ mate Sawmill has done here.

No, not Whale Rider/rugged coastal landscapes/Clarke Gayford’s hometown East Coast, we’re still in America here. But as the West Coast IPA (hailing, as it does, from the California-Oregon-Washington sort of area) has been adopted wholeheartedly by Kiwi brewers, our brains should be able to cope with the idea of an East Coast IPA as something same-same but different (essentially it’s like hip-hop in the 90s, but with fewer drive-by shootings).

Anyway. Sawmill’s East Coast IPA is the bottled version of the beer formerly known as Juicebox, which was initially a keg-only release. Dunno why they’ve dropped the Juicebox name – perhaps, as I sagely noted here, because so many other bloody beers have ‘juice’ in their names?

Either way, it’s now simple and to the point, which I like in a beer. And that’s not all I like about it. East Coast IPAs are supposed to be packed with juicy, tropical-fruity flavours, with a gentle bitterness rather than the knock-your-socks-off version of their West Coast brethren, and this one absolutely nails that on the head. It screams FLAVOUR and whispers bitterness, whereas some West Coast-style IPAs seem to do it the other way round. In short, it’s a helluva good beer.

It also just squeaks into my arbitrary weeknight quaffing rule* of being sub-6%, so has won a hard-earned place in my regular beer rotation. Welcome, hazy little friend.

Verdict: ‘Scuse me while I kiss the sky.

Last night, after sharing half a bottle or so of this Rapaura Springs Reserve Marlborough Pinot Noir, I sat down and watched an episode of Netflix’s new cooking competition show The Final Table. In this particular episode, the contestants had to make a Thanksgiving dinner for a mid-00s comedian (Dax Shepard), a son of Tom Hanks (Colin Hanks) and the NYT food editor (Sam Sifton), and the single New Zealand competitor (Monique Fiso) landed in the bottom three by fucking up the brioche stuffing (OK, it was more the fault of Monique’s partner, but Monique, whose on-screen persona flips between stoic and concerned, blamed herself for letting it stay on the plate in its imperfection).

While watching the judges rip through eight or so Thanksgiving dinners, I finished the last few millilitres of wine left in my glass and mourned the absence of turkey in New Zealand Christmas culture because here, in the dregs of my glass, was its ideal accompaniment. Dark and full-flavoured – dark cherry, dark plum, dark berry (OK, and some red berry too) – this steal of a pinot noir could stand up to most meats, but turkey is what I’d like to eat with it the most on Christmas Day (you can eat lamb any time of year). It’s a cranberry sauce of a wine – tart, a little sweet, with a subtle oakiness (OK, cranberry sauce doesn’t tend to be aged in oak, but you know what I mean).

So, why not try turkey and Rapaura Springs pinot noir for Christmas? Sure, turkey’s easy to dry it out, but lamb’s often over-done and dry as well, yet it avoids a reputation as a disgustingly dry meat. Plus, on The Final Table, one pair smothered their turkey in mayonnaise before cooking it to seal in the juiciness and it looked effing delicious. And they won!