Every Friday and Saturday, a line forms outside a decidedly humble-looking bakery in a suburb on Auckland’s North Shore. Charlotte Muru-Lanning pays a visit to find out why people are so committed to queuing.

When I arrive at 9.33am, Young’s Bakery has been open for just three minutes, but there’s already a queue stretching down the street.

“What are you all lining up for?” asks a woman in a fleece vest walking by.

“‘Cakes and pastries,” a man standing in line responds.

“They must be good!”

She’s not the only one intrigued by the ever-growing line stretched down Birkenhead’s Mokoia Road on Auckland’s North Shore. Groups passing by take photos and curious drivers slow down with their heads craned out the window, trying to figure out what’s going on. 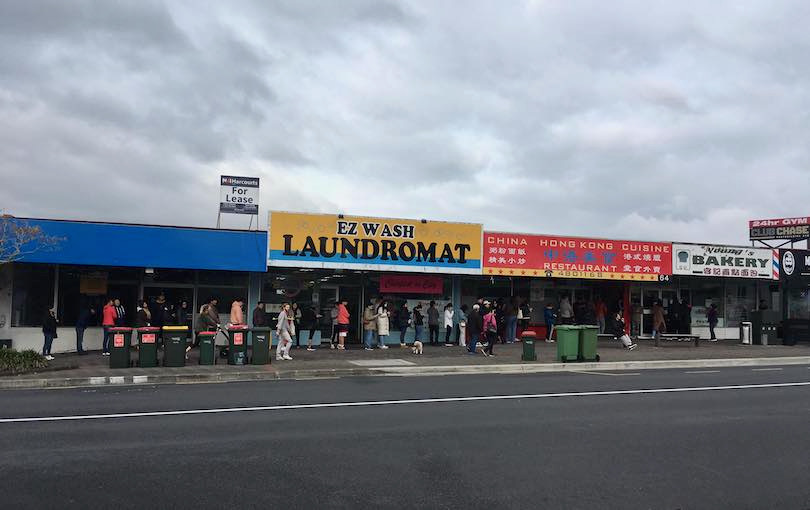 The queue outside Young’s Bakery one day in June (Photo: Hayden Donnell)

But this line is here for more than just delicious cakes and pastries. This coming Saturday, Young’s Bakery, which serves up traditional Cantonese-style baking, as well as popular iced cakes, will shut its doors for the last time. Its two owners have decided it’s time to retire.

Andy and Hilia opened the shop 24 years ago, in 1998. The couple didn’t want to be interviewed, but their daughter tells me they’re originally from Hong Kong and Andy began baking when he was 16. Young’s has become a family-run business, with the couple’s two daughters often helping out in the busy shop, which for the last month has shortened its opening hours to just two days a week, Friday and Saturday.

Near the back of the line on the Friday morning I visit is Bing. She’s been coming to the bakery often, but discovered it only recently. Today, she and a friend made the trip over the harbour bridge from their homes in South Auckland. Bing says she wishes she’d known about the bakery earlier. While she’s familiar with other Cantonese-style bakeries in Auckland, they’re far more expensive and not as charming.

As we watch people slowly walking past with precious white boxes filled with cakes and buns, tied up in Young’s signature yellow ribbon, Bing explains why she’s here. Young’s reminds her of the bakeries she visited with her family when she was growing up in southern China. “It’s about the memories for me.” The style of baking at Young’s is largely Chinese in origin, with local specialties like wife cakes, filled with winter melon, sesame seeds, almond paste and laced with five spice, and comforting, fluffy pork floss buns. But there’s also a European influence running through. The 150-year-rule of the British in Hong Kong, which ended in 1993, helped popularise the idea of rituals like afternoon tea, and the necessary sweet cakes and pastry that go alongside. Hong Kong bakery favourites like the custard tart and cream sponge take cues from the nearby former Portuguese colony of Macau. When it comes to Cantonese baking, Bing points out, the breads are softer and the cakes and pastries far less sweet than the treats you’d find in a typical New Zealand bakery.

Consie has been in the line since 9.35am. She works from home, and is taking a break from her computer to stock up on spring onion buns, barbecue pork pastries, coffee rolls and egg tarts. When Consie and I start talking, we’ve already been waiting over an hour and we’re still in the middle of the queue. This morning, she assures me, “the line isn’t too bad”.

“Sometimes the line can take around three hours”, but, she says, “it’s worth it”. Originally from Manila in the Philippines, Consie moved to Auckland in 2003. She’s been a loyal customer since her son, now in year 13, was in primary school. “He grew up on the food,” she says. The spring onion buns are his favourite and he’s also heartbroken Young’s will be shutting up shop.

Consie explains that the line moves slowly because once they’re inside, people spend so much time deciding what to buy. Most leave the shop with numerous boxes and bags. She’s quick when ordering though. “I’ve been coming here for so many years, I know what I like.” 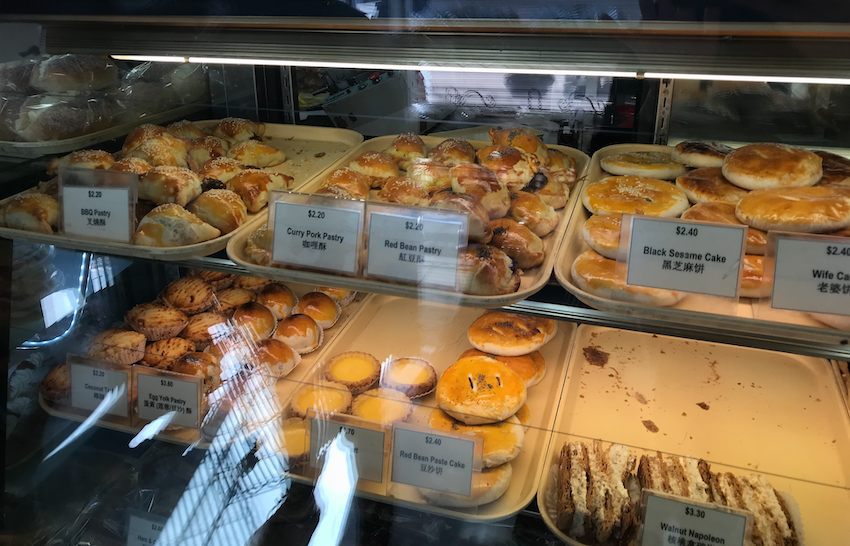 Pastries and buns in the Young’s cabinet (Photo: Charlotte Muru-Lanning)

Consie has been coming to Young’s as much as possible while the bakery is still open – she wants to eat the food while she can. Usually spending around $50 a trip, she gets snacks for herself and treats to fill her son’s lunchbox for the week, then the rest gets frozen so they can enjoy the baking for a little longer after the shop closes.

It’s 11.05am by the time I leave – over an hour and a half of waiting. Consie guides me through what to order: pork barbecue pastry, egg tart, mango mousse, coconut pastry, Swiss roll and the peanut butter bun. She tells me that I need to buy two of each – because I’ll want a second helping.

Andy and Hilia, along with their daughters who help run the shop, are “well known in the Asian community”, Consie says. The main reason she is so committed to lining up is to support them and see them off on their retirement, she says. “They’re a good family.”

In many parts of the world, it’s quite ordinary for people to wait in line for hours outside a restaurant or bakery. Nobody would bat an eyelid at a queue like this. In New Zealand, it’s far less common, so this line is testament to the quality of the food and the aroha customers have for the family who run this little bakery.