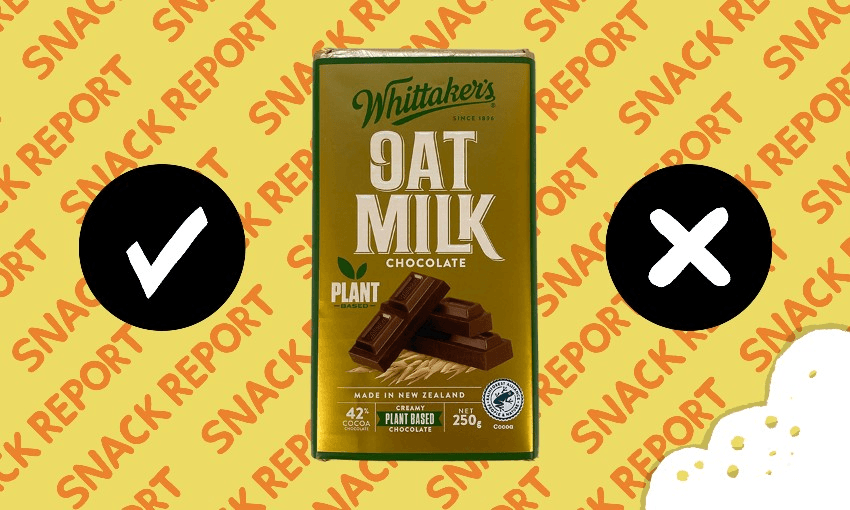 After much hype, Whittaker’s has officially announced its latest offering: Oat Milk, a plant-based alternative to milk chocolate. Mad Chapman delivers her verdict.

We were so excited, weren’t we? We heard a whisper on the wind that an oat milk chocolate was on its way, courtesy of the country’s best chocolate makers. I even wrote a whole news report about it. Whittaker’s rarely fails. Its creamy milk block is arguably the best staple block of chocolate in the world, so as someone who has a mild-to-moderate dairy allergy (meaning if I ate half a block I would simultaneously turn into a hive and shit myself) I desperately wanted Oat Milk to be good.

I’m sorry! I’m as disappointed as you are but unfortunately the previously invincible Whittaker’s has stumbled. What could have been a small step for chocolate and a huge step for vegankind has instead left the one vegan in the office today (not me) saying, “I’ll just stick to my dark chocolate, thanks.”

The start was promising. Classic packaging with a lovely green trim and the refined lettering. “Creamy plant-based chocolate”, it promised. Plant-based, yes. Chocolate, undoubtably. Creamy? I’m gonna say no. And therein lies the rub. Whittaker’s partnered with Harraways Oats to create this flavour, stating “Whittaker’s found a way of using existing factory equipment to grind locally sourced Harraways oats to create Whittaker’s Oat Milk”. Now wait one minute. Here I was thinking that an Oat Milk chocolate would substitute dairy milk for oat milk and, bada bing bada boom, a vegan classic is born. But they subbed the milk for actual oats? So not only were they venturing into a new realm in plant-based chocolate but they also decided to make the oat milk themselves?

If I were in charge at Whittaker’s – and I’m acutely aware that I am not – I would simply partner with an existing oat milk company rather than an oat grain company.

Because this chocolate is grainy.

The first warning signs were in the scent. It smelled waxy, like cheap chocolate. Except this chocolate will presumably cost the same as any other Whittaker’s block and is therefore not cheap.

But scents can be deceiving so I bit into it with high hopes. Sadly, the smell was accurate.

Unlike creamy milk (delectably melts in your mouth) or classic dark (delectably melts in your mouth a little bit slower), the Oat Milk chocolate was firm and had virtually no immediate flavour. I gave it some time but the flavour never appeared. Instead, it remained a muted, grainy version of dairy milk right down to the last bite. The waxy film stayed in my mouth for the rest of the afternoon.

Otherwise, I’d suggest some dark chocolate and a glass of oat milk instead.