Amanda Thompson and her family are attempting to cut back on the meat, so they gave all the vego sausies the local supermarket had to offer a hoon on the barbie. Here are the results.

I was a vegetarian once. Even the best of us take a well-meaning wrong turn on the tangled highways and byways of this life; and whether by that I mean in my decision to be a vegetarian, or in my decision to be an unvegetarian again so I could feel less conflicted about wearing shoes not made of plastic, I’ll leave up to you, gentle reader. Our society has made protein sourcing a tricky ethical issue, starting from the beginning with the breast vs bottle flummery and never letting up in the years to come. But if age brings any kind of wisdom, it’s the kind that stops you from getting into a hot, (online or irl) neurotic debate over food choices. Whatever makes your taste buds jangle, friends. I frankly can’t be bothered to judge.

But I am wondering: have choices for the Kiwi non-meat eater improved at all since I bought Meat is Murder on cassette? Finicky foreign food preferences (ie wanting to eat protein that wasn’t roasted for several hours and served with a potato) were not encouraged in New Zealand in the 80s, so youthful me quickly got used to eating meat and three veg, minus the meat. Or nothing. My grandmother would unironically make me a chicken sandwich “because there’s no meat in that!” and my mother would unironically give me pea and ham soup with instructions to stop being so jolly fussy and just pick out the ham. Just a man and his barbie (Photo: Amanda Thompson)

Since those dubious days our national cuisine has thankfully moved on, but my interest in not always serving up a lump of muscle fibre as the centrepiece of the meal has not. Legumes and pulses I’m already down with, but I’ve always thought once “fake meat” options became good enough to actually taste like meat – or, even, taste quite different to meat but in a very delicious, umami sort of way – I’d be keen as to include them in our family meal rotation. Friends both far and near have been waxing lyrical about the quality of new vegan “meat” turkeys and deli meats they have found over Christmas and diligent research has already turned up the best of our meat-free burger options.

I thought I might give diligent research a go myself, and where else to start but with the humble, beloved sausage?

Ever popular, sausies are a key component of a satisfying Kiwi summer. Whether you’re tracking poolside, beach hard, campground deep or Bunnings carpark adjacent, sausages are portable, easy to cook and will work with both your taste buds and your wallet. Plus they’re even better, if that’s at all possible, cold the next day. Judged by those standards, even a bad snag has got to be better than a good burger. Fight me.

Buying up every reasonably priced vegetarian or vegan sausage in my local supermarkets, I have spent barbecue season asking my whole family to share their honest opinions on meat-free meat tubes – including our most excitable and sausage-loving member, the dog. 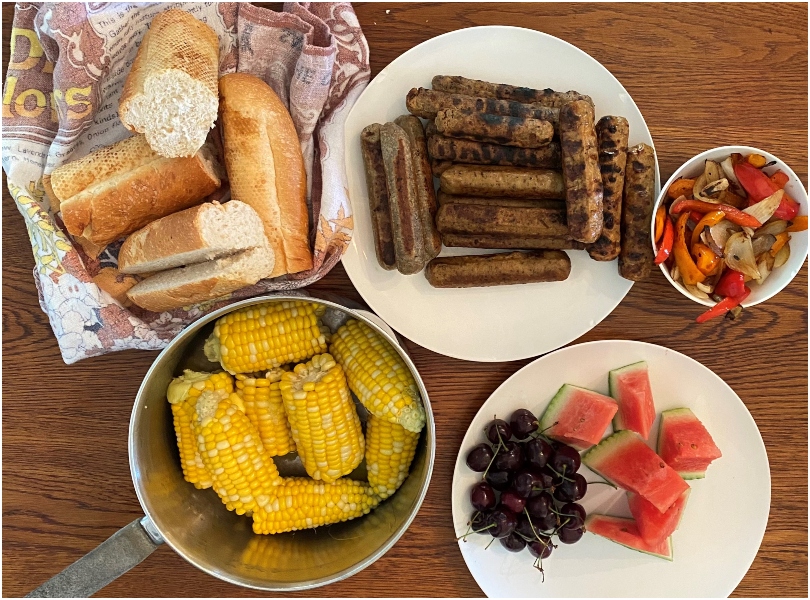 These sausages made my husband demand that I apologise to the barbecue for hurting its feelings. Like wet playdough extrusions, they were so soft we only managed to get half of the tubular globs out of their packaging without squishing them into fake flesh-coloured mush. Once on the barbecue these delicate wieners needed enormous quantities of oil to stop them sticking to the grill. Even so, initial reports were that it didn’t stop these snags from being drier than a plain rice cake in the middle of summer in the Sahara. The kids were not happy.

Dog rating: Dog seemed a little confused by the appearance of a sausage even though he hadn’t smelled a sausage cooking, but threw himself into eating it with his usual sausage-obsessed joy. Best sausage he’s ever had.

I liked these. They did have a bit of a funny texture but at least they had a texture so they scored well above the Tonzu sausies immediately. I’ve started with this cheerful point because I feel like I need to provide a bit of positive feedback before I tell you that they had a universally bad review from the rest of the fam. My children especially hated them. Funky seemed to be the agreed description, and they didn’t mean in a Solid Gold Disco Hits way. The sausages did have a slight bitter smell and aftertaste but I think it was a bit unnecessary for the kids to mime gagging and vomiting and fall to the ground pretending to actually die from “tofurkyitis”.

Dog rating: Dog made all sorts or whimpering sounds of pleasure and kept running round in circles snuffling in case he’d missed a bit. Best sausage he’s ever had.

Cold-the-next-day rating: I was the only one keen, but I enjoyed it. A nice firm texture, and really came to life with the addition of a bit of T sauce and butter on the bread.

Looked like a sausage, cooked like a sausage. Held its shape in a sausagey way. Tasted like sage & onion chicken stuffing – perfectly fine but also quite bland and a bit light on the savoury hit. OK once you had piled it up with onions and sauce, but at the end of the day missing something. Would gladly stuff a chicken with these, which I guess would be really missing the point.

Cold-the-next-day rating: Just as good as turkey stuffing the next day – so pretty good.

Much like the stuffing-flavoured sausage above, it was more like eating gravy-flavoured bread than anything else, but then isn’t that the case with a lot of the cheap fundraising-at-the-school-gala-type precooked snarlers you get anyway? And people seem more than happy to chuck a $2 coin at those. It was my family’s unanimous favourite vegetarian sausage, even if I found it bland.

Dog rating: Heavenly. Dog is getting an exhausted, glazed look, like a jolly uncle three helpings into an evening at an all-you-can-eat seafood buffet. Best sausage he’s ever had. I’m sorry. I couldn’t take it any more. I cooked these snaggies on a bed of bacon and wrapped them in the bacon and they were amazing. Look at that photo and tell me I was wrong. You can’t, can you? They seemed very similar to the Bean Supreme sausages above, neither fantastic nor terrible, grilling up nicely, but probably not worth paying by far the highest price of all our veggie sausage candidates.

Dog rating: Nobody was willing to give up a piece of their baco-saus so he could judge, which he found devastating. Two out of three of my couch cushions had their stuffing mysteriously interfered with in the following days. The situation remains tense. Best sausage he’s never had.

Cold-the-next-day rating: No way of knowing, they were all gone due to their bacon-infused popularity. Forgive me Linda, for I have sinned (Photo: Amanda Thompson)

All in all, my family has voted this a failed experiment. Even though we went into this mission open minded and open mouthed, I don’t think we’ll be taking it any further. I am reliably informed that New Zealand’s specialty vegan meat makers – Grater Goods being by far the most often recommended to me, so they must be doing something very right – are making better and better plant-based meal alternatives every day. But I’m resistant to making the bulk food shopping and cooking needed for my many self-diagnosed “starving” kids any more of a budget-and-brain-busting hassle than it already is. Like a lot of time-poor, overly harassed and economically hampered parents who already have a million things to do and decisions to make (which is every parent, really, unless you’re like a Kardashian) if I have to make a special effort to order a basic food item online, but separately to my baked beans and bananas, I really won’t. And if I have to drive many miles to drop many bucks at a boutique deli for that same basic food item, you can guarantee that I really, really won’t.

My advice for family-friendly reduced meat meals? Find your favourite falafel mix, or give the burger patty replacements from The Cool Gardner or Bean Supreme a whirl (they should all be available at even the most mediocre supermarket). Always have at least one pack each of chickpeas, lentils, and your favourite beans in your store cupboard for casseroles and such. And let the meat-free sausage dream go. 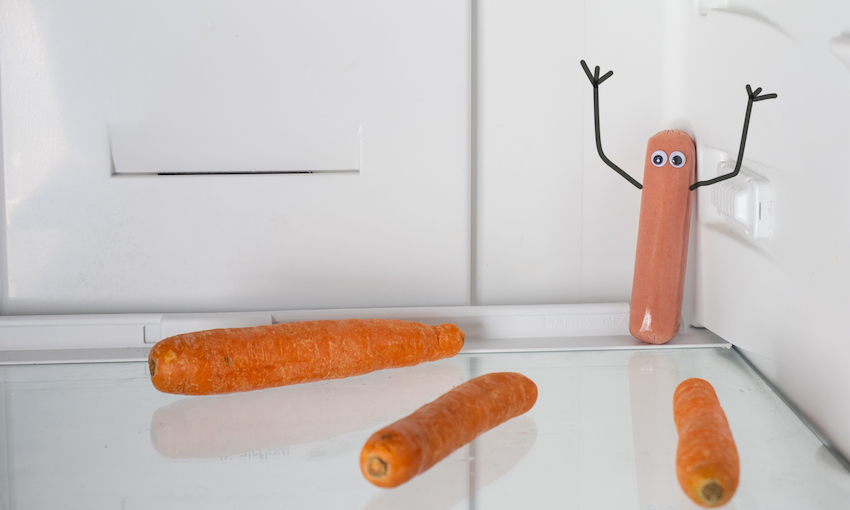