A late night excursion for fried food in level three.

The neighbours have been warned. On a quiet residential strip between Morningside and St Lukes, with only one food vendor, nights are supposed to be silent and dark. But at 11:50pm, cars line the street waiting for Tipene’s Takeaways to begin service. Music plays over the outdoor speakers and fairy lights flash like an emergency flare to the locked down. Inside, owners Kieran Narayanan and Stephanie Pene are making final adjustments in the tiny kitchen where Narayanan prepares all the food himself. He is grinning.

I visited Narayanan earlier in the day as he readied his shop for the big reopening. When I arrived he had finished all his food prep and was about to scrub the outdoor waiting area. His excitement was palpable. “We believe tonight is gonna be big,” he said, laughing. After posting a special menu on the official Facebook page alongside opening hours of 12-2am, Narayanan had already received a dozen pre-orders for midnight battered hoki. “For some people, takeaways are essential,” he explained. “Everyone has their own crutch and takeaways are, to some people, that one thing. To not have it for five weeks…it’s the famous saying: you never know what you have till it’s gone.”

At 12:01am, a bunch of people are about to have it. People are emerging from their cars and forming a line along the chalked spaces. Unlike the drive-through places across town, customers here have to be out in the open, buying their late night fries for all to see. There’s a camera person from One News standing near the entrance, filming people as they order or make pick-ups. I watch the customers, one by one, walk up to collect their food, turn around, and duck out of the flash of his camera. Some do a little wave of acknowledgement, others shield their eyes from the harsh glare. I watch them from the safety of my parked car and Google “what is the opposite of a moth”. 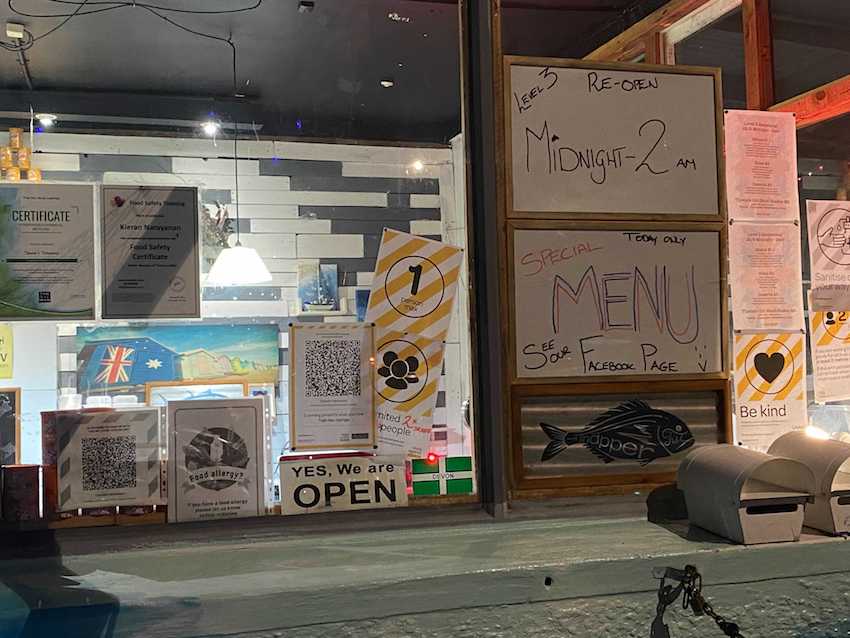 After a few minutes I join the growing line. As I step out onto the street I realise I forgot to put proper shoes on and am still in my slippers. They’re hand-me-downs from Mum and have “L” and “R” written on them in vivid. It’s too late to go home now and besides, this isn’t my first slippered food run.

The man behind me in line is a local, but has only been to Tipene’s once before. He says he’s here for the novelty and because “it’s good to support a local business”. Is it weird to pick up a fried hoki at midnight? “Yes.” When I ask his name, he thinks for a moment then gives me a fake one, and I wonder what he’s so embarrassed about. Ten seconds later the light beam of the news camera swings our way and I instinctively position myself so that my face will be blocked by the person in front of me. Everyone has a line and apparently mine is “slippers on the news”.

When Narayanan and Pene opened a takeaway shop in early 2018, they named it after their young son Tipene. Now Tipene is five and when he goes to school “he’s known as the kid who has the fish and chip shop. So I have a standard to meet.” The shop was a brand new venture for Narayanan, who trained in London and worked in fine dining restaurants before moving to Aotearoa in 2009. “Being a chef my whole life I never thought I’d have a fish and chip shop,” he said. “I always wanted my own business to do with hospitality but I always thought it would be a restaurant.” Instead, he spends five nights a week perfecting the art of deep-frying and couldn’t be happier. “I love what I do. I love the fact that I work for myself. I love that it’s my son’s name on the door.”

By 12:15, there’s a small crowd spread out around Tipene’s. Pre-orders take precedent and they ballooned in the hours before midnight. So much so that one man walks up to order and is politely turned away as there’s no capacity for new orders. He walks back to his car muttering about trying the gas station. Thankfully, the One News camera has left by the time I confirm my order but he’s been replaced by a photographer. I can hear the shutter clicking as I wait next-to-but-not-near a man wearing track pants tucked into woollen socks and tartan slippers. There are now customers waiting across the street, up the road, and in their cars. Whatever the motivations, opening at midnight has worked for Narayanan and Pene. 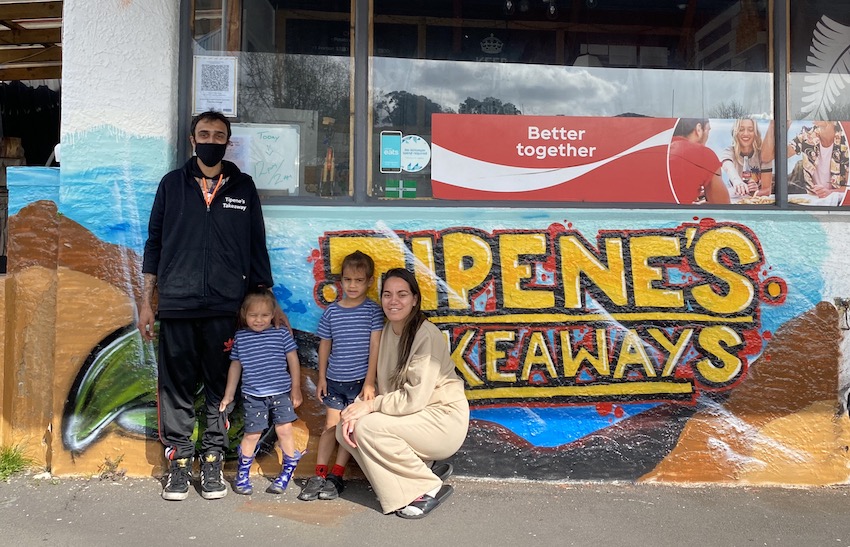 When we talked that afternoon, Narayanan spoke at length about the process behind the food at Tipene’s Takeaways. How he uses the bakery in Kingsland for their buns, and local markets for their vegetables. And how they haven’t sold tarakihi for two years for sustainability reasons. He said he jumped up and screamed when he heard the alert level announcement because it meant he could get back in the kitchen, and he wanted to do that as soon as possible. “Some people might call me greedy for [opening] tonight but it’s not about the money. I haven’t done what I do best for five weeks.”

What Narayanan does best is fry food. He sadly admits to frying chips while his second son Ajit was born “because it was a Saturday evening and i couldn’t afford to close my business” and last year he worked in the kitchen for three months with a broken leg. “This for me is just about doing what I do best. To be able to do that again is a real joy, a privilege, an honour.”

At 12:31 my name is called and Pene emerges from the shop with my order: steak pie with chips and gravy, onion rings, and a deep fried brownie (I panicked, alright). As I pick up my food, I hear the photographer’s shutter clicking multiple times and accept that he now owns my soul. I duck awkwardly under the rope cordon and try to turn away from the camera without being too obvious. The opposite of a moth is a person holding fried food in public at 12:33am while 100% sober.

I walk back to my car, passing patient customers on the way. From across the street I can still hear Narayanan yelling out orders from the tiny kitchen of his son’s fish and chip shop.