It’s the feel of food that Chloe Smith is drawn to. “I really enjoy the challenge of trying to make something that has a really complicated texture,” says the Australian artist.

Under her pseudonym “I Make Soft Food”, Smith meticulously crafts replicas of everyday food items out of felt. Convincingly achieving a specific texture – be it a rockmelon’s hardy skin, the airiness or a pavlova, the pith of a mandarin or individual grains of jasmine rice – can take several months of experimenting, and it’s become an obsession.

“I’d go to the supermarket with my boyfriend and he’d find me near all the fruit, looking at it as if I was some kind of alien that had just arrived here and never seen a pomegranate,” Smith says.

Next week, a selection of her replica food will be on show as part of Visa Wellington on a Plate.

While she won’t be in the country because of the travel bubble closure, the 18 soft sculptures have already arrived in Aotearoa safely. Smith is staying tight-lipped about exact details of the week-long show, entitled It All Felt Too Hard, but says “there’s a couple of New Zealand favourites in there”.

Smith wants visitors to her Wellington show to feel there’s something a bit wrong about the food they’re looking at, beyond the fact that they’re, well, replicas. “I wanted to add another layer on top of that, again, of things being a bit weird.”

Though born in North Queensland and now based in New South Wales, Smith spent eight years living in Melbourne and partially credits the food-obsessed city with her fixation on everything edible. But her Chinese family background means food has forever been central to Smith’s way of looking at the world. “Food is everything and it’s definitely the way that my family expresses itself.”

Before she began working with felt, an ice-cream maker gift from her mum became an outlet for her interest in food illusions. Smith kept a notebook of experimental flavours she could capture in ice-cream form and every few nights would attempt a new concept; shiitake mushroom, buttered toast, tom yum soup. “I got really obsessive with that,” she says. “It all got a bit crazy.”

There’s little surprise that Smith’s art would revolve around the contents of a fridge, freezer or fruit bowl. “It’s a pretty natural progression that when I started making art that it would be food related.”

A half-peeled mandarin that features in the show was inspired by an early childhood memory of being in the cold with warm gloves on, and trying to find a way to peel a mandarin. “I felt like that process was a very sensual process of peeling a piece of fruit.” Smith’s first trip to Japan sparked a fascination with the ubiquitous shokuhin sampuru or fake foods that occupy storefronts and restaurant facades, and are shrunken down to Lilliputian key rings or fridge magnets for tourists.

Smith counts Takizo Iwasaki, the Japanese businessman credited with inventing the fantastical models (which are still mostly handmade) in the 1920s, as an inspiration. “I’ve been very inspired by the seeming limitlessness of that illusion,” she says. “I also like that it’s just part of everyday life there.”

Some shokuhin sampuru are particularly boundary pushing, something Smith tries to recreate in her own work. She recalls being particularly struck by a replica pancake stack. “Five foot high with some maple syrup sort of tearing down it in this impossible way, a bit of butter on it – it’s like, what the hell?”

In our technologically advanced world where nearly everything can be faked – or, even more ominously, deep-faked – Smith believes there’s something especially appealing about the childlike playfulness of more lo-fi illusions, like shokuhin sampuru or her own felt creations.

There’s something innately silly in the premise of creating something that looks like it can be eaten, but it can’t be. That brand of playfulness is at the heart of Smith’s work.

“It’s a point of accessibility,” she says. “Everybody has the capacity to be playful, you don’t need to have some crazy degree to be able to interpret art that’s just playful.”

This intrinsic silliness of Smith’s faux head of cabbage, jar of pickles or container of Indian sweets is tempered by the more serious ability of this type of art to encourage people to see the world around them in a different and more enchanting way. Elevating those ordinary, mundane and taken-for-granted objects of everyday life.

“A really basic motivating point of art is just changing people’s perspectives, even in a really little way like that – it doesn’t have to be these big political paradigm shifts.”

When creating work for a Japanese exhibition a couple of years ago, Smith took inspiration from a bleach bottle she’d spotted around the country. She was captivated by it. “It’s got this beautiful pastel pink lid and then this great teal bottle”.

“A girl came up to me and said, ‘That bleach bottle has sat on my grandma’s laundry for as long as I can remember, and I never thought twice about it. And now I’m fully realising how beautiful it is – it’s a really beautiful design, and I just never noticed before.'” 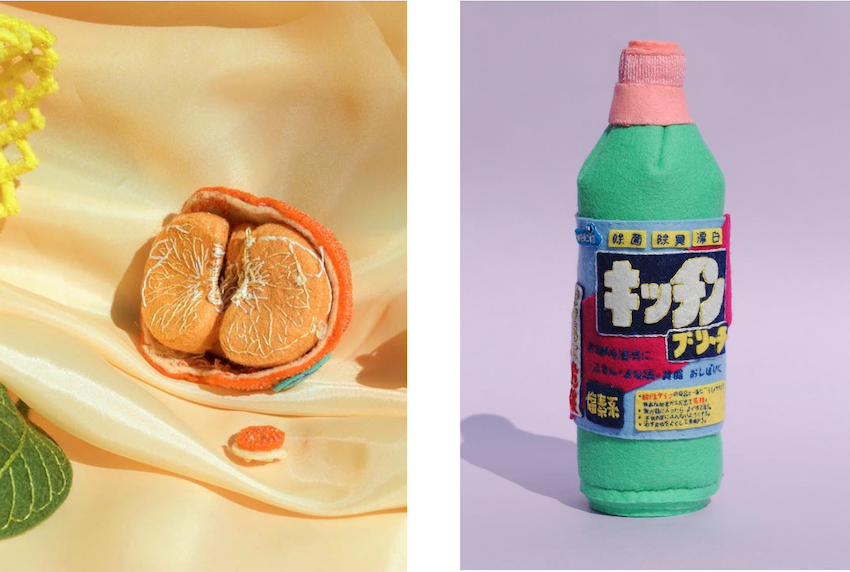 Smith’s pieces have the ability to be both cute and unnerving at the same time. Although the felt she moulds into her toothsome-looking sculptures is “a wholesome, gentle sort of material”, the end products are often spiked with an element of weirdness that can be hard to place.

Smith credits the disquieting nature of her work partially to her dark sense of humour – “being able to insert that dark humour lends itself to that uneasiness”.

And then there’s the unnatural eternal nature of her squishy sculptures. Taking food that is for the most part perishable and temporal and replicating it in a material that could last for ever does give it a somewhat sinister quality – especially when it’s captured in a way that is crumpled, moulding or decomposing, as Smith’s pieces so often are.

The art world has a tendency to relegate soft textiles, typically mastered by women and non-white communities, to the realm of craft – separate from the traditionally male-dominated world of paint, print and stone sculpture. For Smith, there’s consequently some gendered baggage that comes with being a felt artist. “There’s definitely an element of that for me that is very conscious of the historical context of being a textile artist.”

In her own way, Smith rallies against this demotion of her chosen material. “I want to elevate textiles as something that has the capacity to achieve the exact same things that any other art form has.”

@imakesoftfood’s exhibition, It All Felt Too Hard, is on at Te Auaha, 65 Dixon Street, Te Aro, from August 2-8 as part of Visa Wellington on a Plate