Think not being able to pop to the supermarket whenever you fancy is hard? Try being Juan Munizaga, the chef at Scott Base, who gets one delivery of ingredients a year.

Covid cooking. It’s a whole thing. Often the main event of long lockdown days. Something to look forward to amid the isolation.

Now imagine if your bubble was big, 90 people let’s say, in the middle of nowhere and surrounded by nothing but ice. How would your delta dinners look then?

For six months of the year Juan Munizaga works as a chef on Scott Base – New Zealand’s HQ in Antarctica. 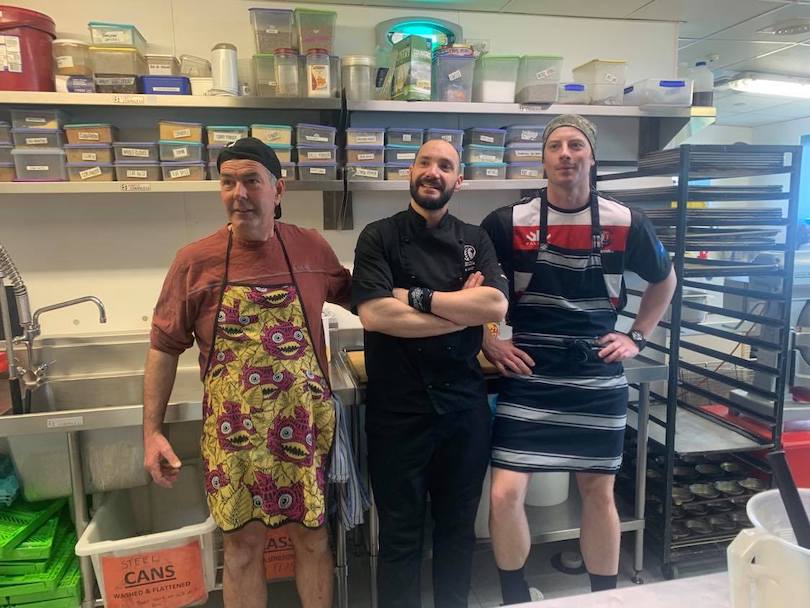 Originally from Chile, Munizaga got his cheffing degree in Argentina, started out at The Heritage in Hanmer, helped open Rata in Queenstown, and kept going from there.

Chat to him about his two seasons on “the ice” and one thing is clear: this man loves his mahi and reckons everyone should get to Antarctica if they can.

While cheffing is a challenging job in most circumstances, the gig is pretty different when you’re in one of the most remote parts of the world.

For one, there’s not much water around. It’s all locked up in ice, meaning even a small kitchen fire is actually a huge risk.

As a result Munizaga, and every other base crew member, have to arrive in Antarctica with their expertise in addition to a firefighting certification, survival skills and more. Freezers for food storage at Scott Base (Photo: Supplied)

And while lots of us rushed to the supo last week for a last-chance stock-up, Antarctic chefs actually only get one shot.

Ingredients are flown into Scott Base once a year, in the middle of summer. When Munizaga arrives in spring, whatever’s left is a bit of a surprise.

The vast majority of the base’s food stores are frozen or dried. Occasionally the crew get blessed with fresh fruit and veg when there’s room on an incoming plane and favourable flying conditions. It’s rare for those two things to align, Juan says, so “freshies” are quite exciting.

Despite the extreme conditions and zero convenience, the base’s 86 researchers and crew eat well. Like, really really well, thanks to Juan. The kitchen and dining area at Scott Base (Photo: Supplied)

At the start of each season Munizaga gets to know his group as quickly as possible. They spend six months together so he’s got to figure out what everyone likes, dislikes, and what their dietary requirements are.

“Basically it’s like cooking for your family – you need to make them something good, you need to put love into it, and look after them.”

In Antarctica, meal times provide structure in a landscape where hours and days can quickly run together. “They’re a moment to get a break, have a chat, get warm, they’re a big deal,” Munizaga says. 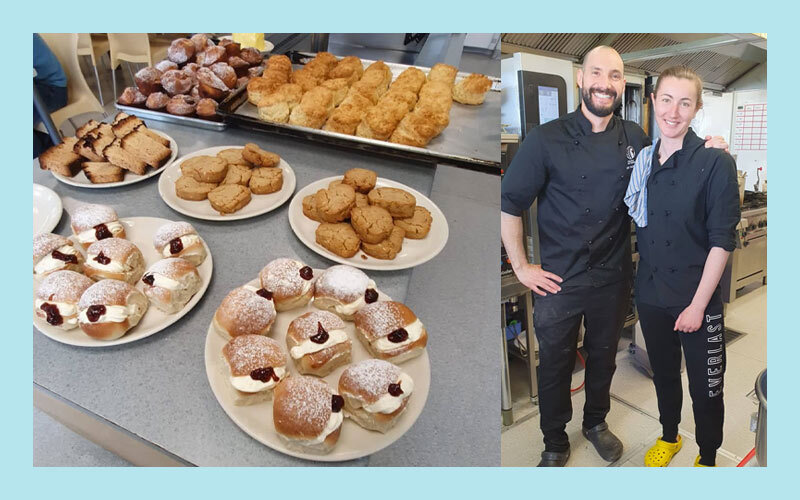 An array of baking; and Munizaga with Alex, a communications operator who makes everyone’s birthday cakes (Photos: Supplied)

For a special dinner last season he made a three course meal: venison carpaccio with remoulade, parmesan, and balsamic followed by hoisin-glazed pork belly with parsnip crisps and a gluten-free brownie with berry coulis and pistachio crumb.

While that was a special occasion, the day-to-day dining programme also sounds pretty top notch.

Each day a breakfast buffet is followed by morning tea, lunch, afternoon tea, and dinner. Everything is made from scratch, there’s always brunch on Sunday, KFC is recreated at least once per season, and Juan’s cinnamon buns are always a favourite. All baking has to be made fresh each day. Antarctica has almost zero humidity so everything dries out fast.

“A successful season for me would be everyone coming back with at least five kilos. If we don’t hit that target, we need to do a review, because something’s not working,” Munizaga laughs.

While there are normally three chefs on base, they work in solo shifts.

“You are on your own. Again you’re basically cooking for your family of 86, you need to spoil them, and use your ingredients in all possible ways.”

Creativity and recycling are two other key parts of the job. Munizaga Juan makes risotto for dinner, for example, arancini balls usually make an appearance the next day. Being able to reinvent and safely reuse is crucial in the Antarctic kitchen.

“Antarctica New Zealand is very committed to recycling and zero waste,” Munizaga says. All waste gets sorted by crew members and sent back to the mainland for recycling and even composting.

“I always go for minimum waste in my cooking. But then there are things you wouldn’t think of. Chicken blood, for example. We put that into drums, freeze it, and send it back. You don’t want any of that getting into the field because it could possibly introduce harmful bacteria to the seal colonies.”

When Munizaga has time off, he heads out to see the whales, penguins and other wildlife and enjoys simply watching the ice change throughout the season. He’s also a keen wildlife photographer.

After one season on the ice, Munizaga says, most people want to go back.

“It’s a pretty special place. It’s cool to be a part of something like this. You end up making great friends and I feel proud representing New Zealand in Antarctica.”

If you’re keen to go, Munizaga recommends starting with an email.

“I personally just sent an email to Antarctica New Zealand, everyone there is really nice. It’s just a matter of finding out what they need. You don’t actually have to have specific knowledge, you can run the souvenir shop or the bar. If you really want to go you can make it happen. They’re always looking for people.”