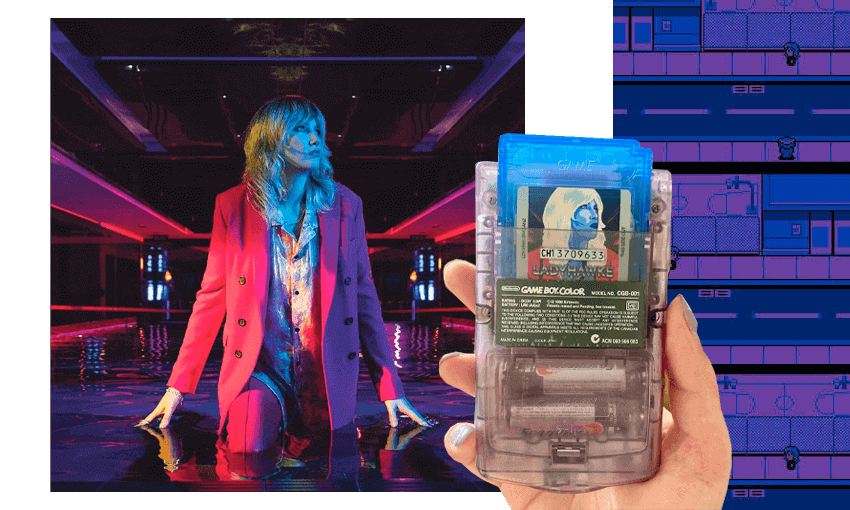 What happens when music and gaming collide? A damn rad Ladyhawke game on the Game Boy, that’s what. (Image design: Tina Tiller)

What happens when music and gaming collide? A damn rad Ladyhawke game on the Game Boy, that’s what. (Image design: Tina Tiller)

The opening moments of Time Flies: The Game involve a small 16-bit figure paddling across an ocean to land on an island. A small black cat informs you that you’ll have various tasks to complete, which include a memory puzzle inside a brain shaped like a house, cleaning a house and cooking a dinner for a mother figure, jumping on clouds to gain wisdom from a cat, and throwing an egg at a local hooligan.

It’s a move that makes sense for the New Zealand artist, who has been an avid, lifelong gamer – she recorded an episode of popular podcast The Spark Parade where she enthuses, at length, about The Last of Us. She’s also found success as a Twitch streamer, with nearly 3,000 followers on the platform, and has used it as a key promotional arm for her latest album.

But what the heck led to Ladyhawke – Pip Brown, as her friends know her – releasing a game for a console that hasn’t had a commercial release in 24 years? I spoke to the team behind the album, including Brown herself, to get the lowdown.

Time Flies: The Game was born out of necessity, prompted by – what else? – the impact of the Covid pandemic. With the ability to tour pretty much gone, releasing a game would be a way to keep the album campaign and buzz going beyond its initial 2021 release. The challenge was then finding something that lined up with the Ladyhawke brand.

“This is the first album that BMG had worked with Pip on, and we went into it knowing about her love of gaming,” says Fuchsia Davidson, NZ marketing manager for BMG. “She’d never been that keen for social networks, but really found her voice on Twitch.”

The team knew they really wanted to lean into that side of Brown’s life with this campaign. Initial discussions revolved around potentially getting vintage Game Boy games and turning them into some sort of accessory, but the idea was ultimately abandoned –  it turns out vintage cartridges are super expensive and gamers aren’t especially keen on seeing them destroyed.

Having found a company on Chinese ecommerce site Alibaba that makes brand new Game Boy cartridges, the team got to work on making an entirely new game from scratch. Harry Billinge, a computer science student in Wellington and the brother of one of Davidson’s friends, was brought on to design and build the game itself. “I’m relatively new to making video games,” says Billinge, “but I’ve messed around a bit, and I thought it would be a good test to try and build some of that stuff.”

The brief was simple, but broad: Make a game related to the album using the Game Boy Studio framework.

It was decided that every song on the album would have its own quest, challenge or mini-game. Billinge says the game took just over a month to make from start to finish, with a lot of back and forth between he and Davidson to make sure it stayed in line with the core concept.

The end result is surprisingly funny, an aspect that Billinge didn’t necessarily expect players to pick up on. “I like it when people actually laugh at the jokes I put in! When I was first showing my friends, they were playing it, and I realised that I can actually be a little funny sometimes.”

Billinge says he learnt pixel art as he went along, eventually making all the characters and tile sets by himself. “I definitely went for that Pokemon look,” he admits. “The Game Boy Studio encourages that format of game. You can do some other styles, which I dabbled with a little bit, but it definitely fits that top-down Pokemon style.”

While artist Diego Rago did some of the larger, more complex artwork, the rest of the game is all Billinge.

Except of course, for the music.

For the Time Flies soundtrack, Davidson reached out to Jeremy Toy, one of the producers on the original album. As luck would have it, he’d already remixed two of her older songs – ‘Paris is Burning’ and ‘My Delirium’ – in a chiptune style, which he’d recorded  onto a cartridge and given to her (with an old school Game Boy) for her birthday.

“Luckily I knew all the songs quite well from mixing the record,” Toy says. “So I chose the most memorable bits of the songs – the most hooky bits – and put them into the program.” Toy had made songs on Game Boys in the past, using tracking software; not surprisingly given its association with a console that’s close to 30 years old, creating music for the Game Boy is a very stripped-back process, Toy says.

“You only get a melody, a synth, and some drums to play with. I broke down six songs into those three elements. I picked all the bits that my son would sing of Pip’s songs because he knows all the songs off the record, and he’s really good at picking up melodies.

“He would sing the guitar parts or the vocal or whatever – so I used whatever bits he was really into.” The results speak, or sing, for themselves. The catchiest bits of the songs get stuck into your brain while you’re completing each quest; I’ll have the chorus of ‘Time Flies’ in my head for a long time thanks to the lyric jumble attached to it.

All was going well, but there was just one problem: they hadn’t told Brown about it. .

“Pip had no idea what was happening,” says Davidson. “She knew we were creating something that would be part of the campaign, and that there was a game involved, but that was it.”

Still, the project didn’t come as a huge surprise to the musician, who’s been performing as Ladyhawke since 2007, and has released four albums under the moniker. The first inklings came when Toy started sending her chiptune versions of tracks from the album.

“I thought it was a gimmick for something else, just some extra content. I had no idea they were actually trying to put it on a Game Boy cartridge,” she says.

The standalone-game idea was eventually pitched to Brown, and she was a big fan – especially when she saw a photo of one of the cartridges. “I couldn’t believe it. It would’ve blown eight-year-old me’s brain. What the hell? I have my own game!”

So what does she think of the finished product? She says she loves it, even if it’s harder than she expected. Despite being an avid and very experienced gamer, she says she hasn’t actually finished the game, having got stuck on one particularly difficult memory puzzle (full disclosure, I was stuck on it for a full 20 minutes too). She hasn’t even met Billinge, but is full of praise for his work on the game: “He’s really done the genre justice.”

Even though the game is part of the many-headed hydra that is music promotion, what excites Brown most is introducing her younger fans to this old format. “I’ve had all of these interactions with them through Twitch and they’re so interested in gaming. The way we’ve done this has introduced a lot of them to old school gaming, which a lot of them have never known about, so that’s exciting to me.”

Billinge echoes her sentiment of introducing people to something new, or something old. “I like the idea of people looking at this and thinking that they can make a game as well, using Game Boy Studio. I love the idea of a small community based around something retro: reviving Game Boys and using these tools that people built that are all open source and really, really easy to use. I love that – encouraging people to make that sort of thing.”

That sums up the best part of the game, the one that came up repeatedly in conversations around it: your character, the Pip Brown-esque avatar, falls down a massive pit, and ends up strolling down a seemingly endless street. While it happens, a familiar sound happens: A tinny, chiptune version of ‘Paris is Burning’. It’s a beautiful melange of eras: a throwback to the 80s referenced by the song, the 90s heyday of the Game Boy, the late aughts of the original song, and the interaction of the player experiencing it right now, in the present day.