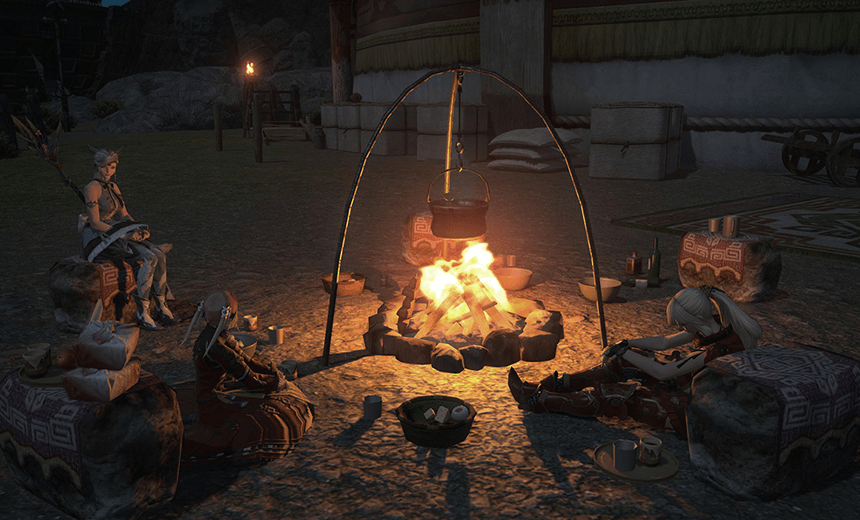 The Stormblood expansion is finally open to travelers – get in before the trustafarians with our exclusive guided tour by Eugenia Woo.

For the uninitiated, Final Fantasy XIV is Square Enix’s answer to the flood of MMORPGs out there. It had a bit of a rocky beginning; it was panned by critics and players alike on release, but it’s since had technical reboot which resulted in the iteration that we all play today. Stormblood is the latest in a series of expansions, as per the predictable MMO formula, and it brings a whole host of beautiful landscapes, characters, and swimsuits to all budding Eorzean adventurers. There’s lots to do in Stormblood, but here’s a guide to some of the best that the land has to offer.

Kugane is the perfect holiday destination for the weary traveler. It looks, sounds, and probably smells a lot like turn of the century Japan; it straddles the old and the new in terms of architecture and culture. A bustling port town, it’s home to a number of standout tourist magnets in the form of onsens, shops, and a range of historical attractions. For those looking for a night-time tour, the city is safely guarded by the Sekiseigumi and plays host to a variety of other species. A certain catfish does a walking tour of the city for those who are looking for something unconventional, and if entertainment of the slightly more adult variety is what you want, then a nifty spot off the main street boasts a stable of exotic dancers of all shapes and sizes. Don’t worry about having to skip leg day either – Kugane is home to the most challenging platform puzzles that Eorzea has ever seen, so grab a bro and crack open a cold one on the rooftops of the city as the sun sets.

Diving in The Ruby Sea

For those who prefer their vacations a little more tropical than others, the perfect destination is the Ruby Sea (if you’re lucky enough to fight your way past a giant sea siren and live to tell the tale). There’s more than enough sun and sand to go around if you love beaches, with scrumptious king crabs and other crustaceans meaning that surf and turf is always on the menu. The main reason why people venture out here, however, is probably the pirates. Blessed with bangin’ bodies and always ready to flirt, they’re the perfect summer fling and they’ll help you arm a revolution against an imperialistic nation on the second date. Second to the swashbuckling babes is the metaphorical pearl of the sea – the underwater havens dotted among the islands. You can take to the back of a striped ray and cruise around the depths of the ocean for a truly unique experience. For a memorable end to your scenic tour, be sure to stop by the opulent palace housing the cursed princess of Sui-no-Sato. Warning: this isn’t for the faint of heart.

Brawling on the Azim Steppes

If you like to live a little on the wild side then take yourself to the Azim Steppes, where the yak population rivals that of the native Xaela. Home to a vast number of nomadic tribes, there are lots of parallels with the Mongolia of old. Whether it’s hunting goats with the mountain-dwelling Khatayin or testing your chess skills against the Khan of the Kharaqiq, there’s something for the whole family. For a truly unmissable spectacle, keep your eyes and ears alert to the songs of the Qalli, who communicate only through music, or try your hand at taming the wildest bird of all. Don’t fret if you’ve had to bring the kids along with you; the region’s largest trading outpost has a dedicated minder for the little ones so you can explore the land til the sheep come home. When you’ve had your fill of the collegial atmosphere in Reunion, take to the steppes with a few of your closest friends and participate in the Nadaam – a battle royale where it’s every tribe for itself – because there’s no better way to honour the land and the hospitality of its good people.

Now that you’ve had an itinerary absolutely brimming with R&R and the finer things, it’s probably time to actually earn your keep as the Warrior of Light. For a little taste of the hero lifestyle, you’ve got to look no further than Yanxia. Once the shining fertile jewel of Doma, it has a certain rustic charm that years of occupation haven’t quite quashed. While it would have made for a pretty countryside holiday a few decades ago, the star of the show here is laying waste to the Imperial forces that make the lives of everyday citizens a living hell. The general consensus throughout the lands is that the Imperials are a bunch of pretentious assholes, and everyone from your comrades back home to the snakewomen of the plateaus has sussed out that they’re public enemy number one. Call upon the ninjas and samurais of Kagune, the blustering pirates of the Ruby Sea, and the hard-living, hard-drinking Xaela – you’ve earned their trust and their respect after paying attention to their customs and breaking bread with the best of them. You have to protect Eorzea for the next generation, and the only way you can do that is by breaking the chains of the empire that spits on the lives of your countrymen. Share one last meal with your mates as the sun rises on a new dawn in Doma; you’ll only get one chance to storm the castle and to change your destiny, so you’ve got to make it count.