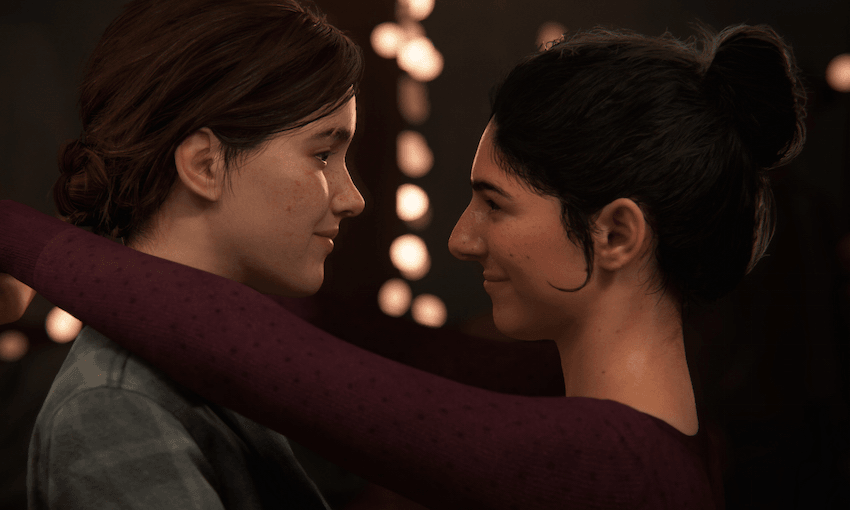 A screen from The Last of Us 2, showcased at this year’s E3 expo.

A screen from The Last of Us 2, showcased at this year’s E3 expo.

This year’s E3 was quite possibly the gayest E3 ever. Of course, Sony’s naughty kiss was one of the main head-turners, but there was a lot more simmering under the surface during the 2018 expo.

E3 takes place in Los Angeles, home of the first ever Pride Parade. Now in its 48th year, the parade still happens – and it takes place just down the road from the convention on the weekend before it, this year attended by around 170,000 people. They’ve always been worlds orbiting closer and closer to each other, but this year LGBTQ+ came a knockin’ right on the giant glass doors of E3, with some pretty big companies answering.

Sony knew it was coming. They released this amazing LBGTQ+ theme about a week before E3 and it POPPED; Twitter went mental after the link was published. I’m sure it upped their confidence around opening their unconventional briefing with Ellie and her GF’s scene from their upcoming survival-horror game, Last of Us Part II. Hats off to Sony for leading the charge and taking on the homophobia and whiney Reddit posts from ga(y)mers who were forced to be confronted with their sexualities for the first time.

Another bold Sony move, along with developer Square Enix, was to support the first Los Angeles Gaymer Society’s (LAGs) E3 LGBTQ Party. These guys had hosted parties around E3 before, but nothing that was officially supported by heavyweights, let alone triple-A tier companies. Before arriving I’d quickly scanned the info on the Facebook event page to locate key info, thinking it’d just be a small gathering: nerdy gamer boys and no cover charge. Very chill. The main piece of info I missed was that 2K people had hit ‘interested’.

I turned up to the door of The Precinct on South Broadway just as a drag queen barrelled down the stairs. There was a line around the block but I aimed for the bouncer with a ‘New Zealand privilege’ line in my back-pocket. Who do I think I am?

Me: “I’m here for the party umm from New Zealand media…”

Drag queen from the stairs pointing at me: “You, boy. You need to be up there RIGHT NOW”.

She was a big lass and the bouncer didn’t attempt to argue with her. I was in! I was immediately thrown into a sweaty, messy room with t-shirtless nerds and a giant lit-up ‘manhole’ sign. “One of the blue ones for Mr. Kiwi journalist over here!” yelled the drag queen from the stairs, and off she went. The bartender armed me with an unnaturally blue and over-alcoholic ‘Mana’ Margharita before I was sucked by the swirling crowd into the next room.

E3 crowds have a distinct 18 year old’s gamer bedroom smell to them. I have it down to a combination of Monster Energy and excited sweat; it’s a smell like no other in the world.

This room smelt like that 18 year old grew up to be 26 and found their parents’ perfume cabinet. A pungent aftershave-slash-body-odour mix, to the point where your eyes start watering. I looked up and caught an amazing drag show being performed in front of a PlayStation VR advert. Surreal.

The drag artist’s name was ‘bitqtchpuddin’. She was a self-acclaimed gaymer and the winner of the second season of a fierce American drag show called Boulet Brothers’ Dragula. “Last call for the raffle, bitches!” she mouthed into the mic, clutching a limited-edition God of War PlayStation Pro. “For all you daddies out there, you better be holding your tickets up high!”

Everyone who’d bought a drink was in the draw to win prizes throughout the night, including a PS VR system, a gold wireless headset, signed and framed Square Enix posters, and that crazy God of War console. I know we don’t watch videos for more than seven seconds these days, but it’s definitely worth holding out until Bitqchpuddin’ gives out the last prize, Here’s how it went down:

On top of PlayStation and Square Enix’s contribution, all the proceeds for the raffle went to the Los Angeles LGBTQ Center’s Program for Youth Gaming.

So much good was being done in one room, I needed to find those responsible. I went backstage to hassle four of the organisers: Ryan Bryant, Christopher Bryant (not brothers, definitely sisters), Yamil Remerez and Kanon Spackman.

Yamil: It was our first night hosting a party with PlayStation and it really could not have gone better. Everyone that came had a great time. It felt so inclusive.

It felt like an amazing, loving environment. One thing that we didn’t expect was for 2,000 people to click ‘interested’ on Facebook, I mean that’s unreal. I think it showed a lot of executives at Sony that were here how big and impactful the LGBTQ movement is within video games.

Kermath: How many people were you actually expecting?

Yamil: One hundered initially, then we were shooting for two hundred.

Ryan: Any time a company takes to be inclusive and show any type of love, it’s just an incredible thing for the community to see. To be a gamer, and to be included in this type of environment just makes things so much more bearable.

How many years have you been running LAGS for?

Yamil: It’ll be six years in October since I started it. Our first official event had like, thirty people in a local bar, and now we have like over a thousand members so it’s really exploded in six years.

What’s next for you lads at LAGS?

Yamil: I think what’s next is helping Sony grasp what it is to be a gamer in the LGBTQ world. There’s a lot of homophobia, especially on Twitch. Having a party like this, we’re showing that inclusivity is a good thing, and that people, especially gamers who don’t know a lot of LGBTQ people, are included in our events. And hopefully helping the mind frame of some people who may be homophobic in the video game community.

Ryan: Not just Sony. We were lucky enough to have developers and publishers in the industry turn up tonight, and have had some of them come up to me and say ‘this is amazing and I would love for us to be involved’. I admire Sony for taking the leap of faith in us, and in this community. It’s opened the eyes of other developers that this community exists, and we are here not just as consumers, but supporters. We support you and you support us.

Yamil: I think the issue that I’ve seen not just in LA but all across the world is that a lot of gamer groups unfortunately have had a lot of gay [male] support, but we’re trying to be more inclusive to lesbian, bisexual, transgender-plus people who don’t feel as welcome in the gamer community – because inside every community there’s people who still feel ‘outsider’. It’s something we’ll actively continue to try for going forward.

Are you worried about pink-washing, or companies doing inclusive things now to stay in the mainstream?

Yamil: Not at all. I think the thing is companies are still actually afraid. A lot of people in the nerd community can be very critical, especially in online forums and on the internet. So any company that’s willing to speak up we are happy to work with. I think it shows a lot of bravery on the company’s behalf. Again, Sony and PlayStation were willing to host this event, but they had no idea what this was going to be. Now they’ve all seen it’s something that people want. [They got involved] not because it’s lucrative, they just understood it was a community worth recognising.

What would you like to say to partners, developers and companies that want to get involved?

Chris: One of my best pieces of advice that sounds ridiculous is reach out on Reddit; there are online forums and communities. LA Gaming Society was born on Reddit. Just have a look and see how to start inclusivity in your company where you talk to people who are LGBTQ+, and get more and more people involved to have their voices heard in your companies.

Ryan: Look within your own heart, your own companies. Kanon [Spackman] has worked for Sony for a number of years, and this event would have not have happened without him. All he did was reach out and they believed in him, and us, so I think it’s just a matter of believing in your employees and listening to them. They’ll make it happen. It’s taken Sony almost 10 years to come around to it and now they have, and we’re super excited about it.