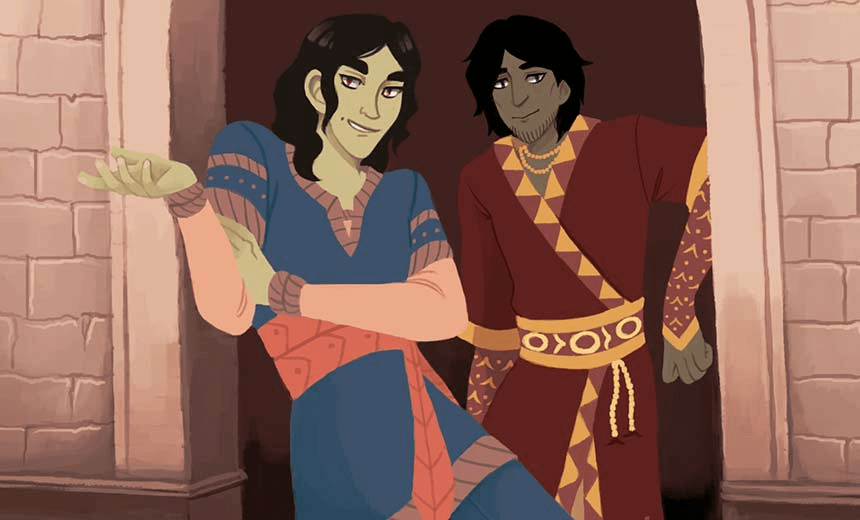 Those visual novel games can be extremely hit or miss, but Matthew Codd reckons locally made Inverness Nights is a high water mark for the genre.

A few months ago, Kiwi developer Maddi Mackenzie released Inverness Nights. “Break up with your boyfriend in Inverness Nights, a queer historical fantasy visual novel,” the media release said, calling to mind a more sombre spin on the likes of Dream Daddy and Ladykiller in a Bind. At a glance, that’s exactly what it is: a visual novel about a gay protagonist, where your choices determine the direction the story takes.

But Inverness Nights isn’t a dating sim, it’s a break-up sim. You’re not choosing between different handsome suitors, or even toying around with rebounds in the midst of heartbreak. Instead, the game has you juggling the competing priorities of a recently-single gay man in 18th-century Scotland: trying to reconcile with your lover, focusing on work, and looking for a way to flee the city before you can be arrested for sodomy.

It can get pretty bleak, but it’s also a heartfelt, thoughtful game that cleverly plays with dating sim cliches. It also  finds plenty of opportunity for levity, chiefly through a dual-narrative structure. Tris, our heartbroken hero, is a tailor who takes on a job for a wealthy, mysterious woman called Shell; while he’s working, she recounts an Arabian Nights-inspired tale of swashbuckling adventure. Tris has his own secret, too: he’s an immortal with the power to heal wounds.

Each of these is an interesting element on its own, but it’s the way that they all come together that makes Inverness Nights one of the best games I’ve played this year. Without giving too much away, the dual storylines have much more than just a narrative purpose, and the fantasy twists are there as much for theme as for flavour. “Queer break up simulator” is an interesting enough premise, but Inverness Nights is so much more than that.

Curious about the inspiration behind this game, I reached out to Mackenzie, and they shared some fascinating insights into how Inverness Nights was conceived.

[There are mild spoilers for Inverness Nights in what follows.]

The seeds were sowed when the Canterbury earthquakes forced Mackenzie to move to Auckland, where they discovered the post-apocalyptic RPG NieR. “I relate to the fact that everyone in the game wants to keep their friends and families close, but with the world falling apart – communication, the landscape, so on – that’s impossible,” Mackenzie told me. “This made me interested in telling a story where the protagonist, like Nier [NieR’s protagonist], fails to recognise his problems fit into a larger counterpart narrative and that his myopia is preventing him from making meaningful connections with people.”

“Then in 2014 I broke up with my significant other of two years, and for lack of any queer friends to talk to, found myself lonely enough that I had to see a therapist to work through the emotional fallout. The two main points she hit on, after hearing about my situation, were that I had to actually reach out and find some queer people to be friends with so I wouldn’t go through that isolation again.”

“I realised that queer break-ups, because they almost always come with a mandate for privacy that straight break-ups don’t need, get weirdly compartmentalised in the aftermath. You mourn at 12pm, then you have your shift at 1pm where no-one can know, so you’d better deal with your emotions before you clock in. That was the main inspiration for the choice system being between Tris’ priorities – his private life vs his public life – and why looking for someone who can bridge the gap leads to the best ending.”

One of the things I find most interesting about Inverness Nights is the way it blends literalism and allegory to explore queer identity. The catalyst for the whole story is the threat of Tris being outed by a vindictive former lover, in a time and place where sodomy is punishable by death, and the game doesn’t pull its punches about how that impacts Tris and those around him. At the same, it uses fantasy to touch on more abstract ideas. As far as he knows, Tris is the only immortal in the world. That is, needless to say, an isolating place to be, so you can imagine the weight that’s lifted from his shoulders when he finds out that there are other immortals. Allegory can often be patronising and literalism can be oppressive, so it’s nice to play a game that finds a way to balance the two.

“Around when I started work, a friend of mine and I had a conversation about racist elves. She’d been playing a game with blue drow-inspired elves who’re discriminated against by the rest of the people in the setting, and as an Asian person, she was tired of the fact that if she wanted to be involved in a fantasy story her options were usually settling for allegorical representation or having her race be made a non-issue,” said Mackenzie.

“It was almost impossible to find any media where the challenges she faces as an Asian woman in a Western country were mentioned directly for her to relate to without becoming the focus and turning the narrative into a story about ‘anti-Asian racism in the West’, which wasn’t what she wanted at all. As a result, one of my conscious choices from the start of Inverness Nights was that while – as a fantasy of sorts – it’d be cool and thoughtful to make the magical elements reflective of queer identity and queer culture, I had to also make sure the meat of being queer was shown too.”

The character of Shell takes a similarly fantastical turn, though I don’t want to say too much because would ruin one of the biggest twists in Inverness Nights. I got the impression she was trans, but according to Mackenzie, that wasn’t really the intention.

“I wouldn’t say it was the intent, but as a non-binary person a lot of how I framed and wrote Shell made it inevitable,” they said. “I realise that you can’t really bring attention to [the twist scenario] without the implication of a trans narrative appearing, especially when written by an NB person – there was no way to write Shell that wouldn’t be read as a representation of that experience. In turn, I think because I’m writing from the perspective I’m writing from, I can’t honestly say ‘don’t read it that way’, because it is at least a little bit of what’s going on.”

The story that Inverness Nights tells is obviously the main appeal, but quality of the writing can’t be overstated. It’s flavourful and period-appropriate without being verbose or difficult to read, which is a difficult balance to strike. Unsurprisingly, this was the result of repeated edits and strict rules that Mackenzie placed on themself when writing; things like “Grammar must not read too modern, but must never be difficult for a modern audience to parse,” and “Every text box must reveal new information or be too critical to a scene’s pace to cut.” My personal favourite of Mackenzie’s writing rules: “Astor [the main villain] should use whatever words make them sound punchable.”

At one point, the script was over 90,000 words in total; by release, this had been cut back to 65,000. That’s still a lengthy piece of work, but the strict editing shows when not one of those words feels out of place.

Inverness Nights is currently available through the indie-centric storefront itch.io. Mackenzie’s hoping to bring it to Steam, but confusing processes mean that progress on that front is slow. “Steam Direct’s documentation doesn’t explain in detail what forms to file if you’re from countries outside the US, and without an accountant to ask for help, I’ve not been clear on where to begin,” they said. “Furthermore, my NZ developer friends who have games on Steam have largely avoided doing the paperwork themselves, so getting advice on that process has turned out to be difficult at best.”

Still, the lack of Steam support hasn’t stopped people from finding and playing Inverness Nights, and the response has been positive, particularly for Alasdair, Tris’ former lover. “I’ve been pleasantly surprised by how many people like Alasdair as a character. Early testing involved a few people saying they hated Alas, and that was the only metric on him I had for ages. I stuck with his character anyway because it wasn’t particularly important that people liked him as long as his perspective made sense… but here we are, he’s about par with Shell for fans. Good for him!”