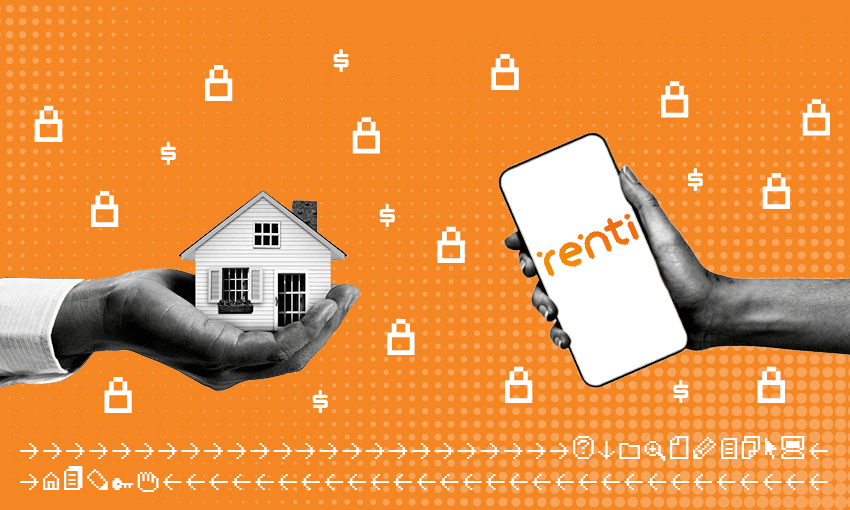 Services like Renti are meant to make things easier for landlords and tenants alike, but some worry renters are losing out as a result. Dylan Reeve explores for IRL.

Comedian and podcast raconteur Tim Batt is moving house. Such is the life of a renter. And, as part of the cursed process of applying for rental property in Aotearoa, Batt found himself completing a tenancy application form via Renti, an Auckland-based rental application management website.

A few steps into the process Batt was stopped in his tracks when Renti offered him the opportunity to upgrade to a “verified profile” for the low one-off price of $25. As a jaded millennial, resigned to forever being at the mercy of landlords, Batt naturally assumed the worst: that paying the fee would win preferential treatment. “Psychologically, you want to take any opportunity to get ahead of the pack, and this gives you the belief that somehow you’re getting in front of people to take the free option,” suggested Batt, with a hint of conspiratorial suspicion.

I'm being forced to use a third party to apply for a rental and it has a premium service option. For me. The renter. Which enables the lights to be on, on time.

This country, in many ways, is cooked as a chook. pic.twitter.com/npx1IZEEJ9

As with every aspect of our lives, home rental is increasingly becoming appified, with websites and apps being marketed to property managers to streamline their interactions with tenants. But is Batt’s suspicion about tenants being shaken down by software middlemen justified? And even if it isn’t, are these tech developments in the interests of tenants, or is it just another situation where the mismatched power dynamic of renting means they’re dragged along for the ride?

As for Batt’s concern about being at the bottom of the heap as a lowly free user, Will Alexander, Renti’s CEO, is very clear: no one is getting ahead of anyone else. “It’s an optional feature,” Alexander said flatly, before explaining that its main selling point is that it allows prospective tenants to pre-register a credit report and ID records. Usually, when a prospective tenant becomes the preferred applicant all the vetting still needs to be done, he explained. With Renti’s verified tier “it gives the tenant an opportunity to do it themselves”.

One advantage to tenants, according to Alexander, was the ability to avoid the need for multiple credit checks if an applicant ended up reaching the “preferred applicant” stage for multiple properties. “The more times you get a credit check done, it actually affects your credit score.”

While Alexander may frame the service as a benefit to tenants, others have been critical of the downsides. A November 2021 story from Stuff raised the issue of optional applicant fees on both Renti’s and Trade Me’s application platforms. Since that time, Trade Me has wrapped up their internal rental application process, choosing to partner with Renti for the feature going forward. But according to Renti’s Alexander, the optional fees are on their way out anyway.

“It’s 90% [likely] that it’s going to drop off because we can only collect so much information now,” said Alexander, referring to recent guidance from the privacy commissioner that will mean significant changes in the way rental applications have to be handled.

The changes that will likely see the paid option retired come after ongoing criticism about excessive data collection within the industry. Both Renti and its largest local rival, Tenancy Practice Services (TPS) who operate tenancy.co.nz and tenant.co.nz, have faced a shake-up from the privacy commissioner after ongoing complaints that they, and property managers generally, were collecting too much information from applicants. The new system, which both companies expect to roll out in March, will see the applications handled as a multi-step process, only collecting necessary information as applicants advance through their application.

Renti and TPS both handle only the first stage of the rental process, from viewing through to signing a rental agreement. After that, the rest of the rental relationship is handed over to whichever tools property managers and landlords are using to manage their properties.

Cameron Jenkins, of the Manawatu Tenants Union, sees some risks with the growth of technology in the rental market. “We’re dealing with a lot of digital poverty … it’s quite a big barrier,” said Jenkins, of sections of the population who don’t have access to necessary technology. “Older populations and rural sectors are a concern. You’ve got people who’ve lived out in the country all their lives and need to retire into the city, and they can’t because the services aren’t there and they don’t know how to use the internet.”

Jenkins added, however, that tech platforms can also offer clear benefits for tenants such as broader communication options and clearer record keeping, something that can be hugely beneficial if disputes arise later. “You use an app – the tenant has it, the landlord has it, communication is done via the app so it’s recorded as a formal document.”

One business focused on delivering a tenant-friendly services is Australian company Bricks and Agent, which offers a product that allows property managers, owners, tenants and tradespeople to connect in order to address maintenance issues in rental properties. “Tenants are busy and there’s younger people moving in all the time who aren’t used to having to sit on phone calls and send emails that don’t get responded to because agencies are too busy,” said co-founder Rafael Niesten. “They are used to that Uber-isation where, at 12:30 in the morning, they say, ‘Hey, I’ve got a leaking tap’ and they just want to put in that request and someone will deal with it.”

For property managers these tools offer benefits in record keeping and compliance, as well as efficiency. Like Jenkins, the companies argue that tenants also see benefits, thanks to a more streamlined relationship with their property manager and features like multi-platform interactions (tenants can log requests using SMS, WhatsApp, Facebook Messenger and more) and in-app translation.

But as every aspect of our lives seems to be subsumed into one app or another, is all this tech asking too much of tenants?

Tenant advocate Jenkins is optimistic about what technology brings, but warns about some being left behind. “For those who can [use technology] it’s going to be wonderful, but we also need to have the ability for those who can’t access technology to participate. It shouldn’t be a hindrance.”

“The technology works really well when done right, and when connected to other systems,” said Niesten. “Where it doesn’t work well is when you have a tenant who has to have seven mobile apps on their phone to do what they need to do.”

The growth of tenant-facing technology in the rental industry seems inevitable, as it is everywhere else. It still seems to be at an early stage and has the potential to make rental relationships better, but there is also the very real risk that we find ourselves in the technological hell of competing apps, technologies and platforms.

The overarching concern is who is going to benefit, and how. “I like technology,” Batt said, “but there’s such a huge power imbalance in rentals that I worry about how [tech] might make that worse.”