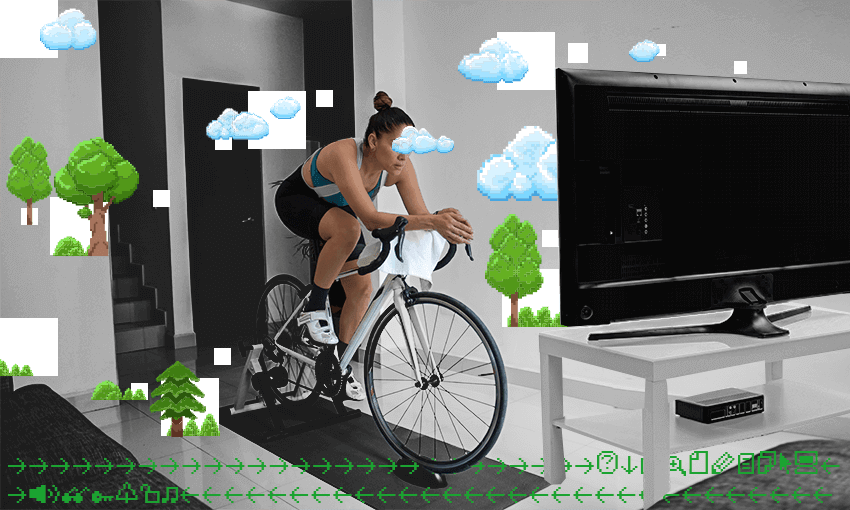 Josie Adams spent a week trying out Zwift’s metaverse for cyclists. She reports on the sweaty, euphoric, butt-bruised reality for IRL.

Most of us think of the metaverse as a promised land for nerdkind: it’s a place the Zuckerbergs and crypto bros of the world will be able to roam free, wearing Rick and Morty-themed avatars and investing in digital real estate. Yet so far the metaverses available seem, mostly, badly-rendered and purposeless.

But jocks have had their own metaverse for years, and it pops off. Since 2015, cyclists and runners have been able to explore virtual lands from the comfort of their own homes thanks to a company called Zwift. When the team behind it offered me a week inside the metaverse they call “Watopia”, I was keen. The opportunity to plunge myself into an up-and-running virtual world was too good to pass up.

But is an exercise-based metaverse the best first step to a brave new digital world? I spent a week cycling through the lands of Zwift, looking for a future I could get behind.

When you log into a popular metaverse like Decentraland it’s impossible to tell who is next to you and what they’re doing. The users there are Lego people with scene hairdos, listening to tinny drum’n’bass and getting hit by empty trams. On Zwift, everyone has their own names and national flags flying. They’re wearing high-vis cycling gear and all have a purpose: today we’re cycling through a volcano, baby.

The bike took some setting up – it’s a real bike, with the back wheel removed and replaced by the Wahoo kickr, a piece of tech that clings to your bike chain so it feels like you really are cycling up a mountain. The bike connects to your smart TV, so you can see your avatar cycling in real time. A thick neoprene mat is wedged between the bike and floor to prevent indents and catch all the sweat you’ll drip. “You’re going to need a bigger fan,” said Glenn, the very patient man Zwift sent to help me set up the kit. “Trust me on this.”

I, an athletic dunce, did not trust him on this. “It’s not like I’m gonna do the Tour de France,”  I said. “I’ll just open the window.” He shrugged, leaving me in a sweaty grave of my own construction.

I was lied to by spin class. I assumed that, just like gym exercycles, the Zwift bike would be easier to use than a road bike. It is not. It is, if anything, harder. The kickr does an incredible job of sucking on your pedals as soon as the course shows you going up a mountain.

It’s a realistic mountain, too – the volcano circuit in Watopia (the imaginary world inside Zwift) comes complete with glowing red lava walls. You can hear the wind and fellow riders – there have been as many as 45,000 people Zwifting at once – pushing past you. If you log on to the right course at the right time, one of these riders could be Olympic athlete Greg Henderson, who leads a New Zealand-based community ride on Zwift every Thursday. I spoke to him in anticipation of joining the platform.

“It doesn’t matter how many fans you’ve got going, or how cool the room is, you still sweat like crazy,” he told me. “You’re like, ‘oh man’, and you start getting frustrated that you’re sweating all over your nice bike.” Even if you clean it, he said, after a year or two your bike will start accumulating areas of rust.

He told Zwift about the problem he was having, and they sent him a high-tech Wahoo bike. “They’ve really gone next level,” he said. “They’ve now got a full-on whole bike that can’t be used outside, obviously, but it has all the buttons a normal road bike would for electronic gear shifting and things like that.”

“Now I can just destroy one of those and not one of my own nice bikes.”

While Watopia has invented plenty of immaculately-rendered environments to cycle through, some are based on real-world cycle trails. You can cycle the same paths in France, London and New York that professional athletes do. “I love riding up the Alps in Zwift,” said Henderson. “I’ve raced that a few times in the Tour de France in real life, and then to go and ride it again in a virtual world is quite good.”

While he doesn’t prefer it to the real-world version – he’d love to be in France right now – he likes how much more time-efficient the virtual version is. “I don’t have to be [climbing the Alps] for four or five hours like I did when I was professional,” he said. “So it’s probably my favorite course because I know I’m getting bang for buck, if you know what I mean.”

I have never done the Tour de France, and no amount of performance-enhancing drugs will allow me to do it, but I have done the Otago Rail Trail. I remembered this three kilometres into my first ride on Zwift (a short, easy course called “Fan Flats”), when it became a huge pain in the ass. The bike seat can only be described as “bony”, which is an easy fix with a seat pad. Unfortunately my ass itself is also bony, and my padded bike shorts (for comfort and thiccness) have sadly disappeared into the athletic gear ether. I tried putting a cushion on top of the seat pad but, like the princess and the pea, no matter how many layers were wedged between snatch and seat I was in agony.

When I woke up on Monday morning after a week of pounding the pedals it was hard to differentiate between the pain of gains and the pain of bruising.

If you have the right cushioning equipment, Zwifting would be a delightful experience. You can hear birds chirping, water running, and the gravel beneath your bike. But can you go hundy like in real life? Henderson said he hasn’t quite hit his real-life top speed on Zwift, but he’s come close. “I’ve done 130km an hour downhill in real life, but I’ve only done 110km an hour downhill on Zwift,” he said. “Maybe the hills aren’t deep enough. And when I hit my top speed, in real life when the tail hits you, the air’s a lot thinner, so you actually move a lot faster downhill.”

However, he said, the time trials on Zwift are pretty similar to those IRL. “If you’re going very, very hard trying to break away you’d be doing 47, 49km an hour. It’s pretty similar to what a good cyclist would do out on the road,” he said. “So it’s all very accurate in that sense.” I think I maxed out at 32km an hour on a sprint, and that lasted for a minute, tops. Zwift told me I burned 49 calories.

I used to complain about biking because it seemed too easy. It seemed like too little effort for the amount of distance travelled. Zwift has proved me wrong. When the virtual crowd cheers every time I pass a distance marker, I feel like a champion. I have earned this. In real life, the only attention cyclists get is from petrolheads screaming out their car windows.

Last weekend I went to Timezone and tried out the virtual reality rollercoaster. I nearly fell out of my chair because the vertigo it induced was so realistic. Entering the world of Zwift, I emerged drenched in sweat, with butt bruises, and developing great cardio health. These virtual realities focus on physical sensations, not ideology and investment like the current metaverse boom seems to be doing. The former, I think, is what most people looking for a virtual reality experience want.

This metaverse works because it’s not made for individual crypto-capitalists; it’s for a community. On Zwift, a bunch of New Zealanders spending their Thursday nights doing the Tour de France see the same Alps, hear the same crowds cheering, and log off with the same sense of achievement.

When I took the bike off its stand last night, chain grease got on my hands. This was probably a mistake, but it seemed symbolic: the metaverse, at last, is physical.