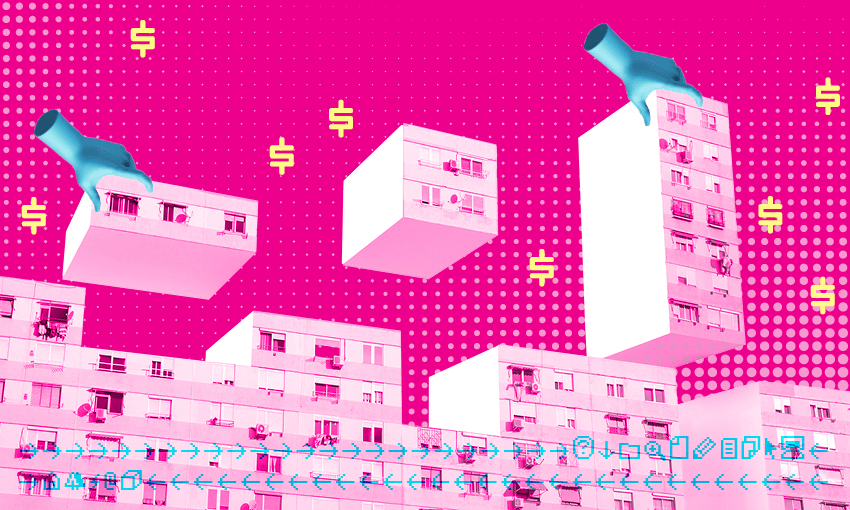 Priced out of the local housing market? Try moving online

As homeownership becomes a pipe dream for more and more people, some are turning their attention to virtual real estate. For IRL, Josie Adams investigates how to buy land in the metaverse.

Many of us have given up on the quarter-acre dream. The reasons why have been covered extensively. Homeownership has become such a nightmare that, for some, the dream has changed; a quarter-acre NFT is the next big thing. We are at the beginning of a new epoch, one where abject dystopias like those in The Matrix, Snow Crash and Surrogates seem like nice alternatives to renting forever and drowning penniless in the floods of changing climate.

We can choose to live out our horrible earth-bound fates, or we can spend our meagre life savings on a small patch of pixels online in the hope that one day we can send our minds to live there, like a shitty Sim, while our bodies are sustained in a Jucy snooze pod getting pumped full of Soylent.

That’s right, you can buy real estate in the metaverse. Not Zuckerberg’s – yet – but a large number of virtual worlds are springing up with virgin lands ripe for settlement. A small house in Upland’s version of Chicago will set you back only about $7. At the other end of the scale, a large estate in Decentraland was just bought for $4 million. So where, and what, can you buy? And what’s the point, anyway?

The graphics are about on par with Runescape, but this is the metaverse du jour. Investors are pouring money into places like Fashion Street, which true believers feel could be the equivalent of buying New York’s Fifth Avenue two hundred years ago.

Decentraland has been around since 2015, and its associated cryptocurrency – MANA – has been considered a sound investment (relative to most cryptocurrency) for a while. This year its price spiked 265% after Mark Zuckerberg announced a Facebook metaverse, proving people want in on this kind of technology, and they’re not going to wait around for Zuck to start renting his cyber meeting rooms.

Unfortunately, it might be too late for the plebians to get in on the ground floor. The cheapest plot of land I could find in the whole ‘verse cost NZ$15,000 (3,195 MANA). Here is a picture of it.

The Sandbox is an up-and-coming metaverse marketplace. The cheapest parcel of land currently for sale is going for just over 2 ETH, or $10,000. It was originally minted four months ago. Since then it’s changed hands four times. Interestingly, the price hasn’t shot up – it was originally sold for about $15,000.

You’ll notice these land parcels are sold on NFT marketplaces. This is because Web3 – a hot new version of the internet that lurks on the horizon – is a key part of why people are investing in the metaverse. The whole idea of Web3 is to take power back from big companies like Facebook and Google; people can own their own data and make their own purchases through the alleged wonders of blockchain technology.

Unfortunately, it’s hard for individuals to have power without money; and while $10,000 is much more affordable than a house in Wellington, it’s a big gamble for those of us living paycheque to paycheque. Especially when, you know, you can’t actually live there. Perhaps you could buy some SAND coin and hope the value spikes like MANA did.

This one has the coolest name, and is partially owned by Zuckerberg’s nemeses, the large and in charge Winklevossi. These two things alone are indicators of a bright future. You can buy a little 200 square-metre section (with workable building height limits) for just over $7,000. You could buy the body of Flipper the penguin to wear as you walk around your section for about $5,000. You can buy a whole “small world” to program and customise as you like for just $6,000.

Somnium is affordable compared to other metaverses, but appears to have just as much potential: it’s designed as a virtual-reality game, and doesn’t put on airs that it’s anything fancier. Finally, you can wear a headset and call yourself Flipper and run around a planet of your own design, just like all those dystopias promised.

Upland is an entry point into the world of virtual real estate – it’s not pretending to be anything other than a property trading game. You don’t even need a special crypto wallet to access it. Sign up and get 4,000 UPX (worth roughly one New Zealand dollar) just for joining. However, in order to buy anything you need to upgrade your visa from “visitor” to “uplander” – ie, have more than 10,000 UPX in the bank.

Upland, despite having extremely minimal function and graphics (it’s basically just a map), is more in line with what most people imagine the metaverse to be: it’s a replica of our own world. Unfortunately, the ability to digitally colonise new lands hasn’t yet spread outside of the US, so owning a home in Auckland is still unattainable.

You can use fiat currency to buy UPX in-game: 5,000 UPX for $7. Upland seems more targeted at collectors than those looking to buy an actual virtual home, or even build a virtual business, so unless you’re a very wealthy Monopoly enthusiast I would suggest you don’t spend real money on it.

One of the oldest metaverses is also among the most affordable. The past year’s hype around metaverses has largely been boosted by cryptocurrency fans; Second Life is too old-fashioned for them. And because you need to pay for membership to the world, you get some money and land to do with what you will. That’s right, for just US$11.99 a month you get a piece of land and a weekly stipend of L$300 – that’s Linden dollars, a currency you can only use inside Second Life.

If you’d like to expand your patch you can buy some land from your fellow users, too; the most expensive spot up for auction right now is a 1792 m² parcel, sitting at about $35.

We’re entering a new age of exploration, with virtual worlds on the cusp of transformation. So far we’ve turned them into exercise routes and office meeting rooms, in part because those buying up large tracts of the metaverse are investment companies looking to expand their own worlds instead of building a new one.

Not in Second Life, where there are multiple bars dedicated to furries and you can fight other players to death. If metaverses are truly meant for the masses, as an escape from an increasingly restrictive real world, this is the kind of place to invest in.