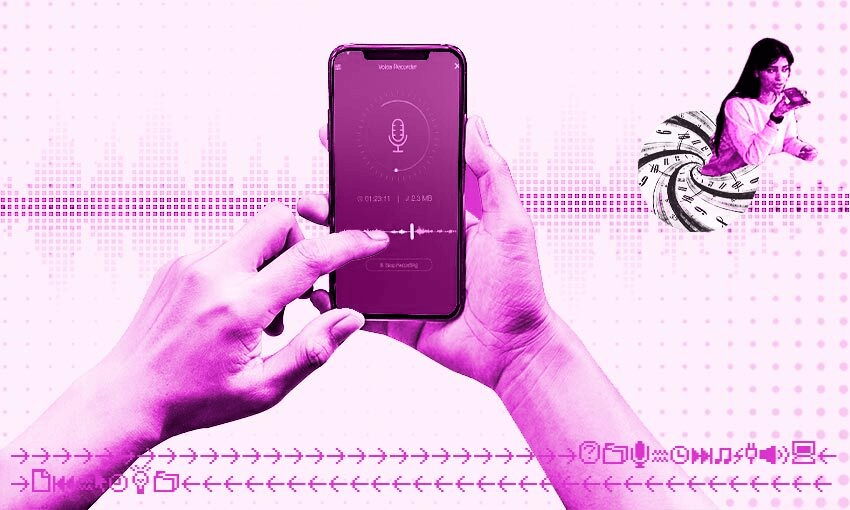 An ode to voice notes

Shanti Mathias used to find her mum’s audio messages annoying, but she’s grown to love the format. She explains why for IRL.

For years, part of me lived on the other side of the ocean. I woke in the room of my flat, the wallpaper peeling, the growl of buses outside, and ran to classes I was always a little bit late for. Twelve thousand kilometres away, it was the middle of the night in India, and the people I loved most were asleep.

Sometimes, I would switch my phone on in the morning, and see a voice note from my mother, carried through wireless networks and underwater cables knotting the sea between us. Perhaps it was a miracle of modern communication to receive my mother’s voice from so far away; the messages short, little glimpses of her days. But I didn’t like that I didn’t know what was in the message, if it was urgent or not, and that I couldn’t respond in real time. I didn’t know what a voice memo was supposed to be, and I told her to stop sending them. When I received any audio messages after that, they had a chastened tone: “I know you don’t like them, but I didn’t have time to write anything down …”

The form of the voice note is a strange one. The function is integrated with Facebook Messenger and WhatsApp, two of the main communication platforms globally, but their function is easily eschewed for Stories, calls, texts, or the many possibilities of emojis, gifs and stickers. A voice note isn’t visual, like sending photos or videos. It’s not easy to scan to figure out the important parts like with a text message. It doesn’t demand immediate attention like a voice or video call.

Despite these drawbacks, voice notes are a hit for some users. “I feel like you can express so much more warmth in a voice memo than you can in a written message,” says Maddie White, a New Zealander who moved to Germany last year. It was the distance from home that initially prompted her to start using the function. She started sending audio dispatches to a cousin who had also recently moved cities as an exercise in solidarity as the pandemic unfolded.

The form was infectious. “From there it spread to every chat I have,” White says. She was voice messaging her family, sending audio notes to friends. When she had an accident and ended up in hospital, she used audio recordings to tell distant loved ones what was happening and how she was going, since typing long messages was difficult.

Rachel Tovey, a student living in Te Whanganui-a-Tara, is also a fan of the voice note. “There’s more of an ability to hear your expression,” she says. “[Voice notes are good] when I’m in a bit of a rush, I have somewhere to be or I’m too lazy to send a text.” Tovey got into the habit of voice notes when she lived in Cambodia for several years. There, voice notes are one of the primary means of digital communication, as the 74 characters of the Khmer language make digital keyboards difficult. More than 50% of Facebook’s voice traffic comes from Cambodia alone.

It’s well known, at least on the internet, that millennials hate phone calls. A phone call, especially a social one, can feel unexpected, and living in a different timezone to the person you want to talk to exacerbates that. “I am one of those people who needs a warning before a call, so I find voice memos way nicer,” White says. “A phone call goes quite quickly, but in a voice memo you have time to process [information] then respond.”

Recorded speech is also a good option when you can’t read or type a text. “You can listen to a voice note in public without looking like a dickhead,” Tovey says. “It’s that perfect balance of being mobile – you can listen anywhere – but also getting the experience of really talking to the person.” On the other end of the phone, I can hear Tovey walking on a street with busy traffic. She pauses our conversation to give someone directions, and I listen to the cheerfulness in her voice. She’s right: the audio medium, even without any visual corollary, can reveal so much detail about a person’s surroundings.

Tovey mainly sends audio dispatches on Messenger, where she’s restricted by the platform – Facebook only allows notes up to a minute, which she hates – while White largely uses WhatsApp, which is the most common messaging platform in Germany. On the app, she can send long voice notes, up to twenty or thirty minutes, although she tries to batch them into smaller chunks.

“You have more trains of thought when you do a voice memo,” she says. “With writing [a text message] you really have to think about what you’re writing, [but] a voice memo lets you process in real time.” After our interview ends, White sends me a voice note expanding on this, explaining that emotion and humour translate well through voice even without the immediacy of a phone call, slotting easily into the rhythms of both sender and receiver.

Sending recorded audio is good for accessibility, too. For non-native English speakers “voice notes are an easier way to communicate because you can really make [your meaning] clear and you don’t need to worry about whether or not they’re literate in English,” Tovey says. Voice notes work well for people who have other accessibility requirements, like users of screen readers or people trying to avoid screen fatigue.

So perhaps my mum’s hurried audio dispatches to me were under-appreciated. This year, though, a dear friend was living in a different city as she recovered from a head injury. Screens were hard for her to focus on, but she started sending me clips of her talking, in her room, in her garden. I would pace around my house like a video game character waiting for further instructions, life paused in lockdown, and listen to ngā manu in a different city.

Voice notes made my friend feel closer. I could look up the book she was talking about while I listened and place a hold on it at the library; send replies to her early morning messages with my late night ones. The voice notes were architecture for a place we could be together, despite the distance. I sent her breathless dispatches with traffic in the background as I trotted somewhere, late again, folded laundry and chatted about my day, knowing sometimes that I was rambling, knowing always that my words would be received with love. There was a liveliness and intimacy to the medium that I hadn’t expected.

And suddenly I knew why my mother had been sending me voice notes amidst her busy, tangled life. There’s a space for a voice note, across time zones and packed schedules, carried onto trains or buses. I felt the sharp ache of making my mother send me texts when her hands were literally or metaphorically full. I sent my sister sleepy recordings to unpack a novel I’d just finished, and started talking to my mother too, just a minute or two. Enough time to feel like a conversation; enough voice to tuck in a pocket and carry into the world.

Were you an early viral star? Have you gone entirely off the grid before? Do you make your living in a novel way online? If you’ve got a great yarn about the internet, get in touch with us at irl@thespinoff.co.nz.