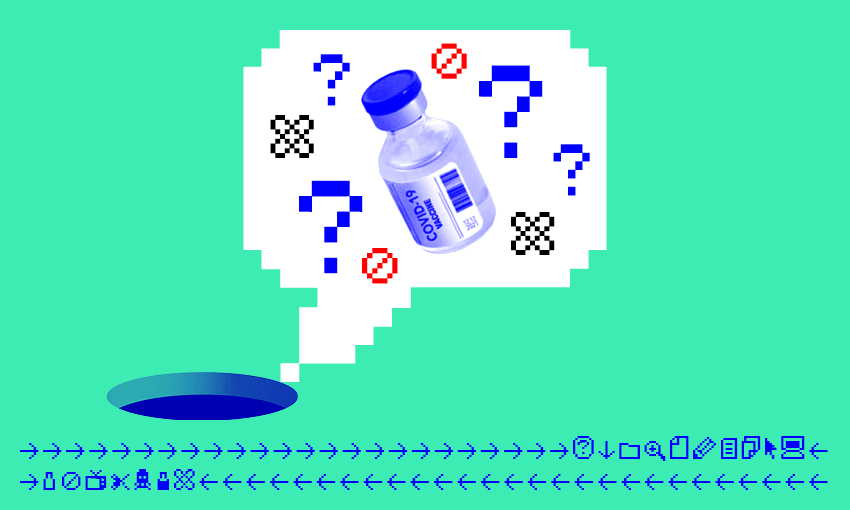 No, five kids didn’t collapse at a vaccination site. So who said they did?

Viral rumours about collapsed children at a Covid vaccination site spread quickly online, but where did they start? For IRL, Dylan Reeve finds that all roads lead back to one source.

As part of my role at IRL, and as a hobby even beforehand, I’ve spent a long time watching conspiracy theory groups and diving down strange online rabbit holes. Occasionally I spend a little time trying to get to the bottom of a claim.

Last Monday, as Covid vaccinations for the 5-11 year-old age group started, rumours began swirling within anti-vax and Covid denial groups that five children had collapsed at the North Shore drive-in vaccination site. Instead of calling ambulances, the vaccination centre staff told parents to drive their children to the hospital – or so the rumour went.

Health officials have unequivocally denied the claims. So how did this rumour even begin?

I’ve spent a while on Facebook, Telegram and other platforms frequented by conspiracy theorists and antivaxxers – I monitor more than 50 of these online channels – trying to get to the bottom of this claim. It was widely reported in those places as evidence of a conspiracy of silence between the government and the media, and in most cases, posts about the rumour were accompanied by one of two videos of former newsreader and journalist Liz Gunn confronting a 1News crew as they were departing the site; demanding they investigate the claim.

And, as far as I can see, that’s all there is to it: all roads lead back to Liz.

But, as with any claim within these groups, the story echoes out and back again, so while the very first stories included the video of Gunn chasing the news crew, there were soon versions of the story being shared from overseas groups. “Auckland pharmacy 5 children have collapsed,” said one post from an Australian group that was then widely forwarded around New Zealand groups.

Newshub journalist William Hewett, having seen Gunn’s video, reached out to her for more information or evidence. No useful details were forthcoming, only a long rant from which Newshub ran extended excerpts. (Liz Gunn didn’t respond to emailed questions about the sources of her claims for this story, and attempts to arrange a telephone interview on the subject were unsuccessful before publication.)

Another reply to Hewett was published on the website of FreeNZ, a group that opposes Covid-19 restrictions and is associated with Liz Gunn. It’s from this reply, attributed to FreeNZ staffer Onyx, that we get the closest thing yet to an actual source for the claims.

And that source is, still, Liz Gunn.

According to the response on the site: “What Liz Gunn went to the vaccination tent to do was to find out what was going on, from an independent media POV. Whilst there she had heard that there was the issue with some of the children in the cars.”

Gunn’s description was a little different when speaking on Counterspin, an online TV show. In that interview, she said “this buzz came up the line” from the protesters outside the vaccination event “saying that up to five had collapsed.” Gunn described this as happening immediately before her confrontation with the 1News crew, while she was at the far end of the road away from the event location.

In the written response on FreeNZ’s site, and also in a video Gunn posted on her Facebook later, she rejected the claim she was “spreading” the allegation, instead saying that she was just asking the news crew to investigate it. Regardless of Gunn’s intentions, though, the claim has since spread online, and I’m convinced the video of Gunn “just asking questions” is the key source: of more than 65 instances of the claim I encountered in these groups, all appear to refer back to Gunn’s video with none pre-dating it, and no independent evidence or sources for the claim are provided.

In the days since the North Shore drive-in event, there don’t appear to have been any developments that substantiate Gunn’s claims, either. None of the parents of the alleged five children have come forward to say they were sent off to hospital by centre staff; nor, to my knowledge, have any other people emerged claiming to have heard or witnessed anything like this at the event. On the other hand, people close to the event have denied Gunn’s version of events, with stadium CEO Brian Blake describing it as “a load of crap” in one Facebook comment.

And yet, days later, the claim is still echoing widely around conspiracy theory groups online, in New Zealand and internationally, like a circle of kids playing the whispers game.

Independently, I was able to locate the parent of one child, vaccinated at the North Shore site about an hour before Gunn’s encounter, who had a mild vasovagal syncope reaction immediately after vaccination – according to Cedars Sinai, a nonprofit academic healthcare organisation in the US, this is a fairly common reaction to stress, including blood draws or even the sight of a needle, and presents as light-headedness or fainting. It is not a reaction to the vaccine itself, just the stress of the situation.

The parent described to me, in a direct message conversation, the immediate support from on-site vaccination staff and said that their child recovered quickly with no other effects. They were not directed to hospital and no further care was required. It is possible that protesters outside the centre witnessed this from afar and amplified the story without context, including speculation about the seriousness and the number of children involved.

Asked for clarification, the Auckland DHB’s Northern Region Coordination Centre clinical director Dr Anthony Jordan said: “We do not have any reports of adverse reactions, including anyone fainting, at the drive-through centre at Eventfinda Stadium on Monday 17 January. If someone is feeling unwell after receiving their vaccination, or from any other medical issue, there are staff on hand to respond.”

Jordan also pointed out that many sites have on-site first aid staff that can recognise and treat any conditions that may arise. “If anyone needs more urgent medical attention, staff will call an ambulance,” he confirmed.

In another video, posted on Friday afternoon to the FreeNZ Facebook page and other social media channels, Liz Gunn interviewed an anonymous Christchurch couple who described witnessing a child vomiting outside an unnamed Christchurch East vaccination centre on Thursday before then seeing a second child suffering a violent seizure inside the venue.

The Canterbury DHB said that nothing of the sort had been reported. “We’ve spoken to vaccination teams and no-one has heard of anything like this happening,” a CDHB spokesperson told me by phone. Further to that, Dr Helen Skinner, the CDHB’s senior responsible officer for the Covid-19 response, told me by email that “Canterbury DHB has not received any reports of adverse events related to administering the paediatric vaccine”.

In that instance, it’s possible that these claims were in reference to an image that had been circulating widely on Telegram which appears to show a child collapsed on the street outside a Rangiora vaccination centre. The CDHB spokesperson confirmed to me that the event in question took place before a vaccine was given: “The incident you refer to is completely unrelated to the Covid-19 vaccine. To protect the privacy of the individual, we will not be providing further comment.”

As for Gunn’s claim that, in the initial video encounter, she just wanted the 1News crew to investigate the story, at no point in the recording does she offer them any details about a source they might speak to or witness they should contact; meaning there was very little of substance for journalists to actually investigate. I’ve been burrowed down this rabbit hole for the better part of a week now, and the one event I was able to identify bore little resemblance to the claims made by Gunn, and was absolutely not evidence of the vaccine-related harm that was widely suggested.

Are there any other strange internet mysteries or dubious claims you’d like IRL to get to the bottom of? Get in touch with us at irl@thespinoff.co.nz.

Phone addiction is often cast as a personal failing, but how much control do we really have?
By Josie Adams
Staff writer
14th April, 2022

Is it a game? Is it a book? With online interactive fiction, the answer is: yes

The internet is providing novel ways to tell stories where readers shape the outcome.
By Shanti Mathias
Staff Writer