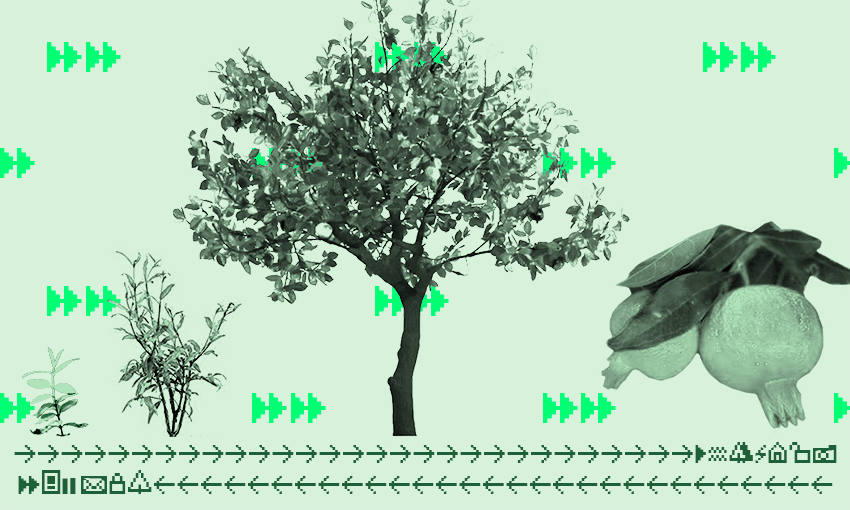 Kalem Berntsen, aka The Kiwi Grower, makes very popular YouTube videos about plants. For IRL, he tells Shanti Mathias how he grew an influencer career and why plant content is so hot right now.

I’ve always been interested in plants. I grew up in the Coromandel near the beach and forest which developed my passion for nature. I first got interested in succulents and cacti, realising how easy they were to propagate, taking a little leaf and growing a whole plant. And then my family built a wildlife pond, and I became interested in aquatic plants. As a teenager, I got into fruit trees and growing food, especially unusual and rare fruits.

I started making videos when I was 19. I was experimenting with growing things from seed, and I decided to try growing a coconut from a store-bought fruit. Surprisingly it worked, it sprouted, and I hadn’t seen any information about people documenting coconut growing online. The video unexpectedly became quite popular and helped me connect with other gardeners around the world. I decided to keep uploading other things I was growing. It didn’t feel that intentional, or like I had an end goal, it was just something fun to share what I was passionate about. I’ve always been a creative person.

My three most popular videos are one where I grow bottle gourds, one where I grow avocados from seed, and one where I take seeds from fruit I got at the supermarket and grow the plants. Those ones reached new people, and they started finding my old videos and watching them as well.

At the moment, the process of making a video is something like this. I’ll do some initial research and film throughout the process of growing the plants, capturing each stage of growth. The end result of the video will be a mixture of my observations and the things I learned along the way. I do feel a responsibility to ensure the information is accurate; I spend a lot of time researching to verify what I’m saying and sharing interesting, unique stuff about each plant.

Because I’m growing things, each video takes a long time to film, from three months to more than a year. We’re turning part of the property into a food forest, which means lots of biodiversity and planting in succession, lots of plants to keep an eye on. I start growing the plant and document the process with lots of updates. This means that I’m always working on lots of videos at once, so I can post consistently, which is quite difficult. It requires a lot of planning.

Working with plants can be quite unpredictable, not everything is a success. The final storyline of the video isn’t mapped out until the plant has finished growing. If something is a massive flop and I can’t make the video I’ve planned, I’ll try to incorporate it into another video, or an update on the food forest we’re growing on the property. I want to share inspirational stuff as well. Failure is part of gardening; I really want to show people that, so that they don’t feel bad if something doesn’t work out, and encourage them to give it another go. That’s what makes you a better gardener.

Then I have to post the video. There is a science to working with the algorithm, you’ve got to focus a lot on the title, thumbnail, and also keeping people interested the whole way through in order for YouTube to push it out to more people. For each video I’ll make ten or more titles and several different thumbnails before I settle on one, because I know how much of a difference a slight wording change can make to people’s decision to watch the video or not. I do sometimes have a sense that a video will do really well but I don’t always intend for something to go viral. I want to serve my existing audience as well, and sometimes I just make a video because it’s something I’m really passionate about.

Ironically, I definitely spend more time online than gardening at the moment. It’s a difficult balance to grapple with, because there is just so much time involved in running the YouTube channel, from the planning, the scripting, the editing, engaging with the audience, sponsorship deals, and that all takes a lot of time. Luckily my partner helps me in the garden, so between us we keep things going.

I took a big break from YouTube when I moved to the city and became a zookeeper. But when I came back five years later and restarted the channel people were still there. As I started to make new videos documenting turning two acres of bare grass into a thriving productive garden, I had a few comments saying that my early videos had inspired them to get into gardening, and now they were working in horticulture. It’s so mindblowing that the videos I made as a hobby had that impact on people. There’s so much positive feedback, most people are really great.

I’ve only really started treating the channel as full-time in the last six months, and it’s grown exponentially in that time. I do still have another job where I work two days a week but I’m training someone to replace me. This is my full-time business now! I feel so lucky that I can have a career doing something I’m passionate about and hopefully make a difference to people while also being able to support myself.

It’s kind of hard to wrap my head around the hundreds of thousands of people who watch my videos; I can’t imagine that many people. I do feel so lucky that people are interested in what I share, it’s pretty cool to connect with that many people.

Lots of people are living in cities and not connected to nature as much as they’d like to be. I think that’s part of why plant content is so big online. There’s almost an innate thing in humans to be pulled towards nature. There seems to be an extra spike of interest since the pandemic. For indoor plants, people have been spending more time inside and have wanted to create a space that they enjoy being in. Lots of my videos are about growing food, lots of people have seen the reliance that they have on supermarkets and supply chains, and seeing empty shelves has made them think. Growing your own food is a way to feel like you have more control and self reliance, more of a relationship with what you eat.

I have some videos coming up that I’m really excited about – one where I’m growing unusual fruits from around the world, like Australian finger lime, bitter gourds, and Austrian hulless pumpkin. Thinking more long-term, though, I’d really like my channel to be a go-to place for gardening inspiration and useful information that people can follow, covering as many fruits and edible plants as I can. But the thing that fulfils me the most is getting new people into gardening, showing them that it’s not something difficult or inaccessible, it’s something they can try for themselves.

Do you have a weird internet job? Met the love of your life in a strange way online? Gone off the grid completely? If you’ve got a great yarn about the internet impacting your life, get in touch with us at irl@thespinoff.co.nz.