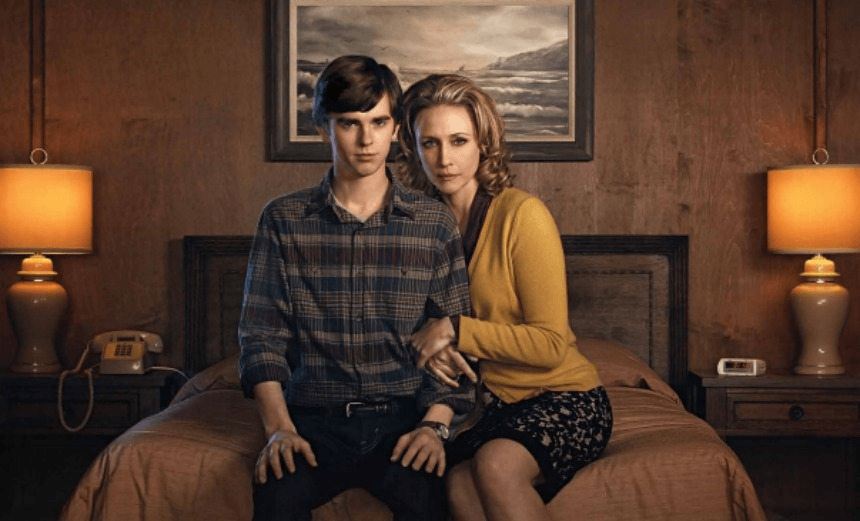 Good news: Business is thriving at the Bates Motel once again

For his Monitor column this week, Aaron Yap looks at the spectrum of Psycho reboots from the terrible ’80s sequels to the unhinged prequel series Bates Motel.

There’s a good chance Hitchcock might have balked if he heard what A&E had done to Norman Bates, the oedipally unhinged monster of his groundbreaking 1960 horror masterpiece Psycho. On first glance, the reimagining-cum-prequel series Bates Motel doesn’t look or feel like anything the Master would ever have created in his career.

Basically Norman: The High School Years, the show has a younger-demo-aiming vibe that’s one mopey teenager away from being Dawson’s Creek. But I’d like to think that the perverse side of Hitch would’ve appreciated the bait-and-switch the show has pulled. While operating under the glossy veneer of teen soap, Bates Motel journeys down some exceedingly dark, unpleasant avenues to map out the evolving psychopathic tendencies of its protagonist.

In 2013, when the movie-to-TV remake machine was still in its infancy, Bates Motel started out promising but uneven, simultaneously battling expectations of honouring a seminal classic and striving to capture the imagination of a younger audience not so wrapped up in film history to care. The latter definitely paid off: the show, the longest-surviving scripted series in the network’s history, has just been renewed for a fifth and final season. Having stuck with it for a while now, I can attest that it’s simply grown more confident over time in grafting familiar coming-of-age tropes (rebellion, first loves, social alienation) to its twisted psychodrama about the World’s Worst Mother and Son trying to survive each other long before the events of Psycho.

Bates Motel has a few problems worth mentioning. The influence of Twin Peaks is unmistakable, to the point where I can do without another show set in a sleepy, idyllic small town with an underbelly of sex, drugs and corruption. Because these subplots are only tangentially related to the show’s most compelling elements – Norman’s growth and relationship to his mum – they often feel padded out. Excise all the marijuana-farming of Norman’s estranged brother Dylan (Max Thieriot) and you’d have a more focused show. Other supporting characters – such as Norman’s cystic fibrosis-suffering best friend Emma (Olivia Cooke) – sometimes wander in and out of the picture like narrative dead weight. Luckily, these issues are not so crippling that they aren’t worth overcoming or tolerating to get to the very good stuff.

Next to Hugh Dancy and Mads Mikkelsen’s sublime work on Hannibal – the other shorter-lived horror prequel that first aired the same year as Bates Motel – the pairing of Freddie Highmore and Vera Farmiga as Norman and Norma Bates is TV’s greatest dysfunctional duet. Together they take Psycho’s iconic line, “a boy’s best friend is his mother” to previously uncharted emotional depths. Highmore’s casting is satisfyingly fiendish. For starters, he LOOKS the part; his deep brows, broad-shouldered lankiness and primly dressed demeanour make him a dead ringer for Anthony Perkins, the original Norman Bates. But more so, I also feel that the showrunners – Carlton Cuse, Kerry Ehrin, Anthony Cipriano – are gleefully playing off the idea that the once-cute kid from Charlie and the Chocolate Factory could degenerate into a raging, peephole-spying, homicidal taxidermy enthusiast.

I’ve long held the belief that Farmiga’s performance as Norma is the most entertaining, if not the best, by an actress currently on TV. Prior to this, Norma was last glimpsed in the living form of Olivia Hussey in the forgettable 1990 made-for-cable origin story Psycho IV: The Beginning. Hussey’s Norma wasn’t bad; she put a lot of crazy (albeit of a more sexualised sort) in the short amount of time she was on-screen, and it’s kind of fun seeing her yelling “You dirty little pig!” at Henry Thomas as young Norman.

But Farmiga’s version is something else. Her feverish high-wire act, careening from tender caregiver to pathologically domineering mother to fearless femme fatale-like schemer, is what keeps me returning to Bates Motel for more. She always teeters on the edge of outright campy lunacy, but finds subtle, graceful ways to rein herself back. Norma does monstrous things, but she’s not the monster – she’s only caring for one.

If Bates Motel successfully extended the legacy of Psycho to a millennial audience, a little-seen aborted attempt of the same name did absolutely nothing to jumpstart interest in the franchise back in 1987. Written and directed by Richard Rothstein (who later wrote the Van Damme/Lundgren sci-fi actioner Universal Soldier), Bates Motel ‘87 was conceived in the aftermath of Psycho III’s poor box office performance. It was a TV pilot intended to spawn a horror anthology series in the vein of Friday the 13th: The Series, but unfortunately no one tuned in. Perkins, who was not involved, called it “terrible”.

For a spin-off, this one spun so far off it barely resembled its source. It’s a fascinating curiosity, a perfect storm of howlingly bad ideas that’s essential viewing for Psycho completists. Instead of continuing the Norman Bates mythology of the previous films, Rothstein’s script introduces us to Alex West (Harold and Maude’s Bud Cort), a formerly disturbed kid who killed his abusive father in a dry cleaner (!). Whilst incarcerated in a mental asylum, Alex befriended Norman – with the full blessing of his psychiatrist. Apparently in those 27 years spent inside, Alex received valuable “wisdom” and “insight” from Norman, who’s seen only in black-and-white photos played by Perkins’ stunt double from Psycho II and III. They became such pals that Norman, who’s now dead, left him the keys to the Bates Motel.

Bates Motel ‘87 only features the slightest hints of the Psycho that we know. The Bates house on the hill, Norma’s rocking chair by the window. There are flashes of quasi-supernatural happenings: Could the grounds be haunted? Who is that figure dressed in black lurking around? To the disappointment of many a horror fan, it was more interested in drawing out the bizarre friendship between Alex and feisty fast food mascot Willie (future Tank Girl Lori Petty), who just happens to be hanging around in the Bates house.

A third of the way in, the pilot of Bates Motel ’87 morphs into another show completely. Alex and Willie are kept off-screen for an interminable time for a bewildering The Twilight Zone-esque detour where suicidal aerobics instructor Kerri Keane is being wooed by shy, depressed high schooler Jason Bateman. I don’t blame audiences for bailing on this, not even the show knew what the heck it was.

In the closing shot, as the camera cranes slowly back, Cort breaks the fourth wall – possibly a nod to Hitchcock’s original location tour teaser for Psycho. “Nobody ever said life was easy. Then nothing ever worth it ever is,” begins his cringe-inducing monologue. “But you know, I think with a little luck, we’re gonna do okay here. I think Norman would have liked that.” As fate would have it, Norman rolled in his grave, waiting nearly thirty years before his beloved motel would reopen under better management.

We have one DVD and one Blu-ray box set of ALL the Psycho movies to give away thanks to Madman Entertainment NZ. Email your name and address to skye@thespinoff.co.nz, with the subject line “Psycho” to win!

Put your feet up in a nice hotel room with Bates Motel, available below on Lightbox