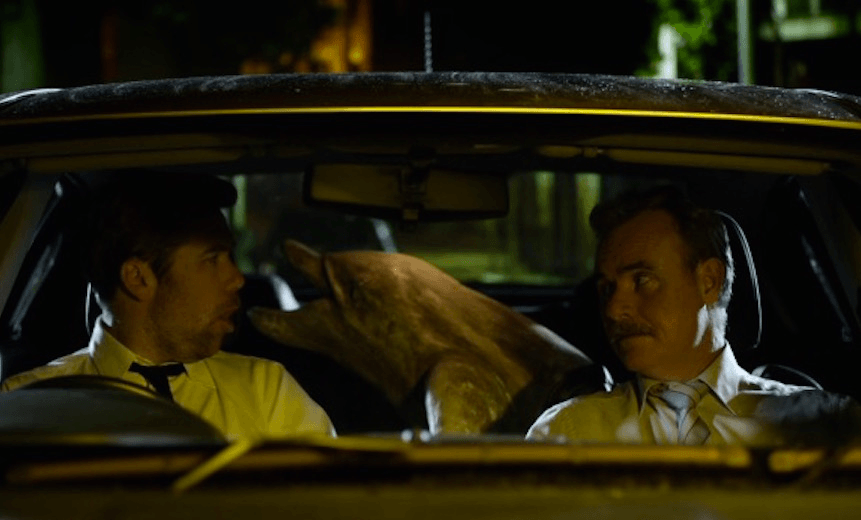 Alex Casey introduces No Activity, the brilliantly funny Australian cop show where nothing ever really happens.

Referred to as “the Seinfeld of cop shows” by The Sydney Morning Herald, No Activity plonks itself right down on the dashboard of a cop car during a series of painfully uneventful stakeouts. Watch policemen Hendy and Stokes whittle away hours on the very distant periphery of crime and danger, covering all sorts of important topics whilst being listened to by the bemused women in the control room.

Will they ever catch the criminals? Will there ever be a shoot out? Will they ever even leave the car? It’s impossible to say, there’s a lot of important turd talk to cover first.

I couldn’t help but be reminded throughout No Activity of early Ricky Gervais. Stay with me – I’m talking before all the militant atheism and his full metamorphisis into a real-life David Brent. His very successful podcast series, featuring The Office co-creator Stephen Merchant and their buffoon producer Karl Pilkington, was packed to the gills with endless waffle about “freaks”, disease, and absurd hypothetical scenarios. No Activity is drenched with that same delightful drivel, as the two men nut out some of the finer issues in life:

Many people will find this show exceptionally stupid, but it made me laugh so hard that it frightened my cats. Largely improvised, just working from Curb Your Enthusiasm-style plot outlines, the actors barb back and forth, disappearing down rabbit holes full of concrete dolphins and airplane toilets.

There’s a heartwarming reality to the ludicrous banality, capturing the sprawling, pointless conversations that everyone has every day of their lives. The pair talk over each other, they say words wrong, they overstep lines – just like we all do. It’s like mumblecore, minus all the sad and introspective stuff.

There’s Hendy as played by Patrick Brammall, who plays the (relatively) straight man of the pair:

Darren Gilshenan as Stokes, the cop who may or may not be capable of shooting down a man down whilst peeing

And the women in headsets Claire and April (played by Genevieve Morris and Harriet Dyer), whose discussions become positively (and literally) pornographic under the fluroscent lights of the dispatch centre.

No Activity can’t resist making fun of the uber-serious likes of True Detective in the opening credits. A similar gravelly voice sings tales of woe from the wrong side of the tracks, as the eagle eye camera pans over the pulsing arteries of the city streets. The joke here is that Hendy and Darren couldn’t be further from Matthew McConaughey’s po-faced universe pondering. I don’t remember Rust Cohle ever talking about turds on a plane. But the credits roll in, painting a sombre world full of seedy crimes and corrupt cops. Don’t fall for it for a second.

The entire first season is available to watch on Lightbox now, totally bingeable in less than 2 and a half hours. Pour yourself a coffee, grab a few donuts, and join a stakeout where nothing in particular is ever at stake.

Click below to watch No Activity exclusively on Lightbox