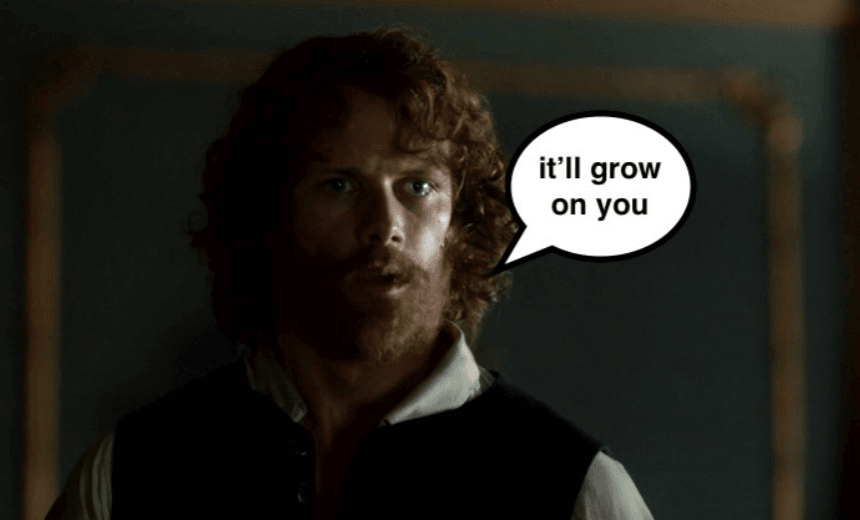 You had me at Vitamin C, and other thoughts on Outlander S02E07

This week’s Outlander offering had more tragedy than a Bee-Gees tribute karaoke party. It was a raw, emotional watch: Claire gave birth to a stillborn daughter, Fergus revealed he was abused by Black Jack Randall, and Jamie grew the strangest looking beard we’ve ever seen.

It was the episode of tears. Caitriona Balfe’s portrayal of the grieving Claire was so superb that everybody in Paris was ugly crying: the servants, the nuns, even Bouton the Pus-Finding Dog.  Jamie also bought us to tears, mostly because of the weird thing growing on his face. Apparently it was a beard, but I’m not 100% sure. Luckily Claire’s scheme to free Jamie from prison was successful; imagine how much worse it would be if he was still locked up.

It’s tough to make light of such a heavy, poignant episode. But if Jamie can do it with his facial hair, then so can I.

1) Flashforward: this is great for about five seconds

Welcome to 1950s America, a fantastical world of nail polish, eye liner, and cute-as-apple-pie children. Look, it’s Jamie and Claire’s future daughter, the one that Frank said he’d raise as his own!

If only this touching vision didn’t mean that Jamie was dead and Claire wasn’t trapped in the future, raising her child with a man she doesn’t love. Hey ho, that’s the cheery start to the episode we needed!

2) As if this nightmare wasn’t bad enough: where’s Dr McDreamy when you need him?

Imagine if this was the last face you ever saw? Terrifying.

Poor Mother Hildegard is the Bad News Nun. She’s stuck with the job of telling Claire that baby Faith died, that Jamie is missing, and that Claire may also die. But wait, did she mention she’s chums with Johann Sebastian Bach?

4) The sooner Jamie sticks another sword through Black Jack’s groin, the better

5) Yes, but you won’t believe half the shit I’ve got to tell you

6) Those bloody spoons have a lot to answer for

With Jamie locked up in the slammer, Claire is stuck in her own emotional prison with nothing but a set of silver baptism spoons for comfort. I’m worried this is spiraling into an eighteenth century version of Castaway, where Claire goes all Tom Hanks and spends years wandering through the house, alone and exhausted, deliriously screaming out “WILSOOON!”

Wait until Claire fixes her toothache with an iceskate – then I’ll really be a blubbering mess.

Jamie takes the Castaway metaphor and runs away with it. Way too far.

No wonder this man is King, for he knows what the people need: citrus fruit and hot chocolate. You had me at ‘vitamin C’, Louis. If eating fruit and sleeping with you for three seconds gets Jamie out of prison, then TAKE ME TO YOUR ORCHARD.

9) Now lie back and think of England

11) I pulled out your placenta, now you owe me big time

The ‘white witch’ malarkey came back to bite Claire on the arse. Who should she save from execution? Master Raymond, a peculiar little man with a crocodile hanging from his ceiling, or the Comte, a brooding grump who poisoned Claire and gave her the biggest dose of the shits since that time Mrs Fitz undercooked the chicken?

Tough choice, but Raymond is a sneaky little sausage. He snuck into the hospital to cleanse Claire’s uterus and frighten the fever away (like many Outlander plot lines, it pays not to think too hard about the details), and then abrakadabra alakazam, he poisoned the Comte BEFORE OUR VERY EYES.

13) Why hasn’t anyone mentioned Murtagh?

“Sweet as,” says McBeardy, “Just like when I gave myself to Randall to save yours”. This is the twisted Fraser equivalent of “I took out the rubbish, so you can do the dishes”. These two were made for each other.

See you in Scotland, Frasers.