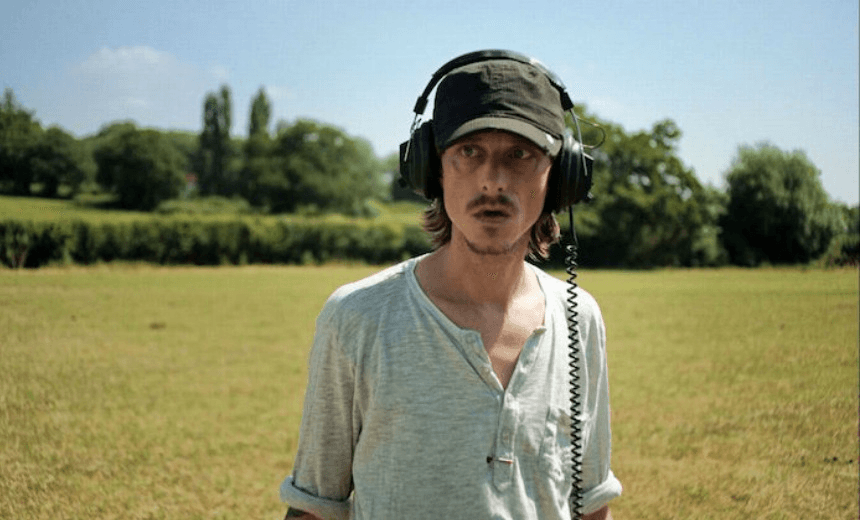 Aaron Yap digs up gold in Detectorists, the award winning comedy written by The Office’s Mackenzie Crook that went straight-to-DVD in New Zealand. We have several copies to give away, see the end of the piece for more details.

The fact that last year Detectorists completely slipped the radars of local TV (broadcast and otherwise) is prime evidence that – even in these times of finger-on-the-pulse peak-TV curation – pedigree-rich, awards-anointed shows can still fall through the cracks. Somewhat fittingly, Detectorists made its New Zealand debut this month via the much-maligned DVD format, like a forgotten, out-of-time artifact excavated by the show’s protagonists .

This bucolic charmer is by no means obscure. It picked up the award for Best Scripted Comedy at the 2015 BAFTAS and was a ratings smash for BBC Four. It’s written and directed by The Office’s Mackenzie Crook, who also stars alongside Toby Jones (Captain America, Tinker Tailor Soldier Spy), one of Britain’s finest character actors.

Perhaps it’s been overlooked due to its low-key nature: it’s devoid of the noisy, hashtag-ready sensationalism so often required of modern TV. In his ode to outsider hobbyists, Crook finds beauty in the everyday, a miniaturist quality reflected in the narrative economy of the show’s six episodes. His writing is understated, trimmed of bloat, but imbued with enough colour and depth that you feel like you’ve lived this tiny corner of the world by the end of the season.

The Detectorists are oddballs operating on the margins of mainstream society: Andy (Crook), an archaeology student/part-time cleaner, and Lance (Jones), a forklift operator. They spend their downtime roaming the paddocks of North Essex, hoping to unearth treasure but more likely to dig up copper nails, ring pulls and matchbox cars.

But however weird they are, we’re never encouraged to feel above them. At no point does the show succumb to the LOL-these-guys-are-so-goofy tenor that infects so much quirky indie fare. It’s essentially a love story between two men – I’d call it a bromance if it didn’t feel so cheap.

The pride and seriousness with which they approach their hobby is endearing. For Andy and Lance, it’s not just a matter of heading out into the field with a metal detector. It’s the entire process: conducting research, securing permissions, using the best equipment, gathering with their Danebury Metal Detecting Club members – all seven of them – to discuss findings. A running gag has the pair quick to correct, as if to legitimise themselves, anyone who refers to them as metal detectors. They’re detectoRISTS.

As a writer, Crook introduces just enough plot to ease the show along without clogging up its gentle, relaxed pace. A farm belonging to an eccentric old man (the delightfully batty David Sterne) becomes the location of a territorial war with rival detectorists who are after gold thought be buried there by an ancient East Saxon king. Andy and Lance’s tight bond is thrown off course when inquisitive uni student Sophie (Aimee-Ffion Edwards) muscles in on their friendship. The latter also tests Andy’s relationship with long-term schoolteacher girlfriend Becky (Rachael Stirling), whose patience towards his busy schedule with Lance is already thinning.

Detectorists isn’t a laugh-out-loud show. It’s bone-dry, punctuated by character-driven humour that sneaks up on the viewer. The punchlines land hardest when you least expect, such as the seemingly throwaway scene when Andy and Lance are offered lemonade by DMDC president Terry’s (Gerard Horan) airheaded wife.

Things do get pretty cringey in places, particularly with anything involving Lance’s ex-wife Maggie (Lucy Benjamin), a crystal shop owner who continues to abuse Lance’s kindness, knowing very well that he’s still pining for her. It’s hard not to squirm at Lance dropping everything just to drive Maggie’s mum home from Bingo.

The show’s blend of rib-tickling comedy and wistful melancholia hits its loveliest point halfway into the season. Lance, painfully setting out to win back Maggie’s affections, convinces Andy to get “the band” back together (it’s just the two of them) for an open mic night. He’s written a new tune for her called “New Age Girl”, but he can’t perform it standing up because he’s been practising sitting down. Jones does tremendously moving work here; watching Lance strum a mandolin lonesomely on his living room floor is adorably pathetic in all the right ways.

This subplot pays off with a great visual gag I won’t reveal but it’s the sort of subtle comic brilliance Crook excels at. And I love how he avoids turning the duo’s final performance into a source of mishap. Sure, they’re a little sloppy around the edges, lacking the slickly honed professionalism of the preceding act (Johnny Flynn, who also provides the show’s gorgeous folky theme). But the performance is so irresistibly sincere, it receives an enthusiastic response from their visibly impressed fellow detectorists watching on. The moment is an affecting gesture, a perfect example of the great, big, beaming heart that beats under the show’s unassuming veneer.

Characterised by a warm, bewitching sense of place, Detectorists is an exquisitely droll portrait of social misfits on a quest to claim that patch of Earth they can call their own. It’s remarkable for being, and championing the unremarkable.

Metal detectors down, we have several copies of Detectorists to give away on DVD thanks to Madman. To enter, send an email with your name, address and phone number under the subject heading ‘Detectorists’ to alex@thespinoff.co.nz

Never forget Mackenzie Crook’s iconic role as legend and kung-fu master Gareth Keenan in The Office, click below to watch the full series on Lightbox