Carrick Graham has made a full apology for defaming a trio of academics in hit pieces on Cameron Slater’s Whale Oil blog, in order to settle court proceedings. Alex Braae reports.

One of the last chapters of Nicky Hager’s Dirty Politics book has been closed, with PR man Carrick Graham admitting to and apologising for defaming public health academics for money.

The plaintiffs alleged that the articles were written on behalf of the NZ Food and Grocery Council, and aimed to smear the reputations of the academics in order to discredit their research. Slater was paid thousands of dollars a month by Graham.

In a statement after the apology was made by Graham, the Food and Grocery Council strongly denied having paid to have stories placed on Whaleoil.

“NZFGC wishes to reiterate it did not pay anyone to write any stories on its behalf on Whale Oil, or any other publication. Nor was NZFGC otherwise involved in any such stories. This was made abundantly clear to Professor Sellman, Professor Swinburn and Mr Bradbrook throughout the Court process,” said a spokesperson.

The FGC, which comprises industry lobbyists who often advocate on behalf of the alcohol business, had previously opted to settle with the academics before this trial began. Slater meanwhile had indicated he had “consented to judgment” , and was not in court today.

Opening arguments started today in the socially distanced Auckland High Court, but the court was adjourned for discussions to take place between the parties. After a lengthy break, Graham’s lawyer Chris Patterson returned to read the public apology.

“Mr Graham made various defamatory comments about the plaintiffs using various pseudonyms on blogs published on Mr Slater’s Whale Oil website. He encouraged, inspired and contributed to the text of certain defamatory blog posts about the plaintiffs that were published on Whale Oil, including making payments to Cameron Slater,” Patterson told the court.

“Mr Graham did so as part of his business, and in order to advance the interests of industry. Mr Graham apologises for the hurt and harm caused to the plaintiffs by these blog posts and comments.”

Patterson said his client was “now aware that a number of statements that he made about the plaintiffs were untrue, unfair, offensive, insulting and defamatory. Mr Graham acknowledges the plaintiffs’ work on the harms of tobacco, alcohol and processed food and beverages was undertaken responsibly, and in the public interest.” 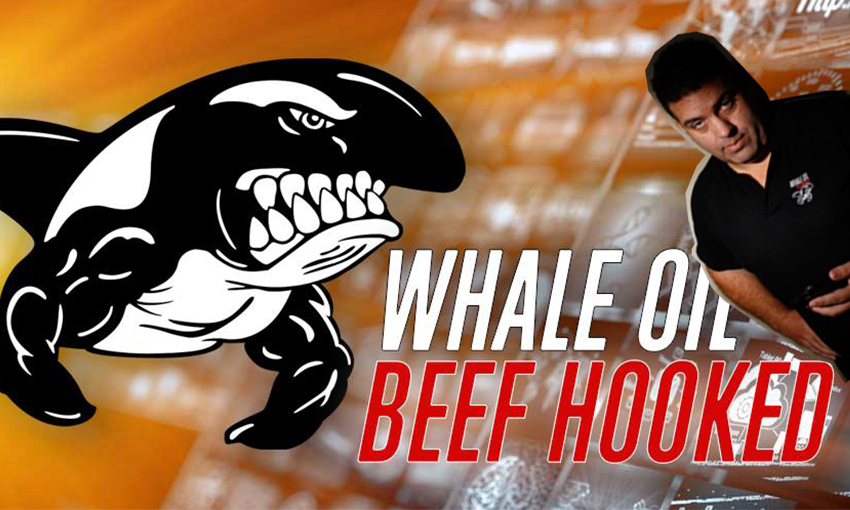 The apology draws a line under almost five years of legal disputes over the blog posts, and the settlement will include an undisclosed payment.

The academics said the resolution came as a relief.

“To be accused of being a fraudster and associated with terrorism, as I was by the dirty PR campaign orchestrated by Graham, who at that time was working for big tobacco, and published by Cameron Slater, was a terrible burden on me and my whānau for too many years. It’s a great feeling to have a burden like that off your back,” said Shane Bradbrook in a statement.

Doug Sellman said there were bigger principles at stake than just the reputations of the academics themselves. “The exposure of these dirty PR tactics clears the way for all our colleagues who are advocating for strong public health policies to do so without fear of being abused and defamed in the media.

“We didn’t fight this historic case all these years just for ourselves – there are bigger principles at stake here.”

Boyd Swinburn said the case showed “that the dirty tactics employed overseas by the tobacco, alcohol and processed food industries happen in New Zealand. These industries have successfully stalled public health policies for far too long in this country because they have deep pockets, powerful lobbying influence over government and very few scruples.”

The alleged connection between Graham, the Food and Grocery Council and Slater first came to light in the book Dirty Politics, released in 2014. While much of the attention in the immediate aftermath of the book’s release was focused on Slater’s connections to leading National Party figures, this element has proven to be more legally actionable. Several figures in this case also have strong connections to the National Party. The Food and Grocery Council chair Katherine Rich is a former MP, Graham is the son of former cabinet minister Sir Douglas Graham, and Slater is the son of former party president John Slater.

The Whale Oil website no longer exists, having been taken over as part of a legal dispute between Slater and businessman Matt Blomfield. Much of the content was lifted wholesale and rehoused on The BFD, which to this day publishes a near-identical slate of articles. Slater himself has had widely documented financial and health problems in recent years.

The case against him remains unresolved for now, as does the question of Graham’s invoices to British American Tobacco. The academics’ request for their provision under discovery had been rejected by the parties, and the academics’ counsel continue to insist they are germane to the case.

The defence had previously sought to block The Spinoff from reporting on the trial, on the grounds that Swinburn has written for the site in the past, and The Spinoff has had commercial arrangements with the University of Otago.

Those arguments were dismissed by Justice Tracey Walker.

“I reject the suggestion of implicit or explicit bias on the part of The Spinoff by dint of a commercial relationship. First, the mere publication of op-ed pieces by one of the plaintiffs in the past is of no moment. Secondly, there is nothing in the material presented to me which suggests that being a sponsor of media influences news reporting on that platform,” she ruled.

“I accept that sponsorship is the underlying reality of media funding in today’s environment and is analogous to advertising in the analogue media environment. The Spinoff is subject to the same fairness and balanced reporting imperatives as other media. I treat its application in the same vein as the applications by other media.”

By joining The Spinoff Members, you’re helping us do journalism and cover the news. To support the ongoing work, please donate here.