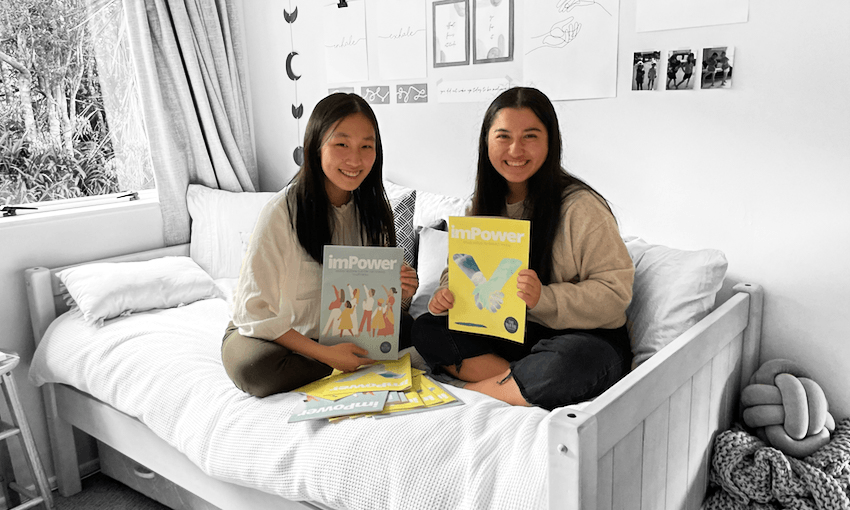 Rachel Zhou and Angelina Del Favero were just 14 when they started publishing imPower magazine. The first two editions – focusing on family harm and modern slavery – were sent to every secondary school in the country. Now 17, they’re working on a third.

It was the end project of a year 10 programme at Queen Margaret College that created the beginnings of imPower Magazine. Angie del Favero and Rachel Zhou were 14 years old at the time, studying at the private Wellington girls’ school when they were tasked with doing something that would give back to their community.

“Some people did beach cleanups, another person in our class created a video teaching people how to make reusable bags,” says Zhou. After a discussion with del Favero’s mum, who was working as a statistician with ACC at the time, the pair decided they wanted their project to shine a light on New Zealand’s dismal family harm statistics.

imPower: Your guide to family harm was released in 2018 and with sponsorship from ACC and Fuji Xerox, the pair were able to print over 2,000 copies, distributing them to every secondary school in New Zealand.

Before getting to print, they had to hustle hard to make their magazine look like something they would pick up. They took inspiration from Australian-owned Frankie Magazine, which uses pastel colours and simple designs to attract younger audiences.

Initial designs were created by a contractor they hired on Fiverr, an online freelance marketplace, but they weren’t happy with the “girly, young” vibe they’d been given, so the pair designed it themselves.

“I downloaded InDesign and taught myself, Rachel did the cover art and we designed it all and now we have that InDesign experience.”

The second edition of imPower was about human trafficking and modern slavery, a topic they became passionate about after attending a talk held by The No Project, a global anti-slavery campaign. The pair enlisted the help of their friends Charlotte Gee and Zoe Morrison Gardner for the 30-page publication. This time, sponsorship was harder to come by, and the pair say they approached “a ton of random businesses” trying to get funding to print and distribute the second magazine.

“It was quite a long email… We told them about the success of our first magazine and how passionate we were about what was to come in the upcoming magazine,” says del Favero.

The shift from a topic surrounding New Zealand statistics of family harm to modern slavery and human trafficking – a far more global topic – was not an intentional one at the time, but del Favero and Zhou say it is in line with their plans to make the third magazine a more international affair.

“We didn’t realise how bad [human trafficking and modern slavery] was and we thought that would mean people around New Zealand and the world wouldn’t know too. I think that’s what sparked our idea to create that magazine – but it fits with our aim to slowly create more global magazines.”

Inspired by brands like Frankie Magazine and Instagram account Shit You Should Care About, the duo think their strength comes from their proximity to the target audience. Their writing reflects how they talk with peers – it’s straight to the point with facts and figures bolded and obvious. Del Favero says this is how her generation best consumes the media.

“It’s all very to the point and clear, we don’t like reading through a really long document that takes ages to get to the point. I think our generation really appreciates something that’s simple and looks nice and I think that’s a similarity between that platform and our magazine.”

They both want to study medicine when they leave high school next year, but have no doubts that the magazine will continue, as a side project to their full-time study.

“What we’ve done so far has been so enjoyable and fulfilling so I don’t think either of us can imagine not doing it,” says del Favero. “We might not be at the same uni but it’s something we can do online and we know our roles and are very much in the groove of it now which makes it a lot easier.”