Middle-earth has had a good run in New Zealand. But we need to move on, argues Oscar Francis.

For more than 20 years now, the screen evolutions of JRR Tolkien’s Middle-earth have reached deep into the New Zealand culture, economy, and even our House of Representatives. And it shows no sign of abating, with Stuart Nash delightedly revealing recently that Amazon is getting an extra 5% on top of the usual 20% screen production grant to film the Lord of the Rings prequel series in New Zealand, bringing its rebate on a $650 million spend to well over $100 million.

The minister’s accolades didn’t extend to congratulating Amazon for playing jurisdictions off against each other and breaking new ground in coercive micromanagement, but he did say the project looked “fantastic”.

The real fantasy, however, is thinking that continuing to tie New Zealand’s image to a colonial dream sketched out a century ago is a good idea. If Aotearoa is serious about creating a future that young people can see themselves in, it’s time to divest from a very peculiar, and often overlooked fossil fuel: hobbits. 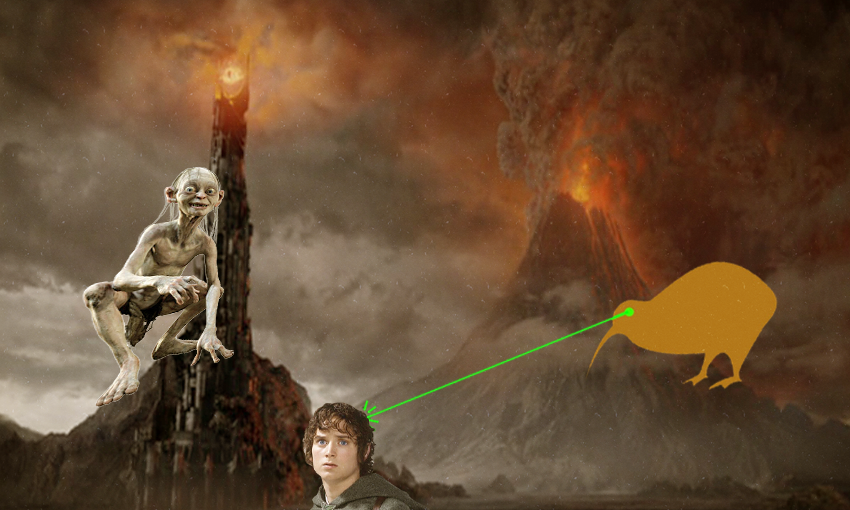 The problem with The Lord of the Rings is that it encourages us to identify ourselves with an idealised image of parochial bliss under threat from an irreconcilable, overwhelming evil.

It was the ugly mechanised horrors of the Somme, and the rapidly changing post-war social milieu, which drove Tolkien to retreat into the nostalgia of Middle-earth. But this fantasy world in so many ways reproduced the core problems of the world Tolkien might have tried to critique. In the end, The Lord of the Rings collapses the complexities of war and social change into a simple narrative, where good and evil are always clearly defined and heroic, and self-sacrificing dudes always save the day.

Tolkein’s universe delivers saviour-heroes in droves. Unfortunately, they’re all of a specific type — think war profiteers who believe they’re reincarnated kings here to fulfil a mythical destiny to save civilisation. Famed anti-union activist Jeff Bezos wants to have  a space colony to save humanity from ourselves, conveniently eliding suspicions that he is contributing to its end: the agreement between the government and Amazon apparently fails to take into account either the environmental costs of the increased number of long haul flights that are one of the predominant economic rationale for the deal, or the environmental costs of the production itself. Amazon will instead explore what looks like a token environmental project with Tourism New Zealand, and potentially even send a delegation of “subject matter experts” to give a talk on sustainability. Hold on to your seats.

The pastoral throwback LoTR offers is a world that is diverse, yet rigidly separated. Each society is shown to have an eternally stable politics arising from their ethnic isolation — it is only when mischievous outsiders show up (or their borders are permeated by some disembodied essence of evil) that the turmoil begins. The solution in this case is always to return things to the way they were. Beginnings never have to be interrogated.

Tolkien’s text would have us identify with the various symbols of volkish whiteness through the orientalisation of Saruman’s Orcs, depicted as an amorphous mass of torturing, snarling, cannibals who threaten to destroy the “civilised”.

This process of equating European-whiteness with “good” is ham-fisted in both the films and the books. What about a scenes from the perspective of an Orc! Why are they denied language in the books when Tolkien has a whole Wikipedia page devoted to languages he made up? We’re forced see hobbits as the good side even when they’re ruthlessly destroying the sentient trees surrounding Buckland for daring to mess with the hobbits’ hedge because they’re allowed to communicate in common with the reader. While the trees might have a language, they can only talk to each other.

This theme of environmental destruction weirdly mirrors the later association of the LoTR films with the Central Otago landscape, where the fate of the forests was sealed by the commodification of the land and the introduction of livestock by European settlers. The history of this process is obscured by the association of the landscape with Middle-earth. And the overlay of “100% Pure New Zealand” invites a wider set of resonances.

The combination of a controversial mega-corporation from the United States with an outdated yarn from early 20th-century England makes for a terrible cultural launch-pad in Aotearoa 2021. We need our own, indigenous stories. We need a clean break from Middle-earth. And never forget this: bureaucrats chasing nebulous promises of movie cash has always been cringe.

Aotearoa is not Middle-earth

In pursuit of 90%, we must leave no one behind