We’re selling original art from some of New Zealand’s top artists and illustrators to raise money for a great cause.

Browse the artwork and other merch at The Spinoff Shop now.

Two artists. Two drawings. One good long conversation. It was a simple idea, and one we were lucky enough to get to make into the video series Two Sketches last year. Today we’re putting the artworks created to good use, raising money for Māpura Studios.

Māpura is a creative space not far from The Spinoff office in Auckland that provides art therapy programmes for people living with disability and diversity. We’re big fans of what they do, and would love it if the art that was created for Two Sketches could find new homes and help support an organisation doing amazing work in our community.

Over the course of the series we collected artworks by some of my favourite cartoonists, illustrators, artists and comic artists, and while we talked I drew a few things too. Looking back over these artworks reminds me of how special Two Sketches was to make – all the artists were so generous with their time and energy. If you’d like to know more about the artworks for sale, let’s take a quick look back over the episodes.

In the first episode we talked to comic artist, professional wrestler and Tekken champ Michel Mulipola about Pasifika in wrestling, his journey in comics and being a role model to young Pasifika artists. While we talked, I drew my childhood favourite wrestlers – New Zealand’s own WWF tag team The Bushwhackers. Michel did a colour portrait of King, the character he plays in Tekken.

In episode two we visited the home of Sharon Murdoch, Stuff political cartoonist and three-time winner of Cartoonist of the Year at the NZ Media Awards. We talked about political cartooning, whether PC culture was killing comedy (it’s not!) and her experiences being a woman in the media. In this episode we introduced a new dynamic where each artist suggested something for the other to draw. I challenged Sharon to include her dog Iris in her image, and she produced a beautiful sketch of Iris hanging out with her crossword-loving cat character Munro. For my illustration, Sharon knew I hate drawing horses and love to draw Simon Bridges – so she challenged me to draw Simon Bridges as a centaur.

Next we visited queer trans comic artist and activist Sam Orchard, and spoke about representation in comics, his experience of presenting his own story in comic form as well as other trans and queer experiences, Lego, and his project ‘We Are Beneficaries’. I challenged Sam to include his home at the time – Point Chev – in his drawing, so he drew his take on a Point Chev pride parade. In response, he challenged me to imagine a straight pride parade and draw that.

In the fourth episode we travelled to Dunedin to meet former Green Party co-leader and now practicing artist Metiria Turei, where we discussed her anarchist roots, career in parliament and new life as an artist. She challenged me to draw an old lady superhero, so I drew my gran, Pamela Morris. Rather than draw, Metiria wanted to stitch and chat. In response to my old lady superhero she stitched a one-of-a-kind work of art – seriously, you need to see for yourself. 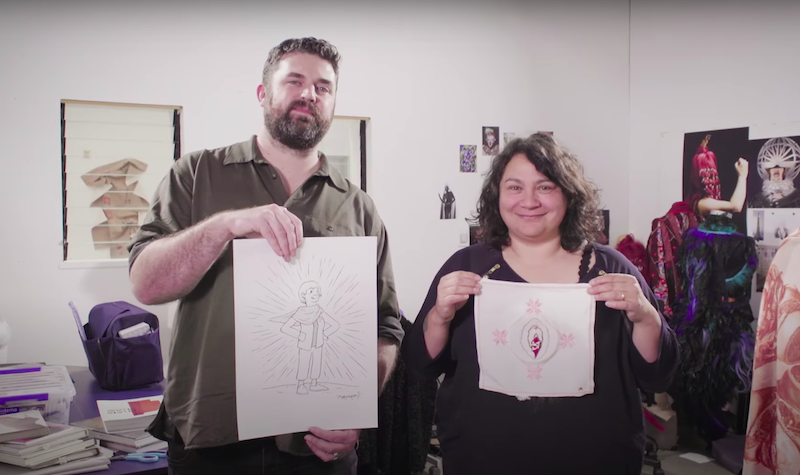 Staying in Dunedin, we next visited comic artist Ben Stenbeck, known for his artwork on books in the Hellboy universe. We talked about his journey into working as a professional comic artist, creating work for an American market all the way from Dunedin and imposter syndrome. Given his penchant for creating monsters I challenged him to draw a Dunedin-themed creature, and he in turn challenged me to draw a zombie.

Next we met legendary illustrator, painter, writer and comic artist Bob Kerr. His creation Terry Teo was a childhood favourite of mine so we talked about that, his process, and how he balances the world of fine art and kids books. I was busting to try my own version of how I’d  draw Terry Teo, so I did that, and Bob made a watercolour sketch portrait of me.

For the seventh episode we were back at my house, where I spoke to comedian Angella Dravid about her experiences in prison and how she translated that into comedy, and we both challenged each other to draw something we’re scared of. I drew myself attempting stand-up comedy. Angella, in her usual deadpan subversive format breaking way, drew a blank page with a cursor that she finished in the first minute of the interview.

So there you have it. Take a look and maybe talk yourself into buying some absolute one-of-a-kind original artworks that you’ll never find anywhere else, each with a great story to go along with them, and supporting a great organisation.

Thanks again to all the artists we spoke to in the series, all the crew that worked on it, The Spinoff and NZ on Air for their support, and everyone who watched and supported the show too.