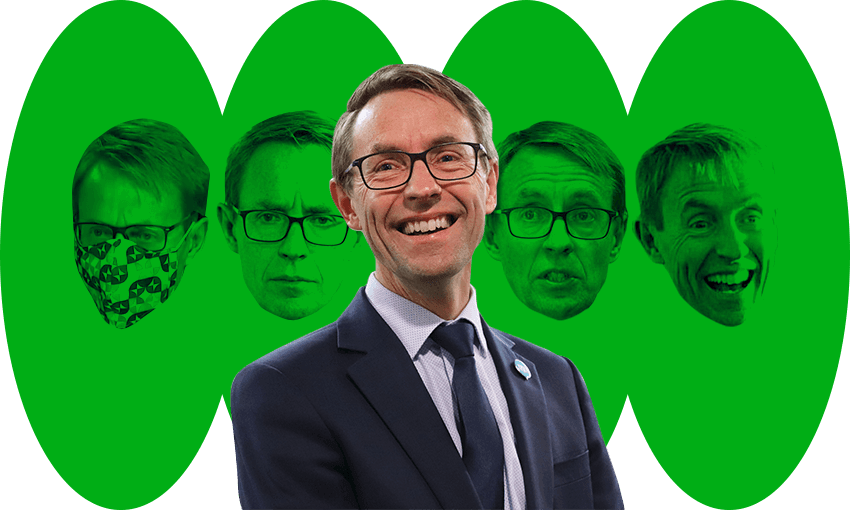 Farewell, Ashley Bloomfield. We knew you far too well

In the early days of the first lockdown, Anna Rawhiti-Connell penned a column that fuelled the emerging mania around a certain public servant. For that she is truly sorry.

On April 1, 2020, the most deranged piece of writing I have ever penned was published. The date holds no irony.

The product of a diseased mind, “The Ashley Bloomfield Show – an ode to Ashley Bloomfield” hit Newsroom, then social media, where it exploded. It went about as viral as a column in Aotearoa can go. Tess Nichol included it in a round up of our infatuation with him for Slate.

This was not the writing of a well-adjusted person. I referred to Ashley Bloomfield by his full name throughout and it became a thing people referenced online. For one last outing and for old time’s sake, I will adhere to this here.

The 2020 piece was the writing of someone with a deadline who was losing her mind. As a columnist in lockdown, who only had a husband and dog to talk to and no world to observe, I was examining every single thought and contemplating whether I could get 800 words out of it.

We weren’t even a fortnight into the first of several lockdowns in Auckland when this piece was published – the jaded, critical husk beasts we were to become still a lockdown or two away. It was early on in the pandemic. I had watched a lot of pandemic movies and documentaries including the Netflix one that basically predicted the whole thing (no one talks about this enough) and was legitimately worried about dying and anarchy. As much as the information conveyed at the 1pm press conferences was important and good, I also tuned in to make sure the TV channels were still broadcasting. The beginning of anarchy, and the descent into eating our pets, is always visualised as dead air on the telly in the movies.

I had also changed my Twitter name to “The Ashley Bloomfield Fan Club”, which I now have to shamefully admit was more of a bit than anything. I received a phone call from a journalist at the Guardian asking me to speak in my capacity as the president of that fan club and had to quickly backtrack and confess it was a joke. She granted me the dignity of reporting that I had “jokingly” changed my handle, but I am still named in the piece as the unofficial leader of the nation’s Bloomfield devotees. My first mention as a writer in the Guardian and I am quoted as saying that Ashley Bloomfield “has nice hair”. A true career highlight.

I remain forever grateful to Mediawatch’s Hayden Donnell who granted me further dignity by  putting “self-aware” in brackets when describing my paean to Ashley Bloomfield in a piece that began to chart the backlash against Ashley Bloomfield’s popularity. But my chickens were coming home to roost and my contribution to the mania that emerged around this previously little-known public servant remains one of my pandemic regrets.

I regret it for two reasons – and that’s hard to admit regarding a very popular piece – but with news of Ashley Bloomfield’s resignation yesterday, it’s probably time to come clean and reflect on that strange, strange time. Columnists seldom get the chance to apply a retrospective eye to things they’ve written because they are so “of the zeitgeist”, but we do impact cumulative effect.

It was only last week that I wrote about my concerns about the celebrity politician and our role in not making the call to public service seem like a trip to high-risk hell. Ashley Bloomfield may be our first and last celebrity public servant. I sincerely believe he didn’t ask for, or want, the pop-culture status he obtained. His tenure may serve as a cautionary tale to others. His resignation and the resignation of other senior officials at the Ministry of Health perhaps points to the toll such public profile takes. It is highly unusual for public servants to be as well known as Ashley Bloomfield, let alone inspire idolatry unseen since the days of the Romans. I’m sorry to all the other leaders of government ministries and departments but I don’t know your names because I live in Auckland, not Wellington, and none of you were unexpectedly called to the podium of truth to steer us through a pandemic. I know a few public servants and I don’t think any of them enter this arena with fame in mind.

I imagine there were days Ashley Bloomfield went home and wondered “WTAF” as cushions, candles and bags were made with his face on them and Twitter whip-rounds were done to buy flowers for a highly paid public servant with gift register obligations. Ashley Bloomfield handled all of this remarkably well (directing the funds raised to charity), but there are few public servants who’ve even had to contemplate that reality, let alone develop a plan to deal with it. If he ever had knowledge of the erotic fan fiction that developed with him in a starring role, he never let on.

The celebrity status I contributed to undoubtedly made Ashley Bloomfield’s job more difficult. It also made the work of those whose job it is to hold the public sector to account more difficult, and that is my second regret. As he gained gargantuan celebrity status, anyone daring to criticise the Ministry of Health was set upon. This was particularly evident in the way people responded to journalists asking questions at the 1pm press conferences. As it turns out, many of them were on the money, particularly questioning around the vaccination rollout. A healthy democracy requires that we be able to hold the government and its ministries to account, especially during times of high anxiety and even higher levels of government control over our lives. Two years and one week on from my column about Ashley Bloomfield, I think it’s crucial we try to remove some of the lenses we had when we were freaked out and relying on the comfort we found in clear and consistent communications from the government and its officials.

In order to move on, we need to shed some of the very natural and obvious grudges we developed during those times when things felt more perilous and dangerous. I spent several months cringing on Twitter after my Ashley Bloomfield piece was published as I watched journalists defend their actions against a prevailing wind I contributed to.

Scrutiny is necessary, important and justified, and we must find a way to allow it to sit comfortably with us, but that doesn’t diminish Ashley Bloomfield’s service over the last two years. He probably expected that scrutiny, and in his responses to criticism you see a man doing his job. I doubt he expected the daily scrutiny or the pitfalls of celebrity status. His tenure must come as close to a tour of duty as work in the public service ever could. If we think we’ve aged five years in two, I imagine Ashley Bloomfield feels he’s aged 10.

In my column in 2020, I said I’d spontaneously combust if I ever met Ashley Bloomfield. I think now, I’d simply shake his hand and say thank you like a normal person who has, as he has, lived through an extraordinary two years where we have all changed, made enormous sacrifices and felt immense pressure. Ashley Bloomfield has handled his mantle extraordinarily well in the most difficult of times. It deserves noting.

So farewell Bloomie with the good hair. We thought we knew you far too well and I’m sorry for that.