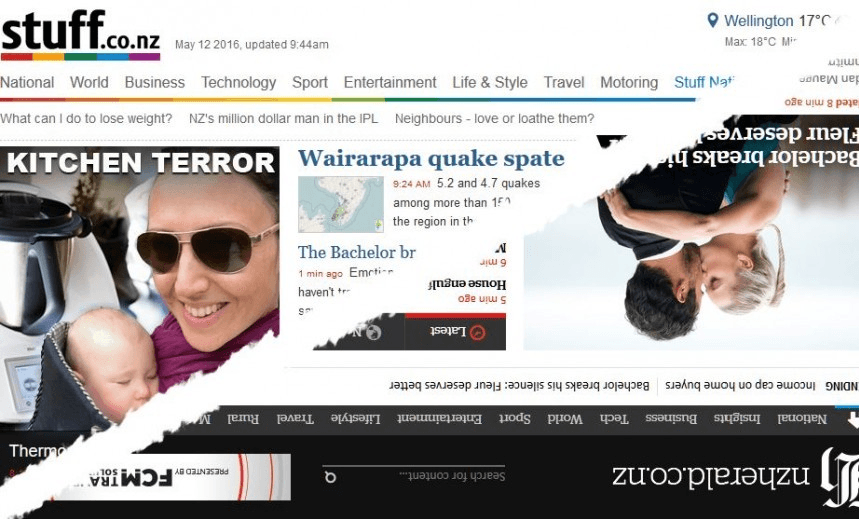 The NZ print media mega-merger is coming, and it fills me with despair

Opinion: The marriage of Fairfax NZ and NZME may make sense in commercial terms, but it’s bad for depth, diversity and democracy, writes Paul Brislen

If you want to know about a burning platform that’s forcing change, talk to a journalist. “Do 10% more with 10% less” has become the new strategy. And that’s in a good year.

Now we’re facing the biggest disruption of them all – the mega-merger of “newspaper giants”, as they were described yesterday on the radio: NZME and Fairfax New Zealand.

This is a really bad idea.

From a purely business perspective I’m sure it all makes sense.

There are some great reasons to merge with your biggest competitor. You get those lovely economies of scale everyone likes to talk about, which generally means fewer staff doing more stuff, and you shrink the competition, which is always lovely. Printing, subbing, head office, hell even the delivery kids on bicycles (long since gone I’m afraid) can all be rationalised and reduced and managed towards the exit. Cost Out! always struck me as a great name for a business magazine. Synergies! Leveraging!

But journalism isn’t just a business. It’s also an essential part of democracy, a check on rampant mob rule, a way of calling those in power to account, a call to action and a place of solace in times of misery. Afflict the comfortable and comfort the afflicted, I was told when I was learning about being a journalist and it’s a guiding light I believe in to this day.

Merging these two media empires will absolutely lead to fewer journalists doing fewer stories and that’s incredibly dangerous on a number of levels.

I was a student working as a waiter in a restaurant I don’t wish to name (let’s call it Pizza Shack to protect the guilty) in Hamilton when I first met a real newspaperman. He asked me what I was studying, and, “What do you want to be when you grow up?” I told him I wanted to be a reporter and he asked why. “To keep the bastards honest,” I told him and he invited me down to the newsroom.

I couldn’t care less about local council matters, but there was a crusty old bloke in the corner who did and he was keeping the bastards honest.

I couldn’t care less about whether the new motorway was going to get built, but someone else did and they were banging on about broken promises and keeping the bastards honest.

I couldn’t care less about football, farming, waiting times at the local hospital, plans to pipe water to Auckland or any host of other tedious and dull issues, but someone there did.

My claim to fame was reading all the submissions to the Commerce Commission on various telco matters. So dry, so dusty, so tedious. But you skip one and it’s curtains. Remember the “ten year regulatory holiday” that the government promised Chorus if it built the fibre network? Nobody would have found out if Sarah Putt hadn’t read to the bitter end of a supplementary order paper that was bigger than the Act itself. You may not care about that, but I’m pretty sure we’re all happy that we don’t have to pay more than we should for a fibre network.

But the new world of journalism is online and it’s teeming with “content”, right? And the problem, well that’s easy – it’s Google and Facebook who are stealing our content and giving it away and taking the money out of the market.

I get my news from Twitter but Twitter doesn’t write it. Matt Nippert writes it, or Demelza Leslie or Susie Ferguson or any one of dozens of other journalists I follow and who link me to great stories that I would struggle to find any other way. But Twitter isn’t the enemy either.

There is an enemy and that enemy is mediocrity. It’s pap and crap and fluff and listicles and clickbait and You Won’t Believe What Happens Next. The enemy is pretending cat videos are important. They’re fun and entertaining but they’re not important and somewhere down the line we’ve lost sight of that.

The what (and the who, where, when and how) has all migrated to the web and rightly so. I get alerts to my phone to tell me about plane crashes, Reserve Bank decisions, even (god help me) whether some guy is with some girl or not.

The enemy isn’t Google or Facebook any more than TV was or radio before that. The enemy is treating your readers like idiots and offering them stories about cats we read online yesterday. I’m often gobsmacked to find not only news stories about Twitter exchanges (Jemaine Clement, take a bow) but worse, stories that explain the jokes on Facebook for all to see. I had a friend at school who did that all the way through a movie. It was annoying then and it’s annoying now.

The Commerce Commission will be looking at this proposal I’m sure. And I’m equally sure they’ll do a region-by-region analysis of the nature of the competitive market and find there isn’t one. NZME has Auckland and the Herald, Fairfax has Wellington and the Dominion Post, Christchurch and the Press, and never the twain shall meet. Outside the Sunday papers there’s little sign of a competitive market.

But for me this isn’t simply about competition, it’s about diversity and depth. It’s about doing more, not cutting costs. It’s about telling New Zealand stories, about analysis as much as news, it’s about quality, not cost out.

I want more journalists poking their noses into more corners, stirring up more shit. I can’t help feel that won’t happen if this merger goes ahead.