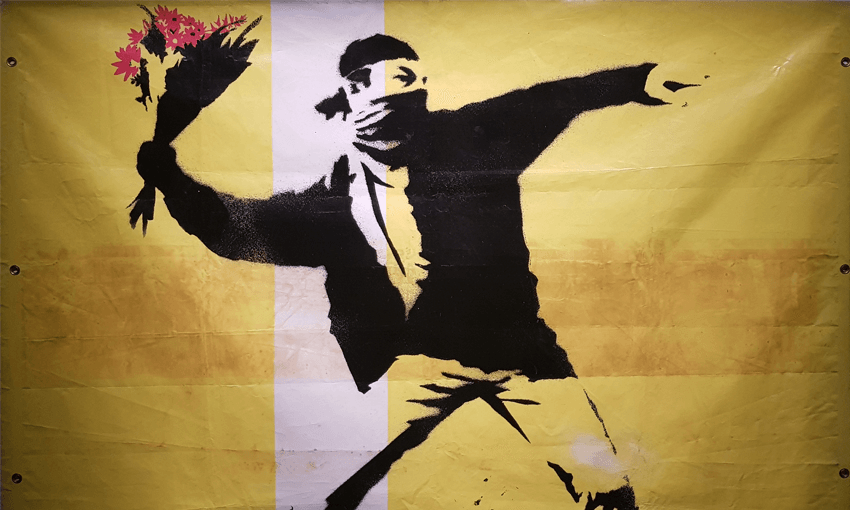 The best of The Spinoff this week: boobs, beers and Banksy

Louisa Woods: How to talk to your children about Logan Paul’s suicide video

“I’m not going to debate whether or not the video should have been posted. It should not. Apart from the utter disrespect shown to the man and his family, the lack of any content warnings exhibited a complete disregard for those viewers whose lives have been affected by suicide. There’s also a considerable body of research to support the fact media coverage of suicide, when presented in certain ways – including sensationalising the events, showing or discussing in detail the method used to end the person’s life, and sharing the information in a prominent forum (all of which apply to Logan Paul’s video) – can increase suicidal ideation and behaviours.”

Kristin Hall: When will New Zealand finally grow up about boobs?

” I am from New Zealand, a place where cow tits and their by-products are a national obsession but human tits are like fleshy social pariahs.

Until I began travelling across Europe in April last year, I had no idea that countries outside of New Zealand weren’t equally scandalised by boobs. You can imagine my shock when in France, Spain, Italy, Greece, and pretty much every other country that’s warm enough to warrant it, there were mammaries dangling uninhibited as far as the eye could see.”

David Cormack: Getting paid is hard to do: Why being a small business owner in New Zealand sucks

“I’ve been told that McKinsey, a global management consulting firm, has been visiting larger New Zealand organisations and helping them “improve efficiencies” which means ways to save money. But they never recommend the easiest way to save money which is to reduce dividends to shareholders and focus the money on the people actually doing the work. McKinsey has reportedly been recommending this 60-120 day billing cycle as a means of effectively having a line of credit from small businesses, and this money can be kept, held and used to make more money. Meanwhile the “backbone of the economy” shrinks, and the country starts looking like the hunchback of Notre Dame.

We had a client who told us exactly this: because we’re a small business and they were a large business, we didn’t have any power to tell them to get bent. And that’s the rub, isn’t it?”

Don Rowe: The Banksy exhibition is really just a warm-up for the gift shop

“’Writing graffiti is about the most honest way you can be an artist,’ Banksy is quoted proclaiming from the wall at one point near the start. ‘It takes no money to do it, you don’t need an education to understand it, and there’s no admission fee.'”

“The admission fee for The Art of Banksy exhibition is $37.50”

Danyl Mclauchlan: Wolff’s tale of the Trump clusterfuck is an instant classic, and strangely comforting

“A witty, talented gossip and media columnist and author with a nasty reputation for breaking embargos, burning sources, attributing off-the-record quotations and generally breaking all the rules of professional journalism, Wolff is the reporter the Trump administration bafflingly entrusted with inside access during the transition and first year of his presidency.

An instant classic of political reporting, The Fire and Fury is not so much an insight into the Trump administration as it is a detailed confirmation that it functions exactly how you imagine, and exactly how it’s been reported for the last 12 months: a rolling, brawling, ever-widening clusterfuck of incompetence, infighting and chaos, which Wolff documents with forensic detail and acidic prose.”

Emily Writes: 10 parenting styles that are definitely a thing and aren’t made up by Emily Writes

“What’s your parenting style? Are you an attachment parent? A helicopter parent? A free-range parent? An authoritative parent? An evolutionary parent? A paleo parent? A tiger parent? Having a parenting style is a great way to find your people and/or feel smug at the kindy gate – and luckily, there are new ones popping up all the time. Here are ten that Spinoff Parents editor Emily Writes has  uncovered, all set to take the parenting world by storm.”

“You know how in movies a character walks into a bar and says “I’ll have a beer thanks” and the bartender immediately stars pouring one, despite at no point specifying what brand or style of beer they would like? I reckon that’s because they’re pouring Lion Red. It’s just bang on, definition beer. Of all the beers, it is the Median Beer.

It’s got just enough body to have some flavour, just enough bitterness to be refreshing and crisp. It’s not as tasteless as an Export Gold, but it’s not as flavoursome as… well, good beer. Of all the generic NZ draught style beers, Lion Red is the most generic.”

Jacquelyn Collins: No, there’s no such thing as testosterone surges in young children

“I’m a very lucky and frequently exhausted mother of four-year-old twins, a girl and a boy. And in Facebook parenting groups I often see fellow parents of preschoolers ask for help with their kids’ challenging behaviour. If the child is a boy, somebody will invariably remark that four year old boys have a testosterone surge, and that this affects their behaviour and makes them really challenging, and therefore you should just ‘hang in there! [smiley face]’.

The testosterone surge is blamed for anything a boy of that age does – from punching his sister in the face to doing a wee in an inappropriate place. Has your son laughed at a fart joke? Blame the surge. Has he ignored your request to pick up toys? That’s the surge talking. Oh, he deliberately poured a smoothie all over the dog? S.U.R.G.E.

But here’s the kicker: there isn’t a testosterone surge at the age of four, at eight, or at any other stage before puberty.”

“Recently, when it came to light that a Waiheke shopkeeper was selling Golliwogs I questioned on my social media whether it was appropriate.

Someone messaged to tell me that my comments were disgusting and that her nana wasn’t a racist because she’d made her a lovely Golliwog. While I wasn’t having a go at anyone’s nana or family, the truth is they are not benign, no matter how much we once loved them nor how innocently. I had two of them! But just because we’ve always done things a certain way, it doesn’t mean we have to keep doing things that way mai ra ano. Ka pai if that present from your nana symbolises love.

In that spirit we must encourage others not to use symbols of racism and bigotry as tokens of love in the future.”