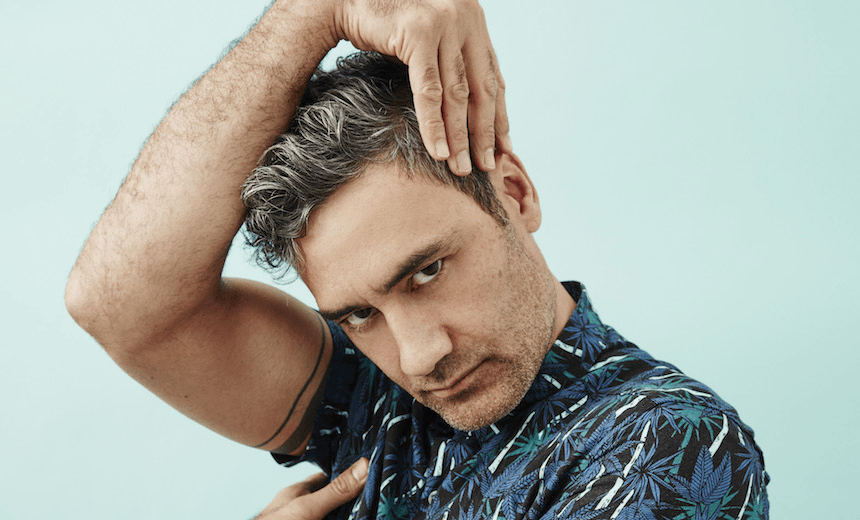 Taika Waititi of ‘Hunt for the Wilderpeople’ poses for a portrait at the 2016 Sundance Film Festival Getty Images Portrait Studio Hosted By Eddie Bauer At Village At The Lift on January 22, 2016 in Park City, Utah

Taika Waititi of ‘Hunt for the Wilderpeople’ poses for a portrait at the 2016 Sundance Film Festival Getty Images Portrait Studio Hosted By Eddie Bauer At Village At The Lift on January 22, 2016 in Park City, Utah

Emily Writes: Hey Mojo, if you can’t pay your staff properly maybe you shouldn’t be in business

“I’m thoroughly confused by employers who insist that no business model can ever support paying living wages – especially since many, many, many businesses do pay their employees living wages.

Could it be – and now, I don’t want to be inflammatory – but could it be that you’re just shit at business if you can’t even pay your staff properly and you think that’s acceptable?

Now, now, calm your tits. I know that the first response I’m going to get is “I pay people before I pay myself!” and guess what Russ? That’s what being in business is. Eat it. When the rewards are high, you reap them – because you’ve put in the hard yards. And when it’s rough, you ride that, because you hold that risk. Risk and reward. If you can’t handle it, don’t do it.”

The Spinoff: Irrefutable proof Taika Waititi is wrong and NZ is not racist as fuck

“Taika Waititi, who was recently denounced as an altogether disloyal and unthinking human billboard for 100% Pure NZ after saying something else not entirely complimentary, recently told Dazed New Zealand is ‘racist as fuck. I mean, I think New Zealand is the best place on the planet, but it’s a racist place. People just flat-out refuse to pronounce Māori names properly. There’s still profiling when it comes to Polynesians. It’s not even a colour thing – like, ‘Oh, there’s a black person.’ It’s, ‘If you’re Poly then you’re getting profiled.’’

But turns out he’s not right about that. New Zealand is not racist as fuck. We know this because we have searched not very far and not at all wide through the comments in the NZ media, which confirm 500% our total non-racist-as-fuck-ness.”

At the end of this letter you will see some of the names of Pasifika people you have condemned to hell along with some of our allies.

We want to let you know that your stance towards our LGBTQI+ people is the antithesis of being Christian.

We are incredibly disappointed in your recent comments and soon after you made them, artist activist Tanu Gago encouraged Pasifika people to have the “ake/ate” to reply to you.

We want you to know that the stakes are high for us in Aotearoa, Australia and in the Pacific.”

‘I started to feel really self-conscious. I just wanted to go home at that point and hide. Let alone be filmed and aired to the nation.’ Later during the production, still in Thailand, she claims that she and Hoskins were told once more to watch their weight, because ‘a couple of kilos of weight gain looks like 20kgs on TV.’ Thompson was a size eight at the time and had a history of body dysmorphia. ‘I just remember crying and not being able to stop. I felt like a whale.’ She refused to eat dinner that night and remembered feeling “disgusting” at the next cocktail party.

‘I knew I needed to go home after that. If I had have stayed it would have escalated.'”

Wayne Mapp: Ardern and Twyford are betting their futures on voters backing their zealotry

The stakes of the next election can  be found in the recently announced housing plan for Unitec and a transport blueprint that prioritises trains and bikes over cars. Labour is moving into the dangerous territory of telling people how they should live, writes National minister Wayne Mapp.

“I’ve been in London for a while now. It can be tough being so far from New Zealand. The grinding cold. The poison air. The constant stream of people saying “y’right?” instead of “hello”. It’s easy to get a bit down. But lately I’ve been cheered by a persistent taste of home away from home. Every time I check my phone, it’s there. On Twitter. Facebook. Any news site. It’s there. A familiar sense of gnawing dread. A nostalgic hum of hair-pulling frustration. It’s the unique concoction of feelings I get only when my home country engages in that time-honored Kiwi tradition: an unrelentingly stupid argument about transport policy.”

After the minister suspended its profiling pilot, Immigration NZ has released a spreadsheet and a briefing note. Tze Ming Mok is deeply, deeply unimpressed.

Alex Casey: Here’s why everyone is mad about the rude bum show

“Everybody knows that absolutely nobody has genitals. In fact, nobody has ever been naked. Before birth we are prepped with an in-utero uniform of jorts and a high vis vest, gifted to every growing foetus from Cape Reinga to Bluff. It is in this climate of proud, nation-wide never nudes that Naked Attraction came streaking onto screens last year, raking in over 500 complaints to TVNZ and 13 complaints to the Broadcasting Standards Authority. It’s porn! They shrieked, layering on their 13th t-shirt. Think of the children! They muttered, rolling on a third pair of socks. THINK OF THE BUMS they hollered, hoisting up their 18th century bloomers.”

“From the very first game, itself a perfectly sturdy if a little unwieldy turn-based battler, the Suikoden series was dead set on building a massive world and populating it with countries, cities, armies and people who felt genuinely alive. And from the very first scene of the first game, where Tir McDohl wakes up and sets off for his first day at work for the Imperial Army and goes to see the King of the Scarlet Moon Empire, you know the game is setting itself up for something that might be legitimately world-changing. It’s got political intrigue, it’s got people dying for their nations rather than for their loved ones, and it’s got power-mongering.

Which, in all honesty and fairness to the genre, every roleplaying game attempts to do.”

“You’re getting married. It’s arguably the most important day of your life, so what one song can encapsulate the importance of this particular day, the days that came before it, and the days to come with your soon to be declared spouse? That’s a whole lot of symbolism to fit into a three-minute, forty-five-second tune.

Wedding music often leaves nearly-weds feeling panicked, causing a flurry of emails to come through our inbox asking if they’ve made the right choice, is it too late to change their minds, what did our team play at our weddings?

Here’s what we’ve observed from the many weddings we’ve pulled together for couples across the country.”

Toby Manhire: Who is Marama Davidson and what kind of a co-leader will she be?

The Green membership has overwhelmingly backed Marama Davidson to be the party’s co-leader, delivering her a delegate victory of 110-34 over the only other contender, Julie Anne Genter.

Addressing an audience in Auckland late on Sunday morning, Davidson called it “the greatest honour of my life”. She fills a vacancy that opened in the leadup to the last election, when Metiria Turei resigned following a backlash over her admission of historic benefit fraud. She joins James Shaw who for the last eight months has unicycled a bicycle made for two.

What do we know about her?