Did a group of plucky young New Zealanders really save the Pacific from nuclear testing with some boats, bravery and beer? Not quite, write Sylvia Frain and Rebecca H. Hogue.

Who doesn’t love a beautifully made commercial that makes us feel good about New Zealand and our place in the world? The latest in this particular genre is an emotional 90-second Steinlager ad directed by Lee Tamahori and being rolled out to cinemas, television and social media ahead of the America’s Cup.

The ad tells the story of New Zealand activists who in 1995 sailed to Moruroa Atoll to protest French nuclear testing in the Pacific. They went “their own way”, the ad tells us – drawing a parallel between the sailors on the flotilla and New Zealand’s broader yachting culture – and “there have been no nuclear tests in the Pacific since”. Steinlager’s depiction of New Zealand’s small yachts facing off against military warships is misleading, to say the least. Not only is it factually incorrect (French testing did not stop immediately after the flotilla, but continued until 1996), it distorts the truth about the campaign against nuclear testing in the Pacific. Among those outraged are Peace Movement Aotearoa, which has filed a complaint to the Advertising Standards Authority over the ad’s misrepresentation of history.

In the Steinlager version of the story, a few brave Kiwi blokes (and a token woman) set out on a daring adventure in 1995 and brought French nuclear testing to an end. That is a fiction that erases over 50 years of Indigenous activism throughout the Pacific, not to mention decades of activism by Māori, and their Pākehā allies, in Aotearoa itself. Pointing out the problems with the Steinlager ad in no way discredits the contributions New Zealanders made to stopping nuclear testing in the Pacific. But the real story of the anti-nuclear movement in the Pacific is one of tireless campaigning by Pasifika and Māori, and vital cross-cultural collaborations and alliances that continue to this day. All of this the ad ignores.

While the 1995 flotilla did draw global media attention to the tests, that is far from the full story. Protests against nuclear proliferation had been a key element of social justice campaigns in Aotearoa well before 1995. France detonated its first nuclear test in Mā’ohi Nui (French Occupied Polynesia) in 1966, and anti-nuclear action was well underway in Aotearoa by the early 1970s. The documentary Mururoa 1973 followed the journey of the protest boat Fri from Northland to Mā’ohi Nui and highlighted the effects of nuclear proliferation by interviewing Indigenous people there. It aired on New Zealand primetime television and garnered international attention.

In the next decade, the South Pacific Forum began to meet on the issue of nuclear weapons, and the Rarotonga Conference in 1982 led to the eventual signing of the Treaty of Rarotonga, also known as the South Pacific Nuclear Free Zone Treaty. This treaty formalised a Nuclear-Weapon-Free Zone which bans the use, testing, and possession of nuclear weapons within the borders of the zone. By 1985, largely due to the efforts of the Nuclear Free and Independent Pacific movement, and the outrage over the bombing of the Rainbow Warrior, New Zealand had established itself as a nuclear-free country. Auckland was central to environmental activism in the Pacific, its harbour becoming a launching site for many protest and rescue missions.

‘Let me be more specific, get out of the Pacific.’: Herbs’ anti-nuclear protest song ‘French Letter’ (1995)

In 1995, for the second time in just over 20 years, New Zealand sued France in international court over France’s nuclear testing programme. This lawsuit capped decades of anti-nuclear protest against the effects of French nuclear fallout across the Pacific. Earlier that year, in a dramatic shift, President Jacques Chirac had announced that eight nuclear weapons would be detonated in Māʻohi Nui starting in September. Riots broke out across Māʻohi Nui and concerns over the impact of nuclear weapons in the region consumed the foreign policy efforts of nearby countries such as New Zealand and Australia. Greenpeace’s new ship Rainbow Warrior II sailed into Mā’ohi Nui waters as part of the Moruroa Pacific Peace Flotilla, the subject  of the Steinlager ad. The Rainbow Warrior II planned to come ashore on Moruroa Atoll on July 10 1995, the 10-year anniversary of the Rainbow Warrior bombing.

The flotilla arrived just outside the 12-mile exclusion zone around Moruroa Atoll and dangled underwater microphones to detect underground blasts. The French navy rammed the ship, then commandos stormed aboard, tear-gassed the crew and seized the ship. It was far from the peaceful face-off depicted in the Steinlager commercial. France finally ended nuclear weapon testing the next year only after condemnation from their European allies – and after  the development of computerised simulation technology meant physical testing was no longer considered necessary. 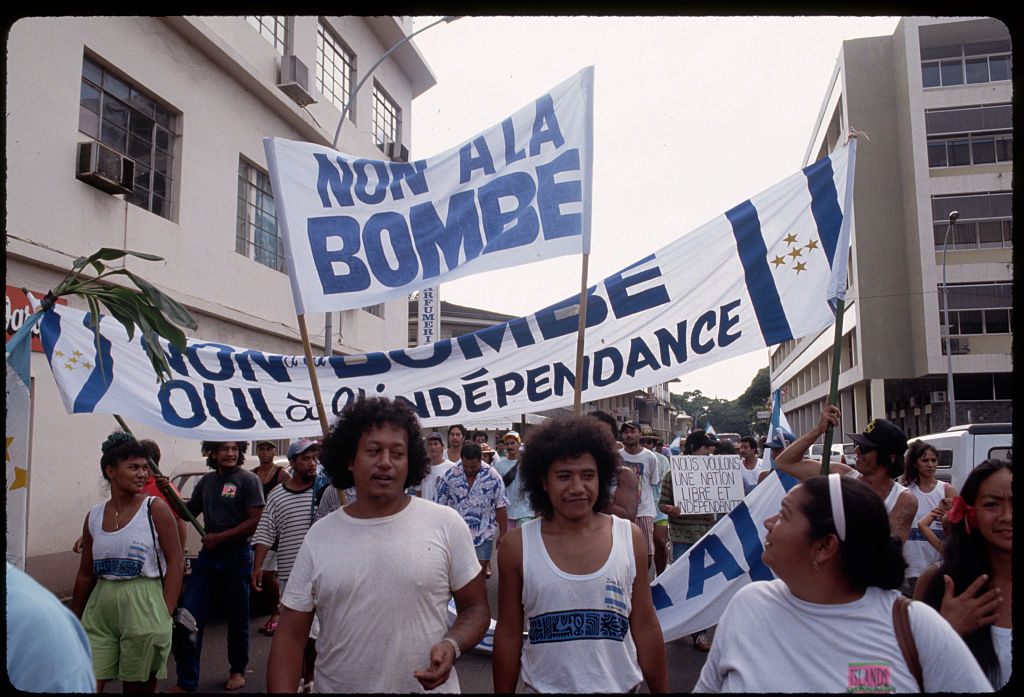 By highlighting only the actions of New Zealanders, Steinlager’s ad reinforces colonial ideologies while overlooking the Pacific experience of anti-nuclear activism. The commercial uses the French colonial spelling – Mururoa – rather than the spelling widely used by Pacific peoples – Moruroa. It ignores the work of other Pacific Islanders like the “dream team” from the Cook Islands who sailed from Rarotonga to Moruroa in a huge, Pacific-wide campaign called “Vaka ki Moruroa.” The local protest effort was aided by the Cook Islands government, which arranged for the voyaging canoe Te Au o Tonga to join the protest flotilla.

While it should be acknowledged that the ad was made with the support of two members of the peace flotilla, others are hugely upset by it. Thomas Everth, who sailed to Moruroa in 1995, is among those who are angry about the peace flotilla being used to sell beer. He’s calling for Steinlager and DDB to donate $1 million to help counter drug and alcohol abuse. “I am angered that you abuse what was an important political effort for a cheap beer ad,” he wrote. “I am not letting you abuse the sacrifice and hard work of the hundreds of people who sailed thousands of miles to make our voices heard for selling a drug that is addictive and causes death, ill-health and misery in our communities. I challenge you to make up for it, by donating.”

It is time to tell the real story about nuclear testing in the Pacific, and the people who led the resistance to them. As recently as January 2020, the people of Tahiti were still calling on France to clean-up the radioactive material on Moruroa. While this may not be the tidy ending Steinlager would like, it’s the truth.